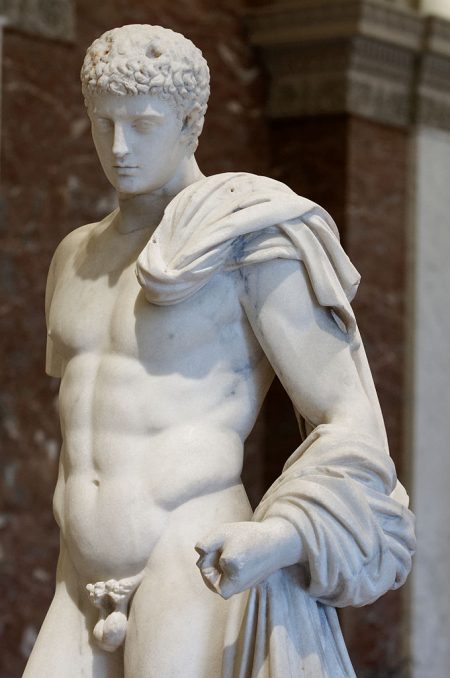 Many men feel they must work and achieve to be manly (virtuous). That oppressive social construction of manhood is pervasive historically — from ancient Greece and ancient Rome to present-day societies. Social depreciation of men’s intrinsic value is associated with acute sexual welfare inequality by gender. Critical responses to these social injustices are regrettably rare. About two millennia ago, the eminent Roman historian Titus Livius (Livy) provided a brief, subtle critique of social instrumentalization of men’s bodies. In twelfth-century Byzantium, the brilliant literary writer Theodore Prodromos in his novel Rhodanthe and Dosikles more transgressively asserted that men and women have equal intrinsic bodily beauty.

Close to the beginning of the first book of his nine-book novel Rhodanthe and Dosikles, Prodromos described a girl’s beauty. The banality of describing feminine beauty implied the need for extraordinary rhetoric to be interesting. The narrator described the maiden Rhodanthe:

The girl’s beauty was something extraordinary,
an august figure, a replica of a divine image,
wrought in the form of Artemis.
Her flesh mimicked white snow,
the congruence of her every limb was consistent,
each dexterously linked to the other
and every one fitting together gracefully.
Her eyebrows were naturally well-drawn
in the graceful imitation of a half-circle,
her nose somewhat hooked and her pupils deep black,
circles were inscribed on her cheeks,
four on both but two on the one spot;
of which the outer and more extensive
one might say were snow drifts
while the inner were, as it were, glowing
with the self-combusting coals within.
A mouth that was quite narrow and closely compressed;
elbow, arm and harmony of fingers
were wrought by a natural craftsman;
the posture of her ankles was trim, a support for her legs,
the foundation one might say of the structure.
And all else was proper, and every feature beautiful. [1]

When a savage barbarian robber captured Rhodanthe, he was so overwhelmed with her beauty that he thought she was a goddess. He freed her from all her chains, for he didn’t want to risk the danger of keeping a goddess in chains. But he kept her captive.[2] Most men want to have a beautiful woman.

Dosikles, who loved Rhodanthe, compared himself to her. He described her face as beautiful and his own face as not repulsive:

Rhodanthe’s complexion is beautiful;
for it is not possible to remove or add anything
from its excellent and perfect composition,
for the geometer nature had constructed it
beautifully and according to the rules.
But neither is my face besmirched,
nor is my appearance strange and repulsive.

Dosikles depreciated his own beauty. He was, according to the narrator, a “comely youth.” The barbarian robber chief appreciated upon first sight of Dosikles and Rhodanthe the beauty of both:

The robber chief saw Dosikles,
and then saw Rhodanthe immediately afterwards.
He could not have been more astonished,
for both were so handsome in appearance.
Astounded by the grace of their countenances,
“This lovely couple,” he said

In contrast to the barbarian, the learned Hellenist Dosikles, imbued with social instrumentalization of men, differentiated beauty by gender. He associated masculine beauty with violence against men:

For masculine beauty has a different quality of steadiness,
powerful strength, bravery in battle,
unshakeable might, a sturdy right arm,
a steadfast resistance in the face of battle,
a blade reddened with enemies’ blood,
a sword satiated with hostile flesh.
If someone were to make a judgment on beauty by masculine standards,
he would consider me handsome to look at.
For often in many battles
I have received gloriously many crowns.
The bronze-dipped tip of my dagger has fed
on much flesh from many enemies,
has quaffed copious streams of blood,
and has feasted on the deaths of many barbarians.

Dosikles then all but exposed war-wounds on his chest. He described his father Lysippos, named after a classical sculptor of beautiful figures, as an excellent tutor in martial skills. Rhodanthe’s mother was Phryne. In classical Greek literature, Phryne was a courtesan who, while being tried on a capital charge, bared her breasts to the jurors. They then regarded her as like a goddess and acquitted her. With contrasts in parental names and his own rhetoric, Dosikles affirmed classical gender valuations of men and women.

Dosikles subsequent action showed that he was far from the programmed warrior-drone of a Spartan mother. Another barbarian group conquered the city where Dosikles and Rhodanthe were held captive. The raiders placed the captive women and men on separate ships. Being again separated from Rhodanthe in incredible events of serial brutality and captivity drove Dosikles to deep despair:

When Dosikles realized the division
he said, “But if you tear me away
from my maiden sister {Rhodanthe}, leader of the satraps,
I shall put an end to the drama of my fate
by throwing myself into the midst of the sea.”

That’s a more human reaction than to respond with attempted violence as a unarmed captive facing overwhelming armed forces. Warriors nurtured on the ethos of Spartan mothers wouldn’t be captured alive. They wouldn’t express despair within utterly hopeless circumstances. The contrast between Dosikles and an inhumane brute is explicit in the immediately subsequent lines:

As he {Dosikles} said this an uncouth barbarian
who was standing nearby, a huge ruthless giant,
struck the handsome young man in the face
and threw him against his will into the middle of the vessel.

The barbarian wounded Dosikles face, yet Dosikles didn’t lose face with Rhodanthe. She grieved for his injury. With his words and actions, Dosikles implicitly showed that he too had an emotionally capable heart.[3]

There was in my country a noble youth,
Dosikles by name, comely in appearance,
with his beard just blooming on his chin
and his face gracefully surrounded
by the first down on his jaw,
with hair, ye gods, beautiful to see
(how it curled!); the blond hue —
its beauty is amazing; his whole complexion —
incredible beyond description; his whiteness —
quite astonishing; his redness —
altogether impossible. What should I say
of his eyes, his cheeks, his eyebrows, his lips,
his sturdy, well-proportioned figure
close kin to a cypress,
his shoulders, his ankles, his hands, his feet

Descriptions of beautiful woman in classical and medieval literature typically proceed from the top down (from hair, forehead, or brow). The narrator’s earlier description of Rhodanthe had that direction. Rhodanthe herself, in describing Dosikles’s beauty, apparently was too emotionally agitated to follow that order. She joyfully imagined, as women continue to do despite present-day tyrannical college sex tribunals, her beloved making amorous initiatives without first asking for affirmative consent:

his hand is beautiful, but much more beautiful
when it has made advances, moved by forces of nature
(I blush to speak of advances,
but yet I am in love, Myrilla, and what have I to lose?),
and it is clinging enthusiastically to my neck.
His lips are lovely, but so too is his mouth;
and when they move and make sounds,
calling and laughing and kissing me,
oh indeed how great is their beauty.
But why should I go on and why should I speak at length?
His whole bearing was that of a god.

Rhodanthe didn’t associate masculine beauty with martial prowess. She described Dosikles’s beauty much like a man would describe a woman’s beauty. Unlike Dosikles himself, Rhodanthe valued Dosikles’s intrinsic bodily beauty.

Other maidens responded to Dosikles’s beauty as did men to Rhodanthe’s beauty. When Rhodanthe and Dosikles finally returned to their home city, the city held a celebratory procession and festival. The narrator observed:

the entire throng of maidens in the procession
who gazed at Dosikles with wide-open eyes
received a massive arrow in their souls
(the kind that Eros always shoots —
poisoned, bitter and enflaming hearts).
For one, abandoning modesty,
came up close and gazed at him with insatiable eyes,
as if by looking from close by she would really see clearly;
another came up and touched his tunic,
and received a second arrow from the contact;
another, in a far greater frenzy than the other two,
breaking all the restraints of decency
and losing her sober wan complexion,
came up and kissed the youth,
and was pierced in every part of her soul.

Men typically enjoy gazing upon beautiful women. A particularly bold man might kiss a beautiful women without her affirmative consent. However, the male gaze and male amorous initiative have become subject to oppressive censure, if not actual criminalization. At the same time, women gaze upon men and amorously assail men without men’s affirmative consent, yet that can scarcely be said in respectable public discourse today. With amazing boldness, Rhodanthe and Dosikles represented women and men’s bodily beauty as similarly moving men and women.[4]

A man’s virtue exists in his having the intrinsic bodily beauty of a man. A man’s value shouldn’t be reduced to being an instrument for fighting wars and providing resources to women and children. In his brilliant twelfth-century Byzantine novel, Theodore Prodromos offered that critical perspective on gender. It remains deeply relevant today.

[1] Theodore Prodromos, Rhodanthe and Dosikles ll. 1.39-60, from Atticizing Greek trans. Jeffreys (2012) pp. 21-2. For background on Prodromos and this novel, see note [1] to my post on the thwarted amorous meeting of Kratandros and Chrysochroe. Byzantine novels are highly rhetorical. Roilos (2005) Ch. 2. Ekphrasis was a well-established rhetorical practice.

Despite their deep engagement with rhetoric, writers in Byzantium described female beauty more truthfully than is generally acceptable today. See the epigram on Archeanassa of Colophon, the social construction of misogyny, and Marciniak (2015).

[3] Roilos recognized the irony in Dosikles’s self-presentation, but mis-interpreted it:

Dosikles indulges in a pompous and detailed enumeration of his heroic achievements in a manner recalling Daphnis’ naive self-acclamation in Longos’ novel. Seen, though, in retrospect from the narrator’s point of view, Dosikles’ self-praise appears as a proleptic ironic delineation of his ēthos. … Dosikles’ future actions prove him unworthy of his self-encomium. In book six, when Artapes separates the two lovers, Dosikles’ heroism is reduced to a timorous threat of suicide, which is responded to with a strong strike by a giant barbarian (6.182–186). This incident constructs a real and therefore conclusive anaskeuē (refutation) of Dosikles’ verbose rhetorical self-presentation.

Prodromos himself seems to have been highly capable of emotional expression. Consider an apparently autobiographical poem by Prodromos:

The poet’s powerful invective against the illness concludes with an almost elegiac expression of his weariness and of the dejected conditions of his body, which have been aggravated by years of poverty and exhausting studies …. he manages to express feelings and to convey a sense of his world, sometime with strong emotions, very often with wit and intelligence.

[image] Statue of Hermes. 2nd century GC copy of a fourth-century BGC sculpture by Lysippos. Called the Hermès Richelieu, the statue is held in the Louvre (Paris), item Ma 573 (MR 272). The statue’s missing penis aptly represents historical disparagement of men’s penises, including by men’s own wives. Photo thanks to Marie-Lan Nguyen and Wikimedia Commons.

12 thoughts on “Prodromos with Dosikles challenged instrumental valuation of men”