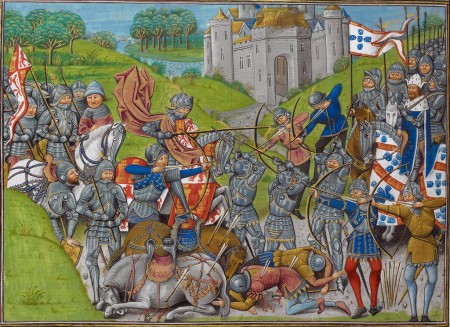 The knight Jean I Le Maingre, called Boucicaut, rose to become Marshal of France in 1356. The name Boucicaut came from an obscure French term for a fishing basket.[1] The knight Boucicaut was as skilled in catching women as he was in fighting men. Boucicaut had a son, Jean II Le Maingre, also called Boucicaut. The older Boucicaut died just two years after his son was born. Without his father’s guidance, the younger Boucicaut grew up to be a benighted chivalrous knight who spent his life in abject service to women and in brutal fighting with men.

Just one story makes clear that the older Boucicaut rejected the man-oppressing ideology of courtly love. One day at a feast, three eminent ladies chatted at length with each other about their amusements. In response to one lady’s verbal challenge, each confessed to having a man seeking her love. Then they agreed to reveal their lovers’ names. The first said her lover was Boucicaut. The second said Boucicaut, too. The third said her lover was Boucicaut as well. Boucicaut wasn’t a man pining away with one-itis. Like the great teacher of love Ovid, Boucicaut sought them all.

The ladies were outraged at Boucicaut’s behavior. They declared:

Certainly he isn’t as loyal or true as we supposed. He is a mocker and deceiver of ladies. Let’s send for him. [2]

With the intensification of gynocentrism, medieval men were required to come when ladies beckoned them. Boucicaut came and said, “My ladies, how may I please you?” The ladies ordered Boucicaut to sit at their feet. He refused. He insisted on sitting on a chair or stool.[3] One of the ladies then interrogated him:

How is it, Boucicaut, that we have been so deceived by you? We thought you were faithful and true, but you’re nothing but a mocker of ladies. …You desired my fair cousin here, and me as well, and you swore to each of us that you loved her best above all creatures. This was a great lie. You are false and deceitful and you ought not be counted among good knights.

This was in the days before the criminalization of seduction. Yet Boucicaut still felt the need to defend his behavior and his interest in good nights. He declared:

you may have spoken, but you aren’t in the right, and I’ll tell you why. At the time that I said so to each of you, it was the truth. And therefore you’re wrong to think of me as deceitful. But I suppose I must bear with your judgment.

Even a famous knight cannot argue with women. All men must accept women’s judgments.

Men, however, should not accept being treated as chattel slaves. One of the women declared:

Let’s draw lots for him, and the one with the shortest straw will have him.

Boucicaut was not a piece of meat. He was a man, a human being with his own wishes and desires, a person with as much God-given dignity as any woman. Boucicaut rightly responded:

Nay, my ladies, by the sacrament of God, I am not to be dealt with this way. There isn’t a woman here with whom I’ll tarry.

Boucicaut then got up and walked out. That was a great moment in men’s history. But few persons today know about it, because history from its beginnings has revolved around women.

The Boucicaut most prominent in history is the younger Boucicaut, Jean II Le Maingre. He was born in 1366. His father, the older Boucicaut, died just two years later. The fatherless younger Boucicaut became a bellicose knight. At the age of twelve he participated in a battle in Normandy as a page serving Duke Louis of Bourbon. At age sixteen, he was knighted on the eve of the Battle of Roosebeke and reportedly killed a man who had chided him as being merely a child. By age twenty-five, Boucicaut had fought in three campaigns against the Lithuanians, had participated in two battles against the English, and had soldiered in the Balkans as a mercenary. King Charles VI appointed the twenty-five-year-old Boucicaut marshal of France. Boucicaut subsequently participated in extended military actions against the Turks, war against the Venetians, and a variety of raids in the Mediterranean. In 1415, Boucicaut was captured in a battle with the English. He died a prisoner in England in 1421. He had spent his whole life engaged in violence against men.[4]

As Suero de Quinones would subsequently do, the younger Boucicaut staged an extravagant public ritual of men brutally tilting at other men. In the spring of 1390, Boucicaut and two fellow knights challenged to single combat any man, French or foreign, with any agreed weapons. In the resulting tournament at Saint Inglevert near Calais, Boucicaut fought single combat with eighteen men. He knocked off his opponent’s iron helmet twelve times, and had his helmet knocked off seven times. Blows to the head are not good for men’s health. Further underscoring the extent of the violence, Boucicaut broke five lances against his opponent’s body, and had five lances broken against his own body. Boucicaut struck three of his opponents with such force that he unhorsed them.[5] Treating violence against men as sport in medieval Europe corresponds to relatively little concern about violence against men today.

The younger Boucicaut was also a leading woman-server. When informed that he had returned the curtsies of two women who were prostitutes, Boucicaut declared:

I would rather have paid my salutations to ten harlots than have omitted them to one lady worthy of respect. [6]

In 1399, Boucicaut founded a chivalric order to defend women: Emprise de l’Escu vert à la Dame Blanche (“Enterprise of the Green Shield with the White Lady”). The knights of this order pledged to defend the honor, fame, praise, and property of ladies. Other knights waited for a lady to ask him to fight for her. The knights of Emprise de l’Escu vert à la Dame Blanche publicly declared in advance their willingness to fight for women’s interests.[7] That was in a society in which noble men had a life expectancy nearly ten years less than noble women. These medieval knights were forefathers of today’s ignorant, benighted warriors for “gender equality for women.”

The older Boucicaut could have taught his son the younger Boucicaut much about how to have a long, pleasurable life. Fatherless men easily become servants of the gynocentric order. It must be overthrown. Let the ruling classes tremble at a men’s revolution. Ordinary men have nothing to lose but their chains. Working men of the world, unite!

Little is know about the older Boucicaut. Jehan Le Fèvre, who was well practiced in currying favor, denounced Boucicaut for unscrupulously seeking profit at the royal court. Id., referring to Le Fèvre’s Le Songe du vergier. Geoffrey de la Tour Landry referred to the older Boucicaut as “a wise man and well thought of by the other knights.” Geoffrey also referred to “Charny and Boucicaut … such venerated and renowned knights.” Geoffrey, Knight of the Tower, Ch. 22 (Of three ladies who rebuked Boucicaut) & Ch. 114 (How every good woman ought to guard her reputation well), from French trans. Barnhouse (2006) pp. 140, 216.

Here’s some biographies of medieval soldiers.

[2] Geoffrey, Book of the Knight of the Landry Tower {Livre du chevalier de la Tour-Landry}, Ch. 22 (Of three ladies who rebuked Boucicaut), from French trans. Barnhouse (2006) p. 140. All the subsequent quotes except for the final one are from id. Here’s a French text of the Knight of the Tower.

Other knights in Boucicaut’s time also showed self-confidence and guile in dealing with ladies. Geoffrey wrote:

I remembered the things the soldiers said about their encounters with ladies and damsels, whose love they asked for. If one lady wouldn’t listen to their prayers, another soldier would ask for her love without even waiting. And the men didn’t care what answer the ladies gave them, because they had neither fear nor shame, being so hardened and accustomed to acting this way.

[3] Boucicaut excuse for not sitting at the ladies’ feet was, “I might break my points and laces.” Barnhouse explains:

He’s referring to the laces that attach his hose to his doublet; should they break, his hose would fall, exposing his legs. You can imagine the embarrassment for Boucicaut, and the delight of the three ladies, should that happen.

Id. p. 141. That’s a superficial reading of the situation. Boucicaut actually may have been seductively reminding the ladies of their desire for him and asserting his unwillingness to be abjectly subservient to their desire.

[5] Froissart’s Chronicles (written about 1380), provides an account of the tournament at Saint Inglevert. Steve Muhlberger has provided a tally of the combat from which the above account draws. Muhlberger has also made available an English translation of relevant sections of Le livre des fais du bon messire Jehan le Maingre, dit Bouciquaut.

[image] Battle between Portuguese and English army and a French vanguard of the King of Castile. Manuscript of Recueil des croniques d’Engleterre by Jean of Wavrin. France, c. 1470-80. Manuscript Royal 14 E IV f. 201v . Thanks to British Library.

Curry, Anne, Guilhem Pépin, and Craig Taylor.  2015. “The French Army at the Battle and Its Commanders.” Ch. 11 (pp. 158-77) in Curry, Anne, and Malcolm Mercer, eds. 2015. The Battle of Agincourt. New Haven: Yale University Press, in association with Royal Armouries.

Huizinga, Johan, trans. by Frederik Jan Hopman. 1937. The waning of the middle ages: study of the forms of life, thought and art in France and the Netherlands in the xivth and xvth centuries. London: E. Arnold & Co.