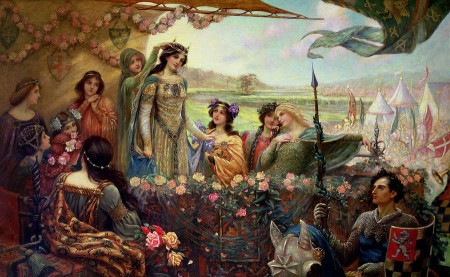 Before the story of the lady-server Ulrich von Liechtenstein, medieval literature knew of the manlet Lancelot. The original ideal of the chivalric knight was a husband whose preeminent duty was to service his wife sexually. Subtly re-figuring the prowess and effectiveness of a man’s natural lance, the brilliant medieval French poet Chrétien de Troyes about the year 1180 wrote the romance Lancelot, the Knight of the Cart. Chrétien’s Lancelot, which presents the lady-courting knight Lancelot in a position of criminal abjection, is similar to the prophetic Book of Jonah in the bible. Lancelot became the ideal of the courtly lover. This new ideal courtly lover is a sex-deprived man who uses unnatural lances and swords to fight other men in accordance with women’s whims and orders.

Lancelot suffered from what modern love scholarship calls one-itis for Queen Guinevere. A young single woman, strong and independent, admirably invited Lancelot to sleep with her. He accepted that invitation, and then refused to touch her in bed. Instead he preferred masochistic devotion to Queen Guinevere. The queen was cuckolding her husband King Arthur. Lancelot loved the pain of loving Guinevere. Given her infidelity, he probably would have loved even more being married to her:

Love kept scratching open
The wounds he’d suffered for Love.
He’d never bothered to bandage them
Over, or tried to heal them:
From the moment he’d felt the blow
And known he was hurt, he’d never
Longed for relief or sought
To be cured but, grateful, hungered
For his pain. [1]

Soldiering for love is a masochist’s mission. Men must understood deep within their bones that they are entitled to love.

Developing men’s sense of entitlement to love requires rejecting one-itis, appreciating the vast multitude of women in the world, and learning seductive arts from Ovid and subsequent learned teachers of love. Journeying through the woods in search of Guinevere, Lancelot spotted a comb on a stone. He marveled at the comb. But he acted only when the lusty girl he hadn’t touched said to him: “Fetch it for me.” Lancelot, subordinate even in a sexless relation to a girl, responded “Gladly.” Then, like a loyal retriever dog, he fetched the comb for the girl. Men with a full sense of entitlement to love are capable of acting without satisfying females’ orders.

Fully developed men don’t obsess about a particular woman. Lancelot stared at the strands of hair in the comb. The girl began to laugh. A guileless chump, Lancelot asked the girl why she was laughing. She said she didn’t feel like telling him why she was laughing. He then begged her to tell. She finally relented and explained that the comb belonged to Queen Guinevere. Lancelot nearly fell off his horse. His weakness frightened the girl:

The girl slipped
From her horse and ran to his side
As fast as she could, to hold
Him up and keep him from falling

With respect to women, Lancelot obviously was a poor rider.

To avoid embarrassing Lancelot, the girl explained that she had come to him to ask for the comb. Lancelot was the sort of man who would do anything for a woman, other than have sex with her. So when the girl asked for the comb, he gave her the comb. But first he removed from the comb Queen Guinevere’s hair:

He gently removed the queen’s
Hair, not breaking a single
Strand. Once a man
Has fallen in love with a woman
No one in all the world
Can lavish such wild adoration
Even on the objects she owns,
Touching them a hundred thousand
Times, caressing with his eyes,
His lips, his forehead, his face,
And all of it brings him happiness,
Fills him with the richest delight;
He presses it into his breast,
Slips it between his shirt
And his heart — worth more than a wagon-
Load of emeralds or diamonds,
Holy relics that free him
Of disease and infection: no powdered
Pearls and ground-up horn
And snail shells for him!
…
If I told you the truth — if they offered him
Everything displayed at the Fair
of Saint-Denis he wouldn’t
Have exchanged the hairs he’d found
For the whole bursting lot of it.

After beheading a man at a girl’s request, Lancelot fought to rescue Queen Guinevere. A large crowd gathered to enjoy watching the violence against men. Guinevere herself begged to be allowed to watch the fight. She wasn’t denied the privilege that other women had. The fight between Lancelot and Méléagant proceeded with brutality toward men that is terribly conventional:

And then the combatants, freed
For their fight, ordered the crowd
To withdraw, set their shields
In place, their arms through the straps,
And, aiming their spears, dashed
At each other, striking so fiercely
That the points went two arms deep,
And the shields split and shattered
To bits. Their horses, too,
Came smashing breastplate into
Breastplate, with incredible force,
And the crashing shock of shields
And helmets, horses and men,
Sounded for all the world
Like a towering clap of thunder
And every strap and belt
And spur and rein and girth
Broke, and even the heavy
Saddles snapped at the bow,
And neither knight was shamed
Or surprised to be tossed to the ground,
As everything underneath him
Gave way. They leaped to their feet
And continued the combat like a pair
Of wild boars, not bothering with insults
Or boasts, but striking each other
With heavy blows of their steel
Swords, like men who violently
Hate one another. Their slashing
Strokes often cut
Through helmets and mail shirts, making
Blood spurt from the metal.

Lancelot seemed to be weakening. Méléagant seemed likely to kill him. Then a girl called out:

Despite being in brutal, man-to-man combat, Lancelot turned his head, looked up, and saw Guinevere. Keeping his eyes on her, Lancelot then foolishly fought without looking at his foe. Méléagant closed in for the kill. But a girl called out:

Ah, Lancelot! Can you really
Be as stupid as you look?
…
We see you fighting backwards,
Looking away from your enemy!
Do your fighting with yourself
Turned to this tower, so you’ll see her
Better! Let her shine on you! [2]

Lancelot understood the girl’s tactical suggestion. He dove behind Méléagant and turned him around. Then fighting with his body facing Méléagant and his eyes on Guinevere, Lancelot greatly strengthened. He began to batter Méléagant. That’s the socially constructed Popeye fantasy of girl-inspired preternatural strength for men’s violence against men. It helps to explain why men die from violence at a rate four times higher than that for women.

Dear sir, if you want the battle
Stopped, I want that, too.

As soon as he heard his ruler’s words, Lancelot stopped fighting. Méléagant, a rebel against gynocentrism, ignored Guinevere and struck Lancelot a heavy blow. Because Guinevere gave him no further orders, Lancelot did nothing. But the king ran out and berated his son for violating the gynocentric order that Lancelot upheld. When his son refused to accede to that order, the king had his men drag his son from the field.[3] Lancelot thus won freedom for Guinevere. The injuries to Lancelot in serving Guinevere, like injuries to men generally, were of little concern.

The benighted Lancelot received the reward common to men who abjectly serve women. The king and Lancelot went to see the newly freed Guinevere. She greeted the king and ignored Lancelot. The king, astonished, reminded Guinevere that Lancelot had fought for her sake, risking his life to rescue her. Guinevere responded:

My lord, truly, he’s wasted
His time. I can’t help it:
I take no pleasure in his sight.

Lancelot responded only “as a true {courtly} lover should”:

You leave me sorrowful, lady,
But I dare not ask you why.

Guinevere then silently walked away. Lancelot, his body bleeding from the brutal hardships and risks he suffered to rescue Guinevere, wanted to know why she wouldn’t talk to him. But he didn’t dare ask her. For a fully developed man, such a question isn’t even worth asking. Lancelot lacked appreciation for the value of his natural lance. Woman loath men who value themselves at nothing among women. Women loath manlets.

Guinevere later explained her vicious treatment of Lancelot. She explained that he had hesitated briefly before getting into a cart to be brought closer to her. Carts were used to shame criminals. By riding in the cart, the knight Lancelot accepted the shameful position of a criminal. Many men in colleges and universities today have similarly accepted the shameful position of being depicted as rapists merely for being men. In a paradigmatic groveling response to Guinevere’s rationalization for her appalling behavior, Lancelot declared:

In the name of God, Lady,
Tell me what I must do
To earn your forgiveness, and whatever
It is I will do at once.
I beg you: pardon my fault.

In late-nineteenth-century medieval scholarship, the relationship of Guinevere and Lancelot stimulated scholarly study and glorification of courtly love (amour courtois). Chrétien de Troyes shouldn’t be blamed for that horrific scholarly development any more than the author of the Book of Jonah should be credited with establishing Jonah as a revered prophet.[4] The original understanding of chivalry urged men to prioritize having sex with their wives over committing violence against men. Through the invisible interpretive hand of gynocentrism, medieval stories of knights, ladies, and love generated the opposite priorities. Men and women of good will must self-consciously recollect and retell stories valuing men’s sexuality and devaluing violence against men.

Lancelot in the English translation of Comfort (1914) is available online. The Old French text of Lancelot is readily available online in the Figura TG (Episodes section) presentation of the Princeton Charrette Project. Here’s useful background information on the text and episode summaries.

[2] In the Byzantine epic Digenis Akritis, Digenis is similarly inspired to fight by the sight of his beloved. During Digenis’s intense fight with Kinnamos and Ioannakis:

the girl {Digenis’s wife} came up — though she kept her distance —
and deliberately stood in front, to be seen by me.
And when she saw the two of them circling me like dogs,
she darted a supportive word to me, saying
‘Be brave, my dearest.’ And at her word immediately
I regained strength…

[3] Lancelot’s hands and feet were severely cut and bleeding from recklessly crawling over the Sword Bridge to get to Guinevere. Nonetheless, Lancelot sought immediately to fight the knight Méléagant for Guinevere. In subsequent combat, Lancelot beheaded Méléagant. Earlier, Lancelot had killed many men of Gorre in a battle with the men of Logres. In medieval Europe, men suffered from an even larger gender inequality in lifespans than men do today.

Lance meant the same thing in Old French that it does in Modern French. The suffix – lot appears to be either a combination of the Latin diminutive -ellum and the OF diminutive -et (-ete), or simply the OF suffix -et preceded by a parasitic l to facilitate the junction after an open syllable. In any case it is a diminutive suffix more or less intense. What is surprising however is that a lance normally does not take a diminutive suffix because it is precisely its size, or length, which makes a weapon a lance. … Finally, in view of the missing-horse symbolism which was discussed above as well as the ubiquitous motif of an ineffectual Lancelot, it is far from gratuitous to point out that a lance is not an uncommon sexual symbol. What is thus implied by the diminutive is obvious.