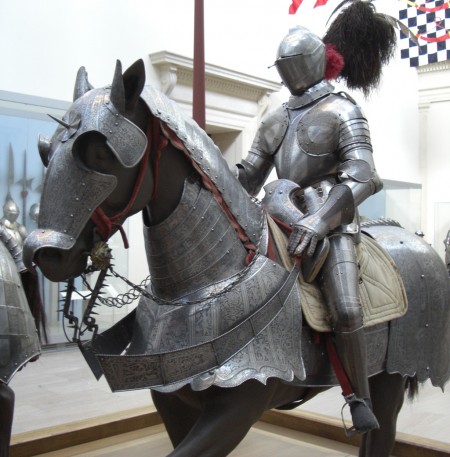 Chivalry today tends to be associated with men giving up their lives to save women.  Or men cowering in the back of an elevator, like blacks segregated in the back of buses in the American Old South, waiting for women to get out first.  These ideas of chivalry are thought to have developed and spread from the twelfth century in medieval European romances.  In fact, the original idea of chivalry has an older, more romantic history.

In the late-eighth-century Arabic text Bilauhar and Budasaf, the chivalric hero was a fearless, unfailing, indivertible lover.  He was a warrior with a wife of superior beauty.  He was also a jealous man.  He feared that another was seeking to seduce his wife because of her beauty and youthfulness.  The warrior said to his wife:

I have a jealous enemy, who will attack you and will use all his efforts to prevent me from enjoying the blessing that God has given me in your person, and he will seek to seduce you.  Be then on guard.  If ever wells up in your heart desire for some man, do not fail to let your hair fall down on your ears, so that I know.  If then I don’t come to satisfy your need welling up in your heart, you have permission to obey Satan. [1]

One day an enemy attacked their village.  The husband-warrior donned his armor and went out to join the other warriors fighting the enemy.  But the husband-warrior’s wife caused him to turn back:

she felt in herself the moving of sexual desire, and she let her hair fall down on her ears.  Seeing this, he turned back to her, although his warrior-companions were calling and urging him, and made love to her.  Then he left to join them.

They said to him, “Have you turned back in the face of the enemy?” He replied, “I was fighting an enemy within, who is for me the enemy closest to my house and the most difficult to vanquish. I have thus preferred to start the fighting with him!” [3]

The enemy within was the wife’s unsatisfied sexual desire.  The hero-husband vanquished the enemy by having sex with his wife.  Being always ready and willing to have sex with one’s wife was the understanding of chivalry before the spinning of medieval European romances.[4]

This humane understanding of chivalry was sliced out of the main stream of European medieval history.  About the ninth century, the Arabic Bilauhar and Budasaf was translated in Georgian.  The Georgian version retained the tale of the chivalric warrior, commonly called the tale of the amorous wife.  A late-tenth-century Greek translation from the Georgian version eliminated the tale of the chivalric warrior.  That Greek text generated versions of Barlaam and Josaphat in most western Eurasian languages.[5]  Most European readers of Barlaam and Josaphat thus missed Bilauhar and Budasaf’s humane understanding of chivalry.

A few centuries after this humane understanding of chivalry was killed, a death-embracing, man-degrading idea of chivalry arose in western Europe.  Buddha wept.  Saint Josaphat flagellated himself.  European civilization must embrace enlightenment.

[1] Bilauhar and Budasaf, trans. from Arabic into French, Gimaret (1971) p. 197, my translation into English. A woman letting down her hair was an ancient Greek gesture of lament:

women conventionally let down their hair while lamenting. This spontaneous but traditional gesture is an express of loss of control and order in one’s personal life.

[2] After the couple established the signal, the tale states:

Well, the man {warrior-husband} was young and beautiful, and full of confidence in himself.  So she {his wife} was made for a time not interested in any other man but her husband.

Bilauhar and Budasaf, trans. from Arabic into French, Gimaret (1971) p. 197, my translation into English.  This line points in a narrative direction of the husband becoming older and less beautiful, and then the wife finding another young, beautiful man stimulating her sexual desire.  Enemy warriors who came to their village could be such men.  The Arabic text may have modified the story to protect the wife from a depiction of her extramarital sexual interest.  That of course is a preliminary step towards the later medieval and modern idea of chivalry, and the associated increase in the population of manboobs.

[3] Id. (previous three quotes above). The Trojan King Priam suspected that the renowned warrior Achilles, once married to his daughter Polyxena, would be preoccupied with the tradition concern of chivalry:

Let us assume, however, that he {Achilles} will love Polyxena and think the world of her. He will sit at home all day with his new bride, not wanting to know if there is a war stirring. When desire concentrates the whole mind upon itself, care for other concerns is set at rest. What then shall we do, Trojans, when the Achaeans attack? We shall say, presumably, “He was married only the other day, we can forgive him for staying with his wife.” The only alternative will be to shout for him and go to hammer on the door of his house.

[4] The original understanding of chivalry endured primarily in the metaphor of sexual intercourse as horse-riding. For example, an Old French lyric recorded early in the thirteenth century sings:

Renaut and his love are riding in a meadow,
he rides all night until the bright day.

[5] Bilauhar and Budasaf mainly describes the life of Buddha.  Lang (1966) is an English translation of the early Georgian text.  For the text of the chivalric warrior, see id. pp. 142-3.  The Georgian text refers to the warrior-husband as a knight.  Woodward, Ratcliffe & Mattingly (1914) is an English translation of the early Greek version.  In the adaptation Barlaam and Josaphat, Buddha became Josaphat.  From early medieval times, Christians recognized Josaphat as a Christian saint.

Some tales from Barlaam and Josaphat were well-known in medieval Europe. For example, Chapter 12 of Barlaam and Josaphat includes a tale of a man fleeing a unicorn and falling into a pit. The man foolishly ignored his perilous circumstances and focused on the sweetness of drops of honey. That tale exists as Tale 148 in Gesta Romanorum. Swan & Hooper (1876) pp. 319-20. Gesta Romanorum was broadly disseminated in fourteenth-century Europe.

One thought on “chivalry distorted through medieval European romances”