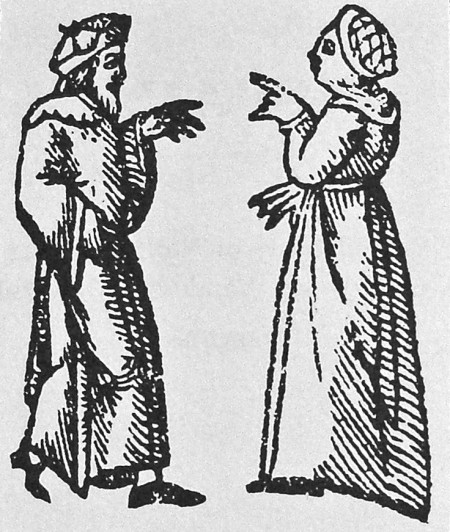 The noble Spanish knight Suero de Quinones fell deeply in love with a lady.  He vainly sought her affections.  Declaring himself imprisoned with love for her, every Thursday he wore an iron collar around his neck.  To impress her, he fought with his right arm bared against the Moors in Grenada.[1]  The lady nonetheless did not requite his love.

Ignorant of classical Ovidian learning, Suero de Quinones in 1434 occupied a bridge with the help of nine of his fellow knights.  They demanded a fight from any man who sought to cross the bridge:

Knights were to be clad in the armor of war, and were to joust without shields.  Armor, lances, and horses would be provided for all, although if a knight chose to wear his own armor he might do so.  Suero and his companions were to have no advantage in the matter of arms.  Two knights would joust until three lances were broken between them.  A lance which struck down a knight or drew blood was to be counted as broken.  Any noble woman who passed within a half-league of the Passo {bridge} would be obliged to give up the glove of her right hand unless she was attended by a knight who would joust on her behalf. [2]

One woman’s glove was thus made equivalent to grave risk to a man’s life.  Suero and companions pledged to occupy the bridge until they had broken three hundred lances, or for thirty days.  Knights from across Spain and beyond Spain came to take up Suero’s challenge.  After thirty days, sixty-eight knights had jousted with Suero and his companions.  Many knights were wounded.  One knight was killed.  Suero and eight of his companions were so badly injured at the end of the thirty days that they were physically incapable of jousting.  The absurd event concluded with a solemn ceremony indicating the point of the carnage: the iron collar symbolizing his love bondage was removed from the neck of the physically wounded Suero de Quinones.  Many years later, Suero de Quinones was killed in a joust.[3]

The extent to which men’s lives are devalued is greatly under-appreciated.  True understanding of chivalry was historically suppressed more than a millennium ago, resulting in continuing harm to men.  Medieval French fabliaux relished violence against men and demeaned men’s persons to penises.  Early in the seventeenth century, Don Quixote of La Mancha cited with admiration Suero de Quinones.  Quixote declared himself to be a direct male descendant of the man who killed Suero.[4]  Subsequent history of chivalry makes clear that Quixote’s literary-symbolic genealogy was completely fanciful.

The best modern scholarship among the rare work showing concern about men has identified the disease of one-itis.  Professor Flame insightfully explains:

When it comes to a relationship, it is possible to have a healthy, passionate and loving relationship WITHOUT getting one-itis for the chick.  One-itis basically means the guy is placing the girl way above himself, places her on a pedestal (and thus above her true worth in his life). You don’t have to do this to have a loving relationship with your gf {girlfriend}.  In fact, I think it’s even more rewarding when you understand and accept that your gf is as human as you are.  This allows you to appreciate her in her real form, as a person who is as flawed as you are, but who ignites something within you.

Perfection is not a requirement for love. Part of romance and love and building real relationships is discovering the flaws in your partner and embracing those flaws as part of this whole, real person that you are sharing something very intimate and beautiful with.  There’s something very sacred about seeing a person truly as he/she is and still realizing how important she is in your life.

Professor Heartiste recommends having sex with ten other women hotter than the woman whom you feel is holding you in the love bondage of one-itis.  With admirable ethics, Prof. Heartiste describes a possible side-effect of such treatment for one-itis: “ten-itis, which is a perpetual ringing in the ear caused by all the sex screams of your exes.”  The value to men of such expert opinion is obvious.  Yet many men do not seek the best available scholarship on men because they are afraid that women might punish them for learning such thinking.

In 1438, only four years after Suero de Quinones and his companions quixotically occupied the bridge, the Archpriest of Talavera recognized the social problem of chivalry and the difficulty of addressing gender equality.  The Archpriest of Talavera sought to reduce men’s relational subordination to women and promote gender equality.  He wrote a book that challenged women’s rule.  In an epilogue to that book, he explained that he considered throwing the book into flames hot as lust.  He later fell asleep and dreamed of more than a thousand ladies — elegant, famous, well-bred, and very pretty.  He was then an old man.  The ladies gang-raped him.  One said to him:

Crazy fool!  How could you dare write or speak of women who deserve to rule the world?  Remember, remember, how much fun you had with us in the past.  Well, don’t say now: “I’ll never partake of that cup,” since in old age the crafty devil is accustomed to enter into the old head of the lowly and clumsy ass.

The ladies thus suggested that he actually wanted it.  A scholar who has examined the gang-rape in detail concluded that it’s “truly comical.”[6]  But the Archpriest of Talavera made clear his pain:

It seemed to me that I was more dead than alive and that I’d rather be dead than experience such pain.  Anguishing in pain, sweating, I awoke and thought I had been in the power of cruel ladies.

The cruel ladies left the Archpriest of Talavera with a stark choice:

Either I must have peace and ultimate pardon, good will and affection from those ladies under whose mantle I have lived and must burn the book which I have completed . Or else, with repentance asking pardon from them, may the book continue to exist and so long as I live may I be despised by so many lovely ladies or whatever other cruel punishment there might result.

The epilogue demands to be read ironically.  The Archpriest of Talavera did not burn his book.  He would not be intimidated by being “despised by so many lovely ladies.”  He would not create or impose upon himself “other cruel punishment.”  While as a young man he had fun “under the mantle” of ladies, as he grew in wisdom he recognized true love of God to be far more important than carnal love.  He probably saw for himself the trials of Suero de Quinones and his companions at the bridge.  Suero de Quinones foolishly slept alone with an aching head, lamenting that his lady would not enter his house. Suero de Quinones’ affliction was the worst misfortune.[9]  Despite the Archpriest of Talavera’s book, men continue to suffer that misfortune.  Chivalry deludes men and keeps them in ignorance in the continuing Dark Ages.

[3] Id. pp. 146, 143, ft. 8.  Four knights came to participate from beyond the borders of Spain.  At the request of Suero de Quinones, a town notary Don Luis Alonso Luengo kept a detailed account of the events, which were known as the Passo Honroso.  That account was subsequently published by Pero Rodriquez de Lena as El Passo Honroso de Suero de Quinones.  Selected passages are available both in medieval Spanish and in modern English translation in Fallows (2010). The knight Gutierre Quijada killed Suero de Quinones in a joust on July 11, 1456, near Barcial de la Loma. Gutierre Quijada had participated in the Passo Honroso.

[6] Costa Fontes (2000), p. 48, describes the ladies’ attack as amounting to “nothing less than rape.”  Id., p. 49, describes that attack as “truly comical,” and the whole epilogue, “unquestionably hilarious.”  Costa Fontes also misandristically labels the Archpriest of Talavera “a misogynistic work.” Id. p. 36.  More important than name-calling is the current social reality of hate rape and imprisonment.

The modern reader of the Archpriest of Talavera might well react as did a former student of one of the translators of this work by walking out of the classroom declaring that she was going to burn the book on the lawn of the university and by condemning the professor for promoting a work of such appallingly politically incorrect views of women.  She had some reason to react in this way given the hypersensitivity not only of women, but of men and society in general to the tenets of the feminist movement — the twentieth century’s extended version of a medieval palinode, which ultimately condemns centuries of “anti-feminist” behavior toward women.

Id., translators’ introduction, p. 19.  The brutalized lives of the subordinated men at the Passo Honroso attracts concern only from true humanitarians like the Archpriest of Talavera. A scholar who insightfully reviewed literature addressing the literature of men’s sexed protests observed:

The term “antifeminist” has been applied widely and indiscriminately to any story in which, even superficially, it appears that a woman is being criticized.

Goldberg (1983) p. 67.  Goldberg made that observation prior to the burgeoning of deeply misandristic literary studies and concerted efforts to popularize misandry.  Through the development of more powerful institutions of moral discipline and punishment since the Middle Ages, anti-feminist behavior has become more suppressed.

Naylor, Eric W. and Jerry Rank. 2013. The Archpriest of Talavera by Alonso Martínez de Toledo: dealing with the vices of wicked women and the complexions of men. Tempe: Arizona Center for Medieval and Renaissance Studies.