Lovesickness, like eros, has long been a motif in human communication.  An Egyptian poem written about 3200 years ago states:

Seven days from yesterday I have not seen my beloved,
And sickness has crept over me,
And I have become heavy in my limbs,
And am unmindful of my own body.
If the master-physicians come to me,
My heart has no comfort from their remedies,
And the magicians, no help are they,
My malady is not diagnosed.[1]

The Greek poet Sappho, writing about 2600 years ago, poetically detailed with detached first-person statements her physical responses to seeing a beloved with another.  Those responses take the lover not far from death.[2] 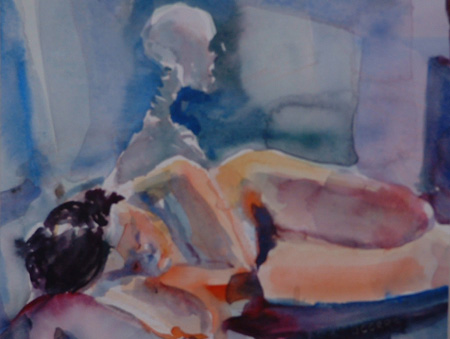 A Greek-Arabic text from earlier than 1100 years ago describes lovesickness onto death.  This text explains lovesickness using universalized observations and the highly respected Hippocratic-Galenic humoral system of biological reasoning.[3]  It seems to be popular science like that in the Alexandrian pseudo-Aristotelian Problemata Physica from about the fifth century.[4]  Yet at least in one place it is also quite poetic and makes highly unnatural claims:

The final stage {of lovesickness} is madness, in which case the lover sometimes kills himself or dies of grief; sometimes he may come into contact with his beloved and then dies either of joy or of sorrow, sometimes he heaves a sigh and loses consciousness for twenty-four hours, so that he is believed dead and is buried alive; at times he sighs very deeply and his breath is caught in his pericardium, where the heart closes in on it, so that it cannot escape until he dies; sometimes during moments of relaxation he raises his eyes to look around, and he suddenly sees his beloved — then his soul departs in one stroke.[5]

Breathing typically indicates a living animal body.  In pre-Aristotelian Greek and Hebrew language and thought, the soul similarly animates the body.  In the above text, breath and the soul, moving outward and inward, double in an explanation of lovesickness onto death.  That death is for a day or forever, poetically suggesting a subjective erasure of time in grief and mourning.  But temporary death was not just poetry.  It was also a concern of natural philosophy.  According to an eleventh-century Arabic source, Galen wrote a treatise entitled “On the Prohibition of Interment until Twenty-four Hours after Death.”[6] The possibility of temporary death from lovesickness may have provided additional medical justification for delaying burial.[7]

The account of the tripartite possibilities for the soul in the Greek-Arabic biological text on lovesickness has literary qualities.[8]  Popular natural philosophy in the Hellenistic world or late antiquity apparently encompassed literary interests.

Everyone knows the detriments to health and appearance that beset those who are ill and also those who are in love: an unsightly paleness, languid eyes, weak knees, restless sleep and a sighing that is more vehement because it is slowly tortured.  You would have believed that she was tossing so with the heat of fever if it were not for her crying.  Oh, the shallow intellect of physicians!  What does the beating of the pulse indicate, what does the immoderate heat mean, why the weary panting and the incessant tossing and turning back and forth, from side to side? Good gods!  How easy is the diagnosis although not to the ingenious physician, nevertheless to anyone who has experienced Venus’ passion, when you see anyone burning without bodily fire.

[3] Biesterfeldt and Gutas (1984) provides a critical, synoptic edition of the text. HP pp. 58-9 provides a text of what id. calls the “Short Version.”  Here’s an example of its Hippocratic-Galenic humoral reasoning:

Love is a desire that surges in the heart and leads to the formation therein of elements of fixation.  The stronger it grows the more the person is affected by agitation, obsession, intense anxiety and frequent sleeplessness. In this condition the blood is burnt and transformed into black bile, and the yellow bile becomes inflamed and turns into black bile. By an excess of black bile the thinking faculty is disturbed, and disturbed thinking leads to dullness, weakness of reason, vain hopes, and futile yearnings.

On the Sacred Disease, from the Hippocratic Corpus c. 400 BGC, associates bile with emotionally disturbing the brain.

Muruj adh-dhahab wa ma’adin al-jawahir (Meadows of Gold and Mines of Gems) by al-Masʿūdī (d. 956) includes this text, but attributes it to Galen.  Meisami (1989) pp. 275-6 (para. 2581).  Galen seems to me a more plausible author of it than does Hippocrates.  In any case, it’s likely that the text has been translated from Greek into Arabic.

[7] Early in the first century GC, Valerius Maximus described King Seleucus I’s son Antiochus as sick to the point of being bedridden and near death.  The leading physician Erasistratus correctly diagnosed that Antiochus was lovesick with forbidden love for his stepmother.  Pinault (1992) pp. 63-7.  This story is closely related to a story of the celebrated physician Hippocrates curing King Perdiccas of lovesickness.  Galen, not shy about self-promotion, referred to this story, declared his skill in diagnosing lovesickness, and castigated other physicians for their failures.  Galen, Prognosis 6, trans. Nutton (1979).  Elsewhere Galen, adding to a Hippocratic statement on epilepsy, declared, “neither epilepsy nor love is a divine disease” (In Hippocratis prognostica commentarius, bk I, pt. 1).  For Galen, love, like epilepsy, is a serious condition worthy of an excellent physician’s attention.

In the medieval story-collection Gesta Romanorum, a clerk feels the pulse of a knight’s wife to detect her love for another man. Gesta Romanorum, Tale 40, from Latin trans. Swan & Hooper (1876) p. 75.

[8] Another biological analysis of love, also attributed to Galen, also concerns the soul:

Love is one of the activities of the soul.  The soul has its seat in the brain, in the heart, and in the liver.  There are three dwelling places in the brain: imagining in the front part, thinking in the middle, and remembering in the rear part.  A person can be said to be in love in the full sense of the term only if, should his lover leave him, his imagination, his thought, his memory, his heart, and his liver are preoccupied with the lover, so that he can neither eat nor drink because his liver is too busy, nor can he sleep because his brain is too busy imagining [him], thinking about him, and remembering him.  All the dwelling places of the soul are thus [fully] occupied with him; (when, however, at the time of separation [from his lover], the soul is not [thus] occupied, then he is not in love). When he meets him, these dwelling places are no longer preoccupied.

Amundsen, Darrel W. 1974. “Romanticizing the ancient medical profession: the characterization of the physician in the Graeco-Roman novel.”  Bulletin of the History of Medicine. 48 (3): 320-337.