Boccaccio’s Decameron is filled with stories.  The story about Ferondo, according to its narrator Lauretta, is “a true story that looks more like a lie than was actually the case.”[1]  The Decameron’s story about Ferondo concerns truth like the story of Hippocrates raising the dead and being killed in the thirteenth-century Old French Lancelot-Grail cycle.  Fantastic romances can tell big lies and deep truth. 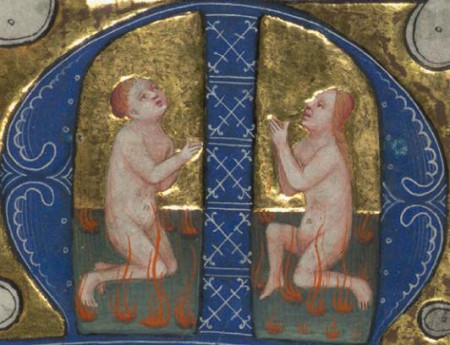 The wealthy peasant Ferondo had a very beautiful wife.  An Abbot, saintly in all ways but in his relations with women, fell in love with Ferondo’s wife.  Ferondo was simpleminded, but he watched carefully over his wife.  The Abbot despaired of the usual means of having an affair with someone else’s wife.

Fantastic lies overcame Ferondo’s careful watch on his wife. The Abbot contrived to have Ferondo’s wife ask him to hear her confession.  She confessed that her spiritual development was being hindered because her husband was utterly stupid and extremely jealous of her in relation to other men.  The Abbot sympathetically told her:

My daughter, I do think it’s a terrible affliction for a beautiful and delicate lady like you to have an idiot for a husband, but it’s even worse, in my opinion, to have one who’s jealous, and since you have both kinds in the same man, it’s not hard for me to believe what you’re saying about how much you suffer.

The Abbot proposed that Ferondo die, be sent to Purgatory to be purged of his jealousy, and then be restored to life.  In return for performing this long and complicated treatment, the Abbot asked Ferondo’s wife for sex.

With realistic-fantastic arguments, the Abbot persuaded Ferondo’s wife to accept his proposition.  The Abbot appealed to her pride:

your beauty is so ravishing, so powerful, that love forces me to act like this, and let me tell you, when you consider how pleasing your loveliness is to saints, who are used to seeing the beauties of heaven, you have more reason to be proud of it than any other woman.

The Abbot promised comfort that she deserved, but wasn’t getting:

while Ferondo’s in Purgatory, I’ll be keeping you company at night and providing you with the kind of consolation he should be giving you. [2]

She wouldn’t be punished for her transgression:

No one will ever notice what’s going on, either, because they all believe in my saintliness just as much as — in fact, more than — you did a short while ago.

She had a special, God-given opportunity to get what other women want:

Don’t reject the grace that God is bestowing upon you, for you’ve been offered something that plenty of women long for, and if you’re sensible enough to follow my advice, it’ll be yours.  Besides, I have some beautiful jewels, expensive ones, and I don’t intend to give them to anyone but you. [3]

Like many strong, independent women through the ages, Ferondo’s wife decided that she would have sex with the Abbot.  Her husband meanwhile was undergoing purification in Purgatory for his sexual jealousy.

Ferondo was fantastically conducted to an earthly Purgatory.  The Abbot had “wondrous powder” from a great Eastern prince, who had gotten it from the Old Man of the Mountain, who was the fabled leader of the Assassins, Rashid ad-Din As-sinan.[4]  The Abbot gave Ferondo a somewhat cloudy glass of wine containing that powder.  After a short time:

all of a sudden, Ferondo’s faculties were overwhelmed by such a powerful sensation of drowsiness that he dozed off while he was still standing, then fell to the ground, fast asleep.

The monks of the abbey, believing that perhaps Ferondo had collapsed from “some expulsion of gas out of his stomach,” unsuccessfully attempted to revive him.  Ferondo’s wife and family came and mourned his death.  Ferondo was then placed in a tomb.  That night, with the assistance of a trusted monk from another town, the Abbot removed Ferondo from the tomb and placed him in a “lightless underground vault” built as a prison for punishing monks.[5]  Ferondo awoke in that Purgatory.

In Purgatory, Ferondo was beaten, mocked, and purged of his jealousy.  The Abbot’s trusted foreign monk entered the prison with a roar and thoroughly beat Ferondo with a bundle of sticks.  Ferondo, wailing, asked where he was.  The monk told him Purgatory.  Then Ferondo asked if he’s dead.  The monk affirmed that he’s dead.  Then the monk gave Fernando some food that he said Ferondo’s wife brought to the church to have Masses said for his soul.  Ferorndo complained that his wife didn’t give the church the good wine “from the cask that’s near the wall.”  The monk then thoroughly beat Ferondo again.  The monk explained to Ferondo:

If you should ever happen to return {to life}, make sure you remember what I’m doing to you now, and don’t you ever be jealous again. …

I’m dead too.  I used to live in Sardinia, and because I praised one of my masters to the skies for his jealousy, I’ve been condemned by God to be punished by giving you food and drink and these beatings until He decides otherwise about you and me.

In Shakespeare’s Twelfth Night, Malvolio was tricked with fantastic lies and then held in “hideous darkness,” where the clown, pretending to be a curate, verbally abused him.  The treatment of Ferondo is like that of Malvolio.  A courtier in Twelfth Night remarks of what happens to Malvolio, “If this were play’d upon a stage now, I could condemn it as an improbable fiction.”[6]  The same is true for the story of Ferondo in the Decameron.

Ferondo returned to the world farcically.  After ten months of the Abbot and Ferondo’s wife enjoying intimate pleasure, she got pregnant.  They decided to bring Ferondo back to life to be given responsibility for that pregnancy.  With his voice disguised as a voice similar to that of the archangel Gabriel addressing Zacharias, the Abbot declared to Ferondo :

Be of good cheer, Ferondo, for it is God’s pleasure that you should go back to earth, where, after your return, your wife will present you with a son.  And you shall name him Benedetto, for God is bestowing this grace on you in answer to the prayers of your reverend Abbot and your wife, and out of His love for San Benedetto. [7]

The Abbot again put sleeping powder into wine he gave Ferondo.  Once he had fallen asleep, Ferondo was placed back into the sarcophagus in his tomb.  When he awoke, Ferondo began shouting and pushing his way out of the tomb.  The monks of the abbey were frightened to see Ferondo emerging from the tomb.  They raced off to the Abbot to tell of what they saw.  The Abbot, speaking in the form of Jesus, prophetically declared:

Be not afraid, my sons.  Take up the cross and the holy water and follow me.  Let’s go and see what God Almighty wants to show us. [8]

They saw Ferondo risen from the tomb and alive in the flesh.  Ferondo profusely thanked the Abbot for his prayers for him.  The Abbot told Ferondo:

you should go and comfort your wife, who has done nothing but weep since you departed this life.  And from now on may you live to serve God and preserve His friendship from this day forth.

Ferondo responded as the simpleton he was:

As soon as I find her, I’m going to give her a great big kiss.  I love her so much.

After he had returned to his village, Ferondo was celebrated as a sage with knowledge of Purgatory.  He told of what revelations he had received there from the ArkRanger Bagriel.[9]  Precisely nine months after Ferondo rose from the tomb, his wife gave birth to a son.  She led Ferondo to believe the son was his own.  Moreover, as a result of his experience in Purgatory, Ferondo ceased being jealous of his wife.[10]

she lived with Ferondo no less chastely than she had in the past, except that, whenever she could do so conveniently, she was always happy to spend time with the Abbot who had attended to her greatest needs with such skill and diligence.

The Decameron’s Queen for the day, Neifile, exclaimed upon hearing the story of Ferondo:

How is anyone to tell a story as beautiful as the one we have just heard from Lauretta?

The beauty of the story of Ferondo is in the fantastic lies with which Ferondo was cuckolded.  One can only marvel at the beauty of similar lies in determining paternity today.

Social will can imagine truth and beauty to be strangers.  Big lies can be successful when small lies won’t work.  That’s the deep truth in the true story of Ferondo.

[2] While Ferondo’s wife had a son, the story suggests that Ferondo wasn’t making full payment on his marital debt to his wife.  In Purgatory, Ferondo told his monk-tormentor:

I really loved her {his wife} a whole bunch before I died.  Why, I used to hold her in my arms all night long and never stop kissing her, and when I felt the urge, I’d occasionally do something else as well.

[3] The story underscores elsewhere the cupidity of Ferondo’s wife.  After she accepted the Abbot’s confessional proposition, the Abbot:

slipped a very beautiful ring into her hand on the sly and sent her away.  Delighted by the gift, and looking forward to receiving others, the lady returned to her companions {and spoke highly of the Abbot}

At her home wearing black mourning dress after Ferondo’s apparent death, the Abbot visited her and reminded her of her promise:

Realizing that she was now free, unhindered by Ferondo or anyone else, and spotting another fine ring on the Abbot’s finger, the lady told him that she was ready to do it and arranged for him to pay her a visit that evening.

[4] For a sleeping potion (opiate) described realistically in a medical-technical context, see Decameron 4.10.

[8] “Do not be afraid” is a common phrase in the Bible.  It typically signals a divine revelation.  In Matthew 16:24, Jesus calls to his disciples to “take up their cross and follow me.”

[10] Madonna Lisetta da Ca’ Quirino, “somewhat of an idiot … Lady Pumpkinhead / Madonna Simple,” is duped with a fantastic religious story in Decameron 4.2 (the story of Frate Alberto pretending to be the Angel Gabriel).  The parallel with the story of Ferondo breaks down with a characteristic sex difference: Frate Alberto, not Madonna Lisetta, in the end is subject to vicious physical punishment.