A story in Boccaccio’s Decameron is set in the Egyptian desert of the desert fathers.  The young hermit Rustico dwelling there unexpectedly encountered the beautiful girl Alibech.  Dioneo, the narrator of this story, foretells the story as putting the Devil back into Hell:

I want to tell you how to do it.  Perhaps you’ll even be able to save your souls once you’ve learned it. [1]

Dioneo’s story should be understood in the context of the Life of Saint Pelagia, an early Christian story of ascetic holiness.  Both Dioneo’s story and the Life of Saint Pelagia affirm the natural goodness of human sexuality.  They also recognize the human tendency toward deception and self-centeredness.  At the beginning of the Decameron, Pampinea chartered the brigata with the fullness of good life:

We should go and stay on one of our various country estates, shunning the wicked practices of others like death itself, but having as much fun as possible, feasting and making merry, without ever trespassing the sign of reason in any way. [2]

In Dioneo’s story and the Life of Saint Pelagia, the sign of reason mirrors the sign of selfless self-giving in true love.

He who moves heaven and all of its stars
Made me, for His delight,
Refined and charming, graceful, too, and fair,
To give to lofty spirits here below
A certain sign of that
Beauty abiding ever in His sight.
But mortals imperfect,
Who can’t see what I am,
Find me unpleasing, nay, treat me with scorn. [3]

In the Life of Saint Pelagia, Pelagia’s well-cultivated physical beauty served as inspiration to a higher beauty.  Pelagia was an actress, dancer, and courtesan.  In the company of young men and wearing nothing but jewelry, Pelagia paraded by Bishop Nonnus and other bishops.  Bishop Nonnus intently looked at her.  He delighted in her beauty.  Her beauty inspired him to cultivate beauty of the soul to please God the eternal lover.  His fellow bishops lacked that lofty spirit.  They scorned Pelagia’s obvious physical beauty.  They thus deceived themselves and denied natural male sexuality.[4] 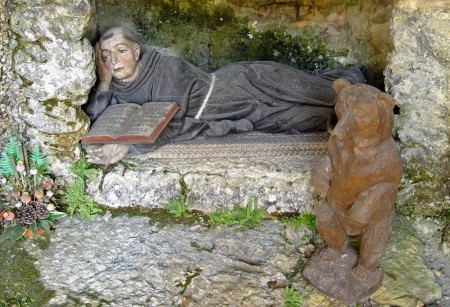 The story of Alibech and Rustico plays these keys of asceticism and beauty, self-centeredness and deception.  The story begins with unreason.  Alibech was the fourteen-year-old daughter of a very rich man in the Muslim land of Tunisia.  She was naive and not conscious of her own contradictory motivations:

She was not a Christian, but having heard how greatly the Christian faith and the service of God were praised by the numerous Christians living in the city, one day she asked one of them how God could be served best and with the least difficulty.[5]

Christians praising the Christian faith isn’t reasonably inspiring to non-Christians.  A desire to best serve God isn’t consistent with a desire to serve God with the least difficulty.  In any case, a Christian told Alibech that she could best serve God by becoming a holy recluse in the desert.  Alibech unreasonably sought to do just that:

the following morning, moved not by a reasonable desire, but rather by a childish whim, she set out secretly for the Theban desert all by herself without letting anyone know what she was doing.

Alibech set out into the desert as an unholy fool.

Rustico led himself into temptation with Alibech.  In the desert, Alibech went up to a holy man’s hut and asked him to teach her how to serve God.  The hermit, with appreciation for his natural sexual desire for a beautiful girl, told her that he could not be her teacher.  He advised her to seek someone more capable.  Another hermit similarly advised Alibech.  Then she came to Rustico.  He was willing to put himself to the test.  He took Alibech into his cell and made a bed for her from palm fronds.  His holy resolve soon dissolved.  He designed a scheme to gain consensual carnal knowledge of Alibech.

Rustico told Alibech that the most pleasing service to God is to put the Devil back into Hell.  Rustico told the girl to do whatever he did.  Then he took all his clothes off.  He knelt down and had her kneel down just in front of him:

as they knelt in this way, and Rustico felt his desire growing hotter than ever at the sight of her beauty, the resurrection of the flesh took place.  Staring at it in amazement, she said, “Rustico, what’s that thing I see sticking out in front of you, the thing I don’t have?”

Holy hermits aspired to put their flesh to death symbolically with ascetic practices.  The resurrection of the flesh — Rustico’s genital erection — was a reversal of monastic asceticism.[6]  Echoing the disparagement of men’s genitals in medieval European literature, Rustico described his penis as the Devil.  He described Alibech’s vagina as Hell.  With Alibech’s enthusiatic consent, Rustico put the Devil back into Hell.  They went on to put the Devil back into Hell seven times, a virtuous number, before they rested for awhile.  Alibech came to enjoy immensely putting the Devil back into Hell.  At her insistence, they had sex even when Rustico didn’t want to.  According to the United Nations’ judgment of criminality, Alibech raped Rustico repeatedly.  Rustico became thin and exhausted. In a symbolic transfer of Alibech’s fiery lust, her father’s house burned down, killing him and all the family except for Alibech.

The story of Alibech and Rustico represents self-centeredness and deception.  Personal whim propelled Alibech out into the desert to seek to serve the Christian understanding of God.  After she experienced sex, she insistently demanded sex with no respect for Rustico’s exhaustion.  Beneath Alibech’s expressed desire to serve God was her own self-centeredness.  Rustico, on the other hand, betrayed his ascetic commitment as a monk and intentionally deceived Alibech with his story of putting the Devil back into Hell.

Perhaps a more relevant referent for Rustico is Boccaccio’s imagination of the monk Rusticus of Toulouse. Jerome’s surviving collection of letters include a letter to Rusticus (letter 125) in 412. Jerome warned Rusticus of a woman’s ability to seduce a monk.

Alibech sounds Arabic and is thus appropriate for a girl from Tunisia.  An early fifteenth-century text from North Africa tells the story of men who were sexual heroes and who would have been Alibech’s equals.

Critics have attempted to link it to Boccaccio’s own life and to allegorize it in various ways, but with little success.

The relevant allegory seems to me to be the speaker of the song having been the bride of Christ, also understood as the Church.  In addition to the stanza quoted above, a key line:

Although I’d come to earth
For all men’s good, of one I’m now the slave.

That line makes little sense realistically and personally. It makes sense allegorically as representing the political position of the Church in Florence at a specific time.

[4] The Life of Saint Pelagia was a hagiography that probably originated in a mid-fifth-century Syro-Palestinian milieu.  It was well-known in medieval Italy; a Latin translation survives in a late-twelfth-century or early thirteenth-century Italian manuscript.  Here’s discussion of the Life of Pelagia, with citations to source texts.  Storey (1982), pp. 164-7, discusses the tale of Alibech and Rustico in relation to the literary tradition of Vite Patrum, but doesn’t mention the Life of Saint Pelagia.

[6] Illustrating perennial social repression of strong, independent male sexuality, the story of Alibech and Rustico was multilated and repressed in editions of the Decameron from the sixteenth century to the twentieth century:  “this story — when printed at all — was sometimes so radically abridged or altered as to be rendered virtually unrecognizable if not downright nonsensical.”  Kirkham (1981) pp. 79-80.  In English translations, sometimes the key passage wasn’t translated.

[7] Emphasizing the story’s context in Day 3, in the Decameron, and in all of Boccoccio’s works, Kirkham (1981) reads the story of Alibech and Rustico to instruct, “Illicit love leads to perdition.”  Id. p. 93.  Alibech is forced to return to town and marry.  Rustico, after burdensome sexual demands, is restored to his betrayed monastic solitude.  Those outcomes are less than Alibech’s and Rustico’s ill-formed desires, but not necessarily equal to perdition.  Moreover, “illicit love leads to perdition” is rather vague instruction for students.  Is sex outside of the legal institution of marriage necessarily illicit?  Boccaccio, one might reasonably suppose, pondered that question.

[image] Saint Ursicinus, a hermit living about 600 in present-day Switzerland. Thanks to Yesuitus2001 and Wikipedia.