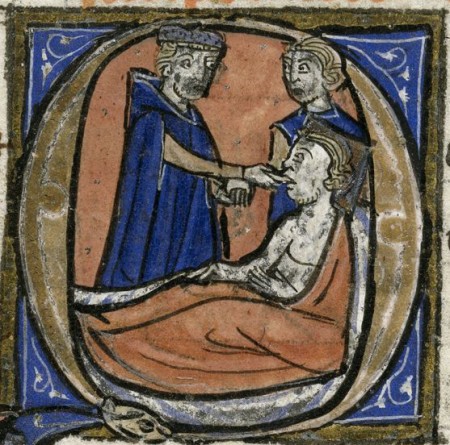 A physician reviving a dead person was credible in the ancient world.  Famous physicians, and ones seeking fame, were associated with claims of having revived the dead. The sixth-century Persian royal physician Borzuya journeyed on a highly professional trip to India to acquire medicine to revive the dead.  In eighth-century Baghdad, a story of an Indian physician reviving the dead asserted the superiority of Indian medicine over Greek medicine.  Hippocrates reputedly saved a king from lovesickness near to death.  Reviving the dead would be a plausible further feat for a physician as highly regarded as Hippocrates.

The Hippocrates inclusion in the History of the Holy Grail insists duplicitously on its truthfulness.  It describes itself as a “true story.”[1]  The inclusion declares:

Now the story says it is true — that Hippocrates was the foremost practitioner of the art of medicine, of all the men who were dominant in his time and who had worked long and diligently at this science. [2]

The distanced authority, “the story,” seems to refer to a book that the prologue declares that the narrator received from Christ himself.[3]  Around the Mediterranean world for more than two thousand years, Hippocrates has been commonly regarded as the father of professional medicine.  The inclusion further declares:

It is proven truth that in the time of the good emperor Augustus Caesar, Hippocrates came to Rome.

Hippocrates was born about 460 BGC.  Augustus reigned as Roman Emperor from 27 BGC to 14 GC.  Serious scholars in thirteenth-century France would have known that Hippocrates coming to Rome under Augustus could not be true.[4]  The question of true and false is part of the story in the History of the Holy Grail.

After hearing this, Hippocrates … headed for the {Emperor’s} palace, thinking that if he could arrive in time, before the soul had left, he had learned enough to bring him back to health through this medicine.  Upon arriving, he pushed through all the people until he came to the body.  They were all so intent on their grief that no one attempted to keep him away.  When he came to the body, he began to inspect that part where he might learn whether the child was dead.  Thus it happened that as soon as he had put his hands on the body, he knew the soul was still in it.  Then he opened the mouth and put inside it a liquor made from herbs of such great power and strength that the child immediately got up as healthy and well as ever.

Hippocrates was greatly acclaimed for this feat.  The Emperor had a golden statute made, “as tall as a man and as similar as one could make it to Hippocrates’s form.”  A similarly golden, life-like statue was made of the Emperor’s nephew.  These two statues were installed “on top of the highest tower of Rome, so that everyone who came would see them them clearly.”  The golden statues were protected from rain by a vaulted arch made of silver and gold.  Engraved underneath Hippocrates was an epigram:

This is Hippocrates, the paramount doctor of the philosophers, who through his wisdom brought from death to life the nephew of Augustus Caesar, the Emperor of Rome, the very one whose figure is besides him.

Deictics (“this is” … “the very one”) are characteristic of Hellenistic epigrams, as is play across presence and representation, reality and illusion.  The statues proclaiming that Hippocrates brought Augustus’ nephew from death to life are idols with no life in them.  For Jews and Christians, such idols indicate movement from life to death.

A physically beautiful woman declared that the statues were false, and she demonstrated that Hippocrates was foolish.  When she saw the statues and heard what they meant:

she began to smile and said that he who could make the dead man live again had not yet been born.  “I say,” she said, “that those who made these statues in memory of what you told me were foolish.  No matter how wise you may consider him, I tell you that if I could spend one day with him, I would make him seem crazy and foolish, for he certainly lies when he praises himself by saying he can make a man return from death to life, and I won’t believe him, whatever he may say.

Hippocrates fell in love with the beautiful woman.  He become lovesick near to death.  When Hippocrates told the woman of his love, she said that she would consent to his love if he visited her secretly.  The woman’s response immediately cured Hippocrates of his acute lovesickness.

The woman plotted to humiliate Hippocrates.  She told Hippocrates to visit her at night in a wooden vessel that she would pull up to her window.[5]  Unknown to Hippocrates, the vessel was actually used to display and shame prisoners sentenced to death.  When the night for their tryst came, instead of pulling Hippocrates up to her, she and her cousin stranded him in mid-air.  Hippocrates was a prisoner there all night.  He was shamefully displayed to all of Rome throughout the next day.

The woman further arranged to have the honorary golden statue of Hippocrates taken down.  Questioned by the Emperor, Hippocrates refused to explain how he got hung up in the vessel.  The woman artfully exposed Hippocrates:

secretly she had painted on a silver table two ladies pulling a man in a wooden vessel up to the top of a tower.  She had the figure made to look as much like Hippocrates as she could and the other figures made to resemble the ladies who had done this deed.  The table was beautiful and splendid, and after it had been painted just as you have heard, the lady had it placed during the night in front of the two statues that the emperor had placed on high in honor of Hippocrates.

The emperor saw the painted table and questioned Hippocrates about it.  Hippocrates acknowledged his depicted shame and dishonor.  The emperor, solicitous of Hippocrates’ status, ordered that the table be removed.  The woman objected with clever reasoning:

Certainly, my lord, it can be removed if you wish, but it is more just that it be before the gaze and view of the Romans than these other images, because what the statues bear witness to never really happened, and I know very well that Hippocrates, whom you consider to be a philosopher, cannot bring a dead man to life.  In these images that are painted on the table there is nothing but truth, for the thing is portrayed just as it happened.

Hippocrates’ humiliation did not have an enduring effect on his professional career.  Hippocrates subsequently lived in Rome “for a very long time,” greatly honored by the Emperor and the Roman people.  How much time passed since the beautiful woman stated “he who could make the dead man live again had not yet been born” isn’t made clear.  In any case, Hippocrates then heard of Jesus of Nazareth making the blind see, the deaf hear, the lame walk, and the dead come back to life.  Hippocrates decided to journey to Jerusalem to see if Jesus actually had greater medical powers than he.

While the Holy Grail tale contains nothing more about Hippocrates and Jesus, it depicts the extent and limit of Hippocrates’ power.  On his way from Rome to Jerusalem, Hippocrates met Anthony, King of Persia.  Anthony (apparently an alternate name for Artabanus III) just happened to be sailing in the Mediterranean, far from Persia, during the reign of Roman Emperor Tiberius.  The Persians had been grieving for two days for the death of the Persian king’s son.  Hippocrates went straight to the apparently dead body:

Once there, he looked it over from head to toe.  Not finding any sign of life in it, he believed the boy really was dead.  But he had a little color in his face and lips, which showed that he still had life in his body.  Hippocrates returned to one of his servants and asked for a little wool.  The latter gave it to him right away, and he took a clump and put it before the young man’s nostrils.  In this way he knew at once the truth about his state, for the boy’s breathing was so weak that it could not be seen by a man’s eyes as he inhaled and exhaled.  But Hippocrates saw the wool move slightly, and then he knew that the soul had not yet left the body and that the boy was still alive.  Then Hippocrates took a good balm that he thought would help, opened the mouth, and put it inside.  Very shortly after this, the young man let out such a loud cry that all those near him heard it. [6]

Hippocrates received great acclaim for reviving the Persian king’s apparently dead son.  Hippocrates feat enabled him to get as his wife a beautiful, twelve-year-old daughter of a king; vast riches; and a massive, luxurious house on his own island.

Hippocrates subsequently died because he did not gain love, or even just respect, from his young wife.  She sought to poison him.  She failed in one attempt because Hippocrates drank from a cup that rendered any poison harmless.  His wife then threw that cup into the sea and plotted further.  One day, Hippocrates foolishly pointed to a “wild sow in rut.”  He told his wife that anyone eating of that animal in its time of heat would die.  His wife immediately went to her cook and ordered him to kill the animal and prepare it to eat.  The wife served the sow’s head to Hippocrates.  Hippocrates naively ate what his wife served and died.

Technical knowledge, even medical knowledge to revive the apparently dead, does not enable a man to dominate a woman.  In another true story, Alexander the Great’s mistress humiliated Aristotle.  So it has been for powerful men, as well as for ordinary men, throughout history.  Within the Lancelot-Grail’s History of the Holy Grail, two messengers and a lady discussed what the story of Hippocrates revealed:

there is a devilish and very redoubtable thing in a woman, for a man’s wisdom can never protect him against her guile.

But now the story leaves off speaking about them for a while, in order to tell the true story about his house that Hippocrates had built as his manor …

[4] Surviving texts of the Hippocratic corpus are written in the earlier Ionic Greek, rather than the Koine Greek of Augustus’ time.

[5] In Aristophanes’s mockery of Socrates, to study meteorological phenomena Socrates had himself suspended above ground in a basket. Aristophanes, Clouds vv. 218-34. Covertly transporting a person between an upper window and the ground using a wooden vessel or basket became well-established in world literature.  See, e.g. Paul of Tarsus’ escape from Damascus, 2 Corinthians 11:32-33; 1001 Nights, tale of Ishaq al-Mausili, nights 279-282, trans. Lyons (2008), vol. 1, pp. 902-8; Old French fabliau Le chevalier a la corbeille / Le chevaler e la corbaylle (The knight of the basket), trans. Revard (2005) pp. 117-23 (also in MS Harley 2253, Art. 82, online); and Virgil in the basket, relevant text and images reviewed in Ziolkowski & Putnam (2008) pp. 457-8, 874-90.  The last representation is typically paired with Virgil’s revenge.  That’s the story of Virgil, acting as a magician, extinguishing all the fires in Rome and making it possible for the fires to be lit only by the vagina or anus of the woman who humiliated him.  See id.

[6] Soul and breath are connected etymologically in the Latin word “anima.”