To many traditional video programmers, new services like Hulu and YouTube are chaotic and unprofessional.  Hulu allows viewers to see what they want, when they want to see it.  YouTube allows viewers to become creators, who can project their own video in the place of highly artful work.  Services like Hulu and YouTube threaten to destroy media as we know it.

This is a sketch of Medea.  Observe how she lifts one eye in anger,
and softens the other with pity for her children.[1]

The first sentence provides objective information.  It indicates a famous, unfinished painting located in Rome about 2000 years ago. The second sentence imposes the narrative of Euripides’ play Medea to guide what the viewer sees in the painting.

The painter, Timomachus, did not depict Medea’s ultimate choice of action:

Timomachus’ art mingled Medea’s love with her jealousy
as her children are dragged to their fate.
Just then she consented to the sword but now refuses,
wishing to save her children and also to slay them.

Timomachus made the painting with great skill. It was a recognized masterpiece [2]:

Look here at a child-killer in portrait; see here a masterpiece,
Timomachus’ Medea shaped with his hand.
A sword in hand, great wrath, a wild eye are there,
and tears falling for most pitiable children.
He poured it all together, uniting into one even the unmixable,
yet spared to redden any hand with blood. 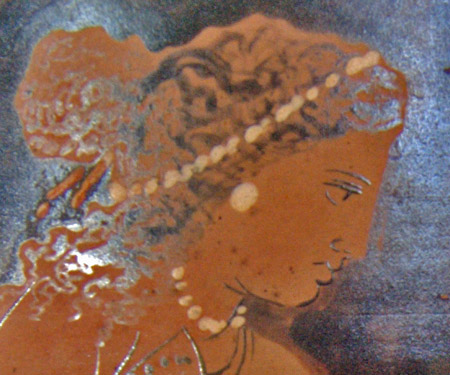 But the painting’s high artistic status did not prevent viewers from bloodily re-imagining it:

Who, lawless Media, wrote your rage into the image?
Who made you barbarian even in replica?
Always you thirst for your children’s blood. Do you claim
some other lover or winning rival as excuse?
Be gone, you who murder children, even in print. Even the stylus
perceives your jealous urge to fulfill your desires.

A twittering swallow shows a much different model of communication:

How, twittering swallow, did you dare to make as nurse
for your children the Media who takes vengeance
at the cost of her offspring? Her bloodshot eyes flash
murderous fire, and her jaws drip white foam.
Still wet with blood is her sword. Flee the destructive mother,
still murdering her children even in print.

The twittering swallow is totally misunderstood within the narrative imposed on the painting. To the twitterer, the painting simply is present as a material and institutional reality that means nothing.[3] The swallow has neither reason nor feasible opportunity to flee.

Mass media has been a bloody business from the beginning.  Perhaps a recognition and reversal will follow this:

The reason all three networks have taken a controlling interest in Hulu is because they are going to build it up and then kill it!  Brilliant!  Eat your young.  Who said there wasn’t a place for cannibalization?

[1] These and the other quoted epigrams above are translations that I have adapted mainly from Gutzwiller (2004), but also with some contribution from the translations in Gurd (2007).  The epigrams are from the Greek Anthology.

[2] Gutzwiller (2004) p. 344, notes that Julius Caesar purchased a Medea and an Ajax by Timomachus for 80 talents.  That’s a huge amount of money, roughly equivalent to $1.6 million in U.S. dollars in 2004. Both paintings were placed in the Roman temple of Venus Genetrix, which was dedicated in 46 BGC.  The painting of Medea was destroyed by fire in 80 GC.  See Gurd (2007) pp. 308-9, which incorrectly reports the price of the paintings.

[3]  The epigram imagines a swallow that has made a nest about the painting. Drawing upon Hans Ulrich Gumbrecht’s work on presence, Gurd (2007) provides an insightful analysis of the painting’s presence in the epigrams.