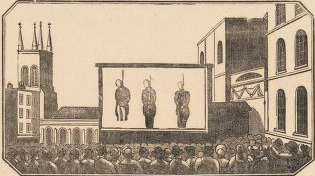 Crime and punishment has featured prominently in the rise of mass media. The first book published in Boston was A Wicked Man’s Portion (1675), a sermon that Increase Mather preached at the execution of two men for murder. About this time in England, the Ordinary (minister) of Newgate Prison began publishing accounts of prisoners who were executed. Printed execution sermons in early New England and the Ordinary’s Accounts in England became immensely popular news publications.

Broadsides — single page, highly current news reports — took news circulation to unprecedented heights. In England in 1849, the hangings of James Bloomfield Rush and of Maria and Frederick Manning each were reported in 2.5 million broadsheets rapidly distributed around the country.[1] That number amounts to about one broadsheet for every four persons ages 15 years old and older in England and Wales about that time.

In England about 1850, a news distributor, an industry veteran with more than twenty years of experience, explained how the business works:

There’s nothing beats a stunning good murder, after all. Why there was Rush [James Bloomfield Rush, executed in 1849 for two murders] — I lived on him for a month or more. When I commenced with Rush, I was 14 s. in debt for rent, and in less than fourteen days I astonished the wise men in the east by paying my landlord all I owed him. Since Dan’el Good [executed in 1842 for murdering his lover] there had been little or nothing doing in the murder line — no one could cap him — till Rush turned up a regular trump for us. Why I went down to Norwich expressly to work the execution. I worked my way down there with ‘a sorrowful lamentation’ of his own composing, which I’d got written by the blind man expressly for the occasion. On the morning of the execution we beat all the regular newspapers out of the field ; for we had the full, true, and particular account down, you see, by our own express [printing shop], and that can beat anything that ever they can publish; for we gets it printed several days afore it comes off [before the execution]; and [I] goes and stands with it right under the drop [the gallows]; and many’s the penny I’ve turned away when I’ve been asked for an account of the whole business before it happened. So you see, for herly [early] and correct hinformation [information], we can beat the Sun [a London newspaper] — aye, or the moon either, for the matter of that.[2]

Selling news to a mass market has long been a highly competitive business. Focusing on crime and punishment and having a pre-established story have been important competitive tactics. As this news distributor indicates, journalistic integrity has also been an important part of the business. The story should not be sold before the event happens.

The Newseum has recently re-opened. The news organizations that designed and funded the Newseum relocated it from Rosslyn, Virginia (about 4 miles from the U.S. Capitol) to a new, $450 million-dollar building about a half-mile from the U.S. Capitol. Being extremely close to the physical seat of the U.S. government apparently is crucial to news organizations’ representation of the history of the news.

The Newseum contains neither a gallows, gibbet, stocks, nor pillory. While the Newseum’s theater gives visitors a chance to Be a TV Reporter, it doesn’t put them in front of a bleeding body (Maddy and Tess, when you grow up may you never have to spread news by reading from a teleprompter!) The Newseum fails to report well the importance of crime and punishment in the history of the news.