Futurism was a newspaper trick that intellectual elites took seriously.  The Newseum illustrates the problem.  When the Newseum opened in 2008 its new, large building close to the U.S. Capitol, its theater room featured a Newseum introductory video.  The video had a voice-of-god narrator intoning, “War is news, peace is news, love is news, hate is news” over sensational-conventional news video.  Joe Six-Pack laughed.  Jane Taylor-Smith wept at how beautiful Jacqueline Kennedy’s dress was.  Newspaper leaders fight to gain for themselves an enduring place in the Newseum.

O maternal ditch, almost full of muddy water!  Fair factory drain!  In my mouth I savored fully your fortifying mud that recarnated for me the holy black breast of my Sudanese wet-nurse! [1]

Shock of the News, showing at the U.S. National Gallery of Art through January 27, 2013, documents more extensively the influence of Futurism.  The exhibit presents art that uses newspapers.  The exhibit’s press release explains:

Arranged chronologically, Shock of the News traces the development of the newspaper phenomenon from 1909 to 2009 and demonstrates its remarkable ability to adapt to and shift with the times while remaining vital to the present.

That description is classic newspeak.  The art spans a century (1909 to 2009) for alternate, weighty description.  The art is arranged chronologically, as if art has a date of creation like a newspaper’s date of publication.  Shock of the News presents a narrative created from cliches, conventions, and an abstraction.  It is “the newspaper phenomenon.”

Filippo Tommaso Marinetti’s Futurism Manifesto is a key work for understanding the newspaper phenomenon.  The manifesto exudes male sexuality struggling against social suppression.  A deep structure of male sexuality is devaluation of the male self and violence against other men.  The manifesto celebrates men’s youth and strength.  It endorses the self-effacement of men upon reaching the age of forty: “When we are forty let younger and stronger men than we throw us in the waste paper basket like useless manuscripts!”  The manifesto declares that “we” (“my frinds and I”, a group of men) will “glorify war — the world’s only hygiene — militarism, patriotism, the destructive gesture of freedom-bringers.”  War for millennia has been organized as men killing men.  Concern for loss of men’s lives, or men’s relatively short lifespans, doesn’t sell newspapers.  Men killing men is invisible within the newspaper phenomenon.  Newspapers write only of war.

Museums: cemeteries! …  Identical, surely, in the sinister promiscuity of so many bodies unknown to one another.  Museums: public dormitories where one lies forever beside hated or unknown beings.  Museums: absurd abattoirs of painters and sculptors ferociously slaughtering each other with color-blows and line-blows, the length of the fought-over walls!

That one should make an annual pilgrimage, just as one goes to the graveyard on All Souls’ Day — that I grant.  That once a year one should leave a floral tribute beneath the Gioconda, I grant you that….  But I don’t admit that our sorrows, our fragile courage, our morbid restlessness should be given a daily conducted tour through the museums.  Why poison ourselves?  Why rot?

Marinetti, who grew up in Egypt, made the front page {had his Futurism Manifesto printed on the front page of Le Figaro} by wooing the only daughter of a family friend, Mohammed El Rachi Pascia, a wealthy Egyptian tycoon and major stockholder in Le Figaro. To please his daughter and her suitor, El Rachi Pascia browbeat the editors into publishing the manifesto. [2]

The world fearfully awaits the nihilistic, outrageous Heartiste seducing a daughter of one of America’s reigning newspaper family dynasties. 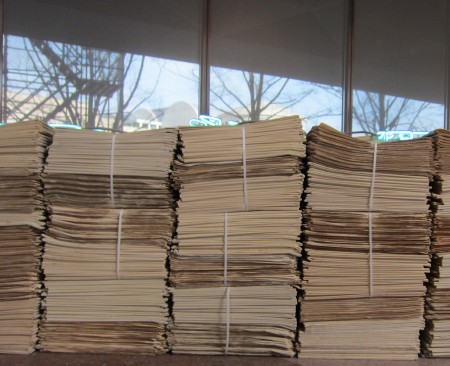 The horror of Futurism dominates the exhibit Shock of the News.  The exhibit includes guards to prevent the public from making photographs of the newspaper art.  Spread the news!  These guards are apt representations of the digital restrictions on use being built into digital news platforms.  Digital guards are cheaper than human guards.  Legal intimidation via digital notices is cheaper than physical intimidation.  Will the public in the future be as free to use the news as artists in Shock of the News were?

Grand, elegiac nostalgia for the past, that lost time back when newspapers had something to say, is a superficial reaction to this exhibit.  Urbane nostalgia for democracy, progress, the automobile, and newspapers is to be expected from the commanding heights of the old newsprint industry.  Factual journalism is less lyrical.  Shock of the News includes a photomontage published in a marginal magazine in Germany in 1930.  The photomontage shows a man with his head wrapped in a mass-market tabloid and a newspaper serving as an organ of a political party.  The photomontage is captioned (in German) “Whoever reads bourgeois newspapers goes blind and deaf.  Away with bandages that make you dimwitted!”[3]  Shock of the News displays the Guerrilla Girls canonized in the National Gallery.  The Guerrilla Girls protest the exclusion of women artists from solo shows in prestigious downtown Manhattan galleries (and not just shows during the summer!).  The Guerrilla Girls are the “conscience of the artworld.”  Welcome to the future in Europe in 1909, and the future in the U.S. in 1910.

Leave your newspaper bunker.  Drop your iPhone.  Withdraw from Facebook and Twitter.  Enjoy the creative power of male sexuality.  The blue sky is beautiful.