Pre-Islamic Arabic poets wrote a genre of poetry called tahrid.  In tahrid, a woman incites her male kinsmen to avenge the death of a fallen kinsman.  One way to incite men to violence is to assail their masculinity.  An Arabic poem attributed to a pre-Islamic woman poet urged violence in that way:

If you will not seek vengeance for your brother,
Take off your weapons
And fling them on the flinty ground.
Take up the eye pencil, don the camisole,
Dress yourself in women’s bodices!
What wretched kin you are to a kinsman oppressed!
You have been diverted from avenging your brother
By a bite of minced meat,
A lick of meager milk. [1]

Shaming men can also incite them to violence.  Another women’s tahrid from pre-Islamic poetry declared:

For if you don’t attack those tribesmen
In a morning raid that is the talk
Of all who go to water and return,
And deal the Banū ʻUqayl a blow
After which nothing of them remains,
Then be like slave girls defiled
By every hand. [2]

Sex isn’t socially constructed, but social status is.  In culturally elaborate societies, women determine who occupies what position in the social hierarchy ranging from male leaders to the lowest-status slave girls.  Women rule through beautiful young women’s sexual allure and mothers’ shaming.  Men yearn to hear, “I am pleased with you”:

{Durayd’s mother} said to Durayd, “My son, if you are unable to seek vengeance for your brother, then seek help from your maternal uncle and his band of Zubayd.”  This made him ashamed, so he swore not to put on kohl, anoint himself, eat meat, or drink wine until he had his vengeance.  Then he carried out the raid, brought her Dhuʼāb ibn Asmāʼ, and slew him in the courtyard, saying, “Have I brought you what you wanted?”  “Yes,” she replied, “and I am pleased with you.” [3]

Men are much more likely to be victims of violence than women are.  Horrific violence against men is a staple of comedy.  U.S. Selective Service registration continues as if men were naturally fit for being killed, while scholars obfuscate deadly discrimination against men rather than condemn it.  If you were to listen to men, occasionally you might hear the surprising voice of a self-conscious man:

Then we, no doubt, are meat for the sword
and, doubtless, sometimes
we feed it meat.
By a foe bent on vengeance, we are attacked,
our fall his cure; or we, vengeance-bent,
attack the foe.
Thus have we divided time in two,
between us and our foe,
till not a day goes by but we’re
in one half or the other. [4]

Women’s tahrid is a poetic go-between connecting a community’s times of men killing men and men being killed by men.  Women’s tahrid is mirrored poetically in the figure of the hyena.  The hyena enters the battlefield after the violence has stopped.  The hyena laughs over the slain men, copulates ecstatically with their dead bodies, and feeds on them.[5] 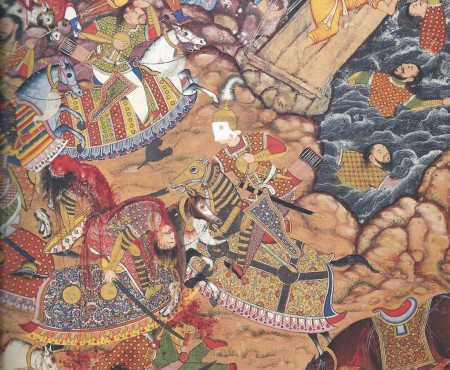 It used to be claimed that, when a man’s head was cut off, he would fall on his face.  Then, when his corpse bloated, his penis would swell and become erect and enlarged so that it would roll him over on his back.  Then, when the female hyena came to eat him and saw him in this state and saw his penis in this condition, she would try to have intercourse with him and satisfy her need in this manner.  Then she would eat the man after this had gratified her more than coupling with a male hyena.  One of the desert Arabs said that he had witnessed {a female hyena} doing this and also coupling with her mate and discovered that in the former state she thrashed about and cried out, whereas with the male hyena she did not.

Trans. id. p. 79.  Female hyenas have folded-over, impenetrable labia that resemble a male’s scrotum.  They have sex through their elongated clitoris (pseudo-penis).  See information about hyenas.