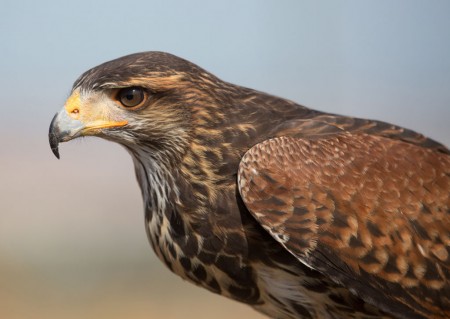 Marie de France’s lai Yonec poignantly expresses a young, noble woman’s carnal desire for a noble, young man. Like Matheolus, the lady was deeply unhappy within her marriage to an older, unpleasant spouse. She lamented:

I have often heard tell that in this country one used to encounter adventures which relieved those afflicted by care: knights discovered maidens to their liking, noble and beautiful, and ladies found beautiful and courtly lovers, worthy and valiant men. [1]

Then a young hawk flew into her bedroom. After she had gazed upon the hawk, it turned into a beautiful and noble knight:

The lady was astonished by this. Her face became flushed, and she trembled and covered her head, being very afraid. [2]

She strove to retain her modesty. She seems to have been afraid of her own carnal desire. The knight declared to her:

I have loved you for a long time and desired you greatly in my heart. I never loved any woman but you, nor shall I ever love another. Yet I could not come to you, nor leave my country, unless you had wished for me; but now I can be your beloved!

The knight knew the desire that the lady actually felt. That desire fantastically allowed him to appear. Quickly putting aside her modesty, the lady offered a spiritual rationalization. She would become his lover if he believed in God. The knight affirmed that he could easily pass that test. He did. Then they enjoyed each other’s company in bed.[3]

Marie de France forthrightly recognized the lady’s sexual ardor and possible dangers from it. After the lady and the knight spent the night together:

She begged him gently to come back and see her often. “Lady,” he said, “whenever it pleases you, I shall be with you within the hour, but observe moderation so that we are not harassed. This old woman will keep watch over us night and day and betray us. When she notices our love, she will tell her lord {the lady’s husband} about it. If this should happen as I say and we are betrayed in this way, I shall have no way of preventing my death.” [4]

Punitive social control of men’s sexuality has always been harsher than control of women’s. Reflecting medieval ideals of men’s subordination to women, the knight placed his fate in his lady-lover’s ability to moderate her carnal desire.

The lady’s sexual relationship with the knight dramatically changed her life. She had been morose and her beauty had faded. After just one night with him, she was completely transformed:

The next day she arose quite recovered and was very happy that week. She looked after herself well and her beauty was quite restored. Now she was more content just to remain where she was than to amuse herself in any other way, for she wanted to see her beloved often and to take her pleasure with him as soon as her lord {her husband} left. Night and day, early or late, he was hers whenever she wanted.

Unfortunately, her husband soon noticed her changed appearance. The husband and his old-woman helper contrived to observe the affair. The husband then carefully set up iron spikes to wound mortally the hawk when it flew through the window into the room. When that occurred, his wife was already pregnant with her and the knight’s child.[5]

It would be difficult to find
a young married woman
who has not been compelled and overwhelmed
by carnal desire. [6]

Saint Audrey vowed to remain a virgin throughout her whole life. To achieve that goal, “she vanquished all her carnal desires.” Saint Audrey’s conquest of desire is painful to consider:

Who can bring back to her heart
the love-games she played in marriage,
And the temptations of the flesh
when she was with her husband,
not being like this honorable virgin
whom God had kept for His own purpose? [7]

In her literary works, Marie de France, like other leading medieval women writers, showed loving concern for men. Her empathy for men and her humanity toward men is completely inconceivable to many medieval scholars today. That failure of modern understanding may in part reflect the sexual frigidity of our times.

The lady’s husband was a rich, powerful old man. The lady didn’t like his bodily attributes:

Cursed be my parents and all those who gave me to this jealous man and married me to his person. I pull and tug on a strong rope! He will never die. When he should have been baptized, he was plunged into the river of Hell, for his sinews are hard, and so are his veins which are full of living blood.

Yonec ll. 85-94, p. 87. After seven years of marital sexual relations, the lady bore no children with her husband. Her husband seems to have lacked seminal potency.

Shoaf (1993) translates phrases such as gentes e beles (l. 100) as “handsome, gentle.” The word “gentle” applied to a man in modern English suggests lack of physical potency and vigor. A translation like “noble and beautiful” more accurately reflects the lady’s sexual desire for a man with social status and physical beauty.

[2] As Shoaf (1993), p. 5, notes, the language of this scene and the resulting pregnancy has parallels with the annunciation of the angel Gabriel to Mary. Medieval writers were willing to play freely with sacred texts. Consider, for example, Boccaccio’s story of Frate Alberto and Madonna Lisetta and the medieval Latin poem Si linguis angelicis. For a different literary play associating a hawk (falcon) and a person, see the fabliau Guilluame au Faucon (William of the Falcon).

But ultimately it is for men as well as for women, for all individuals, that Marie renders personal feelings such as loneliness, alienation, frustration, and injustice significant and so legitimizes discontent and action taken to allay these feelings. In a highly authoritarian and depersonalized society, Marie proposes that personal happiness and well-being matter. She unlocks the doors to the ebony towers and lets the malmariées, both the literal and the figurative, escape and run down to the sea.

Willging (1995-96) p. 134. That statement surely applies to men from the lowly man in Jerusalem to Matheolus to Michael D. Turner.

My sweet beloved, for love of you I am losing my life. I told you what would come of it: your appearance would slay us.

When a bride goes from her house to the church to marry her betrothed, the best wish that is made for will come true, on condition that she immediately thanks the well-wisher, otherwise that will avail her nothing.
Gloss {discussion}. A very gallant lady named Perrine Bleue Levre said: “I have found an exception to this chapter because, when I was on my way to marry Janot Bleue Levre, my husband, my aunt greeted me with the wish that I would have a good stiff encounter with him, and I thanked her. But it has been completely the opposite: I found him very soft because he had been knotted {subject to an impotency spell}: nothing but cold comfort!”

Who else could fathom
the yoke she bore in marriage
or the temptation of the flesh
when she was with her husband
other than this honorable virgin
whom God had kept for His own purpose?

Id. p. 79. Giving a coherent meaning to the full sentence is difficult. Blanton quoted in translation only the first four lines:

One is able to remember in her heart
The fun she had in marriage,
And of the carnal temptation
When she was with her husband.

[image] Harris’s Hawk (Parabuteo unicinctus) in the Community of Madrid, Spain, 18 October 2014. Thanks to Carlos Delgado and Wikimedia Commons.