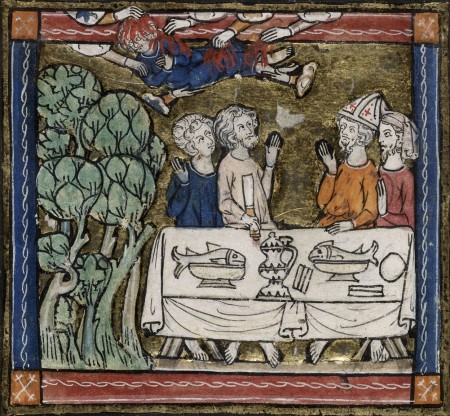 The myth of the Holy Grail became central to European culture mainly through Chrétien de Troyes’s late-twelfth-century French romance Perceval, The Story of the Grail. Perceval’s father was castrated and his two older brothers killed in violence against men. Perceval’s mother taught Perceval to be, like the fatherless knight Boucicaut, a woman-server. Do you want to know the wisdom of the Archpriest of Talavera? Ask! Generations of students have been taught to remain silent. To discover the Holy Grail is to break the spell of gynocentrism.[1]

In the traditional understanding of chivalry, a good knight focused on performing at night in bed with his wife. Perceval’s mother, reflecting deeply rooted medieval anti-meninism, valued her husband for his skills in violence against men. She told Perceval:

No braver, more worthy knight,
Ever existed, more famous
And more feared, anywhere in all
The Western Islands, than your father. [2]

A man being famous and feared relates to a good knight only through the men-oppressing cultural construction of courtly love. That gender construct encourages the brutalization of men:

Your father, let me tell you,
Was wounded between the legs
And his whole body was crippled,
All the lands, and the immense
Treasure his bravery had won
Began to fall away,
and he died terribly poor. [3]

Perceval’s father didn’t respect the worth of his own sword and didn’t use it properly. He should have married a rich, beautiful woman like Circe and enjoyed an easy life. Men who fight to acquire wealth that is easily taken away are fools. What men naturally have is wondrously good. Men need only to take care not to be castrated.

Men must also ignore teaching that devalues their lives, even when that teaching comes from their own mothers. Perceval’s mother saw her husband suffering from castration. She saw her two older sons die in violence against men. Yet she taught her son Perceval:

Should you find a lady in need —
Anywhere, near or far —
Or a girl in need of protection,
Always offer your aid,
If they ask for it, for there’s no honor
That isn’t built on that base.

The honor of being a woman-server is built on the base of gynocentric society. Breaking the spell of gynocentrism starts with men saying “no” to damseling women.

Mothers should develop in their sons a sense of entitlement to love simply for being the men that they are. Perceval’s mother, in contrast, described love for Perceval as a rare gift that he should neither seek nor expect:

And if you court a woman,
Be careful you don’t harass her:
Do nothing that might displease her.
A kiss means a lot to a girl,
So if she allows you a kiss
Don’t ask for anything more:
Renounce it, I beg you, in my name.

The best response to such motherly advice is, “Hey mom, I’m hungry. Make me a sandwich!” Then read some medieval women’s love poetry for men’s seductive learning.

Perceval listened to his mother without understanding and foolishly sought to follow her advice. One day, he came across a girl sleeping alone on a bed in a tent. He entered the tent:

And the boy, innocent fool
That he was, said, “Girl, I greet you,
As my mother taught me I should.
That’s what she taught me: always
Greet a girl, no matter
Where you happen to find her.”

Imagining that they are doing what their mothers told them to do, boy-men are a menace to civilized society. So it was with Perceval. The girl told him to leave:

Unconcerned about that threat of violence, Perceval forcefully grabbed her and kissed her twenty times or more. That’s bad. That’s wrong. Perceval actions reduced the girl to misery, made her lover furious, and caused at least one other man to have his head chopped off. Perceval should never have sought to do as his mother taught him.

One day when seeking lodging, Perceval met the beautiful woman Blanchefleur. She took him by the hand and led him to a secret room. There she sat next to him on a bed covered with a silken feather-quilt. Perceval said and did nothing. He maintained manly silence and immobility until Blanchefleur first spoke to him. She apologized that she could not offer him a better dinner.

Perceval went to bed by himself. He slept soundly and peacefully. Banchefleur, however, was too emotionally tormented to sleep. She got up during the night and went to Perceval’s room. She was dressed only in a nightshirt and a short cloak of bright red silk. Perceval was asleep:

And when she reached his bed
She stood there, weeping and sighing.
And then she knelt, bending
Over him, the tears flowing
So freely that they covered his face:
She could manage nothing more.
The flood of tears woke him,
Startled, wondering why
His face was covered with water.
And then he saw her kneeling
Next to his bed, and felt her
Clutching him round the neck.

Perceval didn’t tell her to leave. He didn’t accuse her of sexual harassment. He didn’t even blame her for wetting his bed. In short, Perceval acted with decency and compassion.

The rest of the story follows the pattern of manipulating men to engage in violence against men. Blanchefleur declared to Perceval that she was going to kill herself tomorrow. Stay away from crazy! She explained that some strong, bad, famous knight was besieging her castle. That’s not Perceval’s problem. But gynocentric ideas of glory, bravery, and courage promote dangerous, anti-meninist action to save a damsel in distress:

Ah, what an opportunity
For glory, if he’s brave enough
To seize it. And that’s what she came for,
Dropping her tears on his face,
In spite of the story she’d told him.
She’d come for that and nothing
Else, hoping, if he had
The courage, he’d decide to fight
For her castle, and for her lands, and for her.

The ersatz holy trinity is her, her, her. Perceval held her in his arms and kissed her. She didn’t tell him to stop. She spent the whole night with him, kissing all night long. That’s how men are used and abused.

Blanchefleur goaded Perceval into a dangerous fight. She said to him:

I see quite plainly that neither
Your age nor your courage are such
That you could possibly stand
Against so famous a knight,
So fierce and strong, as now
Awaits you, outside, for man
To man you’re bound to lose.

Perceval didn’t understand what she was doing:

“Just wait and see,” he said,
For I’m certainly going to fight him,
And nothing you say will stop me.”
She’d spoken as if to hold him
Back, though this was a battle
She longed for.

The fatherless Perceval needed the guidance of the Archpriest of Talavera. The Holy Grail is knowing the story of the glass flask. The alternative is continuing the folly of knights like Perceval and Suero de Quinones. Only with guile can men be freed from the spell of gynocentrism.[4]

Only something experienced as the agency of an immanent exteriority, for Chrétien grace, might bring natural pity or subcortical empathy to crave justice sufficiently to undo the totalising grip of those cravings for self-advancement to which necessities of flesh and exigencies of politics would seem to bind us. Absent such transformation, Chrétien intimates, what is wounded in psychic-sexual and socio-political life cannot begin to be healed.

Wehrs (2014) p. 294. The Archpriest of Talavara’s writing can be understood as an artifact of immanent exteriority.

The University of Ottawa has made available online an Old French text of Chrétien’s Perceval (switch text encoding from Unicode to Western to see the text correctly). Kirk McElhearn has provided the early part of the story, with the Old French and his modern English translation. Here’s a summary of the story. For literary history of Perceval, Alan Lupack at the Camelot Project.

[3] Chrétien, Perceval ll. 435-41,trans. Raffel (1999) p. 15. While in Perceval the father dies of grief after the death of his two sons in violence against men, in the thirteen-century Bliocadran Prologue the father (Bliocadran) is killed in a knightly tournament three days before Perceval is born. Eleven of Bliocadran’s brothers had also been killed in tournaments. To “protect” her son, Perceval’s mother takes him deep into an isolated, waste forest:

he must see no man
except the trusted few.
Thus she planned to protect him

If you should see any people
who are all dressed up
as if they were covered in iron,
remember they are really devils,
wicked and winged,
all ready to devour you.
Don’t stop to talk with them,
but run and come back home
and cross yourself with care

Id. ll. 755-76. The Bliocadran Prologue blames men for violence against men. It exonerate women, in particular Perceval’s mother, from responsibility for violence against men. Seeking to protect men from the distorted, men-destroying, medieval European understanding of chivalry is, however, unquestionably a praiseworthy endeavor. Better understanding of the Holy Grail contributes to that endeavor.

Castration was a significant issue for men in medieval Europe, as it is in different forms for men today. In Chrétien’s Perceval, the Fisher King was also castrated:

He was wounded in battle, and so badly
Hurt, so maimed, that without
Help he can’t even walk.
A spear struck him right
Between the legs, and the pain
Is still so great that riding
A horse is impossible.

While the reader may well overlook the fact that Chrétien pioneers a new genre of lay theological inquiry in Perceval, he can scarcely avoid being affected by the rich spiritual dynamics of the narrative.

Tan (2014) p. 149. May the rich spiritual dynamics of Perceval today work to break the spell of gynocentrism!

7 thoughts on “with castrated father, Perceval taught to be woman-pleaser”