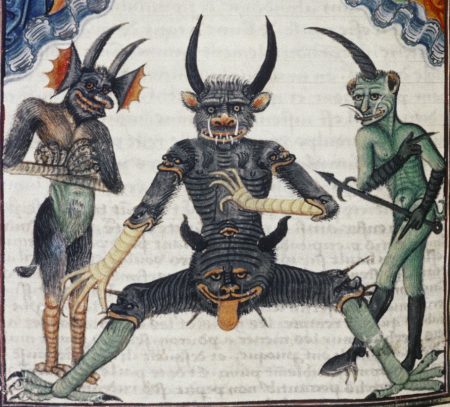 Today in higher education, students are taught about the demonic male, the pathology of masculinity, and the power of the male gaze. Medieval education tended to be of higher intellectual quality. Nonetheless, Egbert of Liège’s early-eleventh-century schoolbook for young boys indicates that, even in the more enlightened medieval period, students were taught demonology of men’s sexuality.

Like Hesiod’s Theogony, demonology of men’s sexuality draws upon the cultural resources of castration culture. Medieval Latin literature addressed castration culture with acute perceptiveness in such masterpieces as Radulfus Tortarius’s Sincopus and John of Hauville’s Architrenius. Medieval authors dared to tell of Ovid being castrated for defying the great mother goddess Cybele. Medieval authors narrated the effects on Percival of his father being castrated. From this well-laden ship of castration culture, Egbert of Liège drew simple, disparaging lessons for young boys.

Silence and castrate yourself. This oppressive teaching, so familiar to men today, Egbert drilled into young boys with heroic Latin hexameter poetry:

Cut off the member that impedes you the most, I say.
What is the source of evil? I argue it is these two: the tongue and the genitals.
If you want to be a strong man, use your strength, O conqueror.
If you are willing to cut, then do away with both of them like a man.

Act like a man! Be a strong man! The social imperatives of gynocentric society presume that men aren’t naturally virtuous. The demonology of men’s sexuality starts with denying men’s birthright. It depends on forcing men to work to be men. Silencing men is necessary to prevent men from speaking out about injustices against men.

Throughout history, some brave men have refused to silence themselves. Juvenal wrote boldly and frankly to dissuade his friend Postumus from marrying. Loqui prohibeor et tacere non possum. They forbid me to speak, and I cannot be silent. Thus Rufinus urged his friend Valerius not marry. Matheolus courageously shared his lessons from the school of hard knocks that was his marriage to Petra. With just a little exposure to masterpieces in literature of men’s sexed protest, even the most dim-witted boy can understand a fundamental lesson: get married under gynocentrism only at grave risk to your well-being.

Men often need to be pressured into marriage. Shaming men — “you’re afraid to get married” — has been a common tactic throughout history to pressure men into marriage. In the Middle Ages, Egbert taught young boys that even a man reluctant to have sex with an ugly woman is a coward. Egbert taught that lesson with a fable about a man and a bear:

A coward was ordered to lie down with an ugly beast.
But after he had kissed the bear, he shunned it.
He was then urged to poke his rod into its bowels.
“Men, I could scarcely bring myself to touch it with my lips. Where are you pushing me?” he said.
“Let no friend ask that I venture greater things after this.
Such terror infused me from what I have already ventured,
I was sure I was going to crap myself with a filthy pile.”

This fable concludes with the moral it teaches:

One terrified by the smallest things, balks at more serious ones in his fear.

Heterosexual men tend to prefer beautiful, feminine women for mates. Egbert inverted such a female mate with the figure of an ugly, male bear. That simple literary move drills into young boys the lesson that men must be willing to marry any women, or they will be socially disparaged as not real men.[3]

In conjunction with urging young boys to be silent, to castrate themselves, and to go obediently into marriage with violent, ugly, mannish women, Egbert taught them not to struggle against men’s subservience to women. Young boys under Egbert’s tutelage learned that men’s physical strength and intellectual capabilities are no match for women’s actual superiority:

A woman laid low the first man {Adam}, Samson, and Solomon.
A woman conquered the newly formed man, the strong man, the wise man.
The weak sex struck down the strong one through temptations.

Misrepresenting women as the “weak sex” is obfuscation in the service of gynocentrism. If women actually were the weak sex, then men wouldn’t be dying from violence four times as frequently as women do, and men wouldn’t be subject to social injustices that are socially deprived of that name. Unlike many professors today, Egbert deserves credit for instructing students in the reality of men’s subservience to women.

Scholarly effort is in decline everywhere as never before.
Indeed, cleverness is shunned at home and abroad.
What does reading offer to pupils except tears?
It is rare, worthless when offered for sale, and devoid of wit.

Compared to Egbert’s time early in the eleventh century, the situation is even worse today. Critical gender theory is produced with little scholarly effort. Truly clever work is shunned and ignored. What pupil wouldn’t be reduced to tears while reading ignorant scholarship proclaiming misogyny? After many expensive years of higher education, a student is firmly indoctrinated in the demonology of men’s sexuality and knows nothing about real sexism.

Babcock’s Latin text is essentially that of Voigt (1889). In this and subsequent quotes, I’ve lineated Babcock’s translation to match the Latin text to help non-Latinists to examine the Latin.

The earliest known version of the story of the peasant and his domineering wife is also found in Fecunda Ratis. It’s 1.1378-84, “Concerning a wife hostile to her husband {De uxore infensa marito}”. The great medieval women writer Marie de France reworked this story to provide the earliest known representation of the inverted v-sign, a sexually insulting gesture that remains common in the United Kingdom today.

[2] Egbert, Fecunda Ratis 1.1419-26, Latin text and English trans. Babcock (2013) pp. 146-9 (including subsequent quote above), with my changes to the translation. These verses are titled “About the man who kissed a bear {De eo, qui osculatus est ursum},” Babcock called this fable “extremely puzzling.” Id. p. 328, n. to 1419-26. It immediately follows verses describing five stages of “flaming love {flagrantis …. amoris}”: sight, speech, touch, kisses, and sexual intercourse. Babcock notes that the fable “would be (and probably should be) interpreted sexually by the reader.” Id.

My changes to Babcock’s translation help to make clear the fable’s relevance to the gender oppression of men. Babcock translated concidere as “slaughter” and venabula figat in alvum as “stick his lance in the belly of the beast.” I follow Babcock’s suggestions for sexual meanings of these terms. The idiomatic phrase “belly of the beast” seems to me to have misleading connotations here; moreover, the Latin doesn’t repeat the noun “beast {pecus}” from the first verse. For audere / ausis, I use the verb “venture” rather than Babcock’s “dare” to be more consistent with the sense of the man’s reluctance. For “defile myself with a filthy mass,” I use more concrete, colloquial diction consistent with the Latin.

How many cups, always bitter, does this sex serve up?
The first man fell by this disease, and Samson and Solomon.
What wonder could this poisonous snake not topple?

Fecunda Ratis 2.539-41, trans. id. pp. 232-3. Men deserve compassion for their personal suffering. But at the level of social structure, men share equal blame for the injustices of gynocentrism.

One thought on “medieval education: teaching demonology of men’s sexuality”