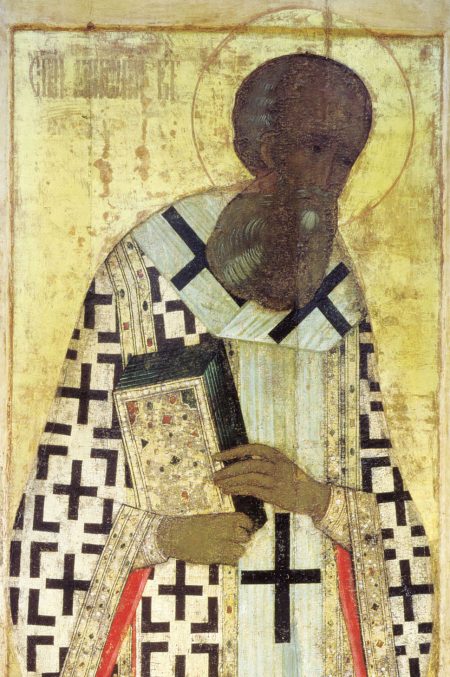 In 384 GC, the Patriarch of Constantinople Gregory of Nazianzus wrote to the young bride Olympiada. She was a wealthy descendant of the Roman imperial family. Gregory knew her personally and acted as her spiritual father. As a wedding gift, he gave her a 111-verse poem of fatherly advice. That poem shows that an extraordinarily wise man recognized, about 1600 years ago, that talk about gender equality is silliness relative to women’s actual gender superiority.

Gregory’s poem for Olympiada indicated the extraordinary privilege of elite women relative to ordinary men. While ordinary men commonly worked on the verge of starvation, elite women led lives of luxury and feminine vanity. Gregory warned Olympiada against adorning herself with gold, precious stones, fancy dresses, and cosmetics. He urged her to distinguish herself from other elite women:

The expensive and fancy dresses must remain for those women that have no desire for the life beyond and do not know what the meaning of spiritual struggle and attainment of virtues is all about; this type of woman cannot possibly comprehend the spiritual radiance and brilliance of a life in Christ. You have aimed towards greater goals and for a higher purpose for your life. … Stay away from conceited and ostentatious women whose mind is preoccupied with external appearances and social circles, all for the purpose of vainglory and public display.

Such women today write about patriarchy and men’s oppression of women. They do so to gain public attention and fashionable intellectual status. Women who truly care about social justice speak out on behalf on men.

Set aside the silliness of equality among the sexes that some of your contemporaries preach, and attempt to comprehend the obligations of marriage. … You must surely be aware of how easily anger overtakes men. They cannot maintain their temper, and they often appear as wild lions. It is at this exact moment that a woman must remain stronger and display her superiority. You must play the role of the lion-tamer. What does a lion-tamer do when the beast starts roaring? He becomes even calmer than usual and through kindness and persistence he overcomes the lion’s wrath. He speaks to the lion kindly, in a soft but firm voice, he caresses it, he attends to it, he pets it, and little by little calmness is restored.

Historically, men have been disparaged as dogs, pigs, wolves, and animals sexually inferior to donkeys. Not all men are like that. Gregory, who was a highly learned theologian, stated merely that men “often appear as wild lions.” More importantly, Gregory recognized that, in general, women are stronger than men and superior to men in social position and social power.

While Gregory never produced a treatise on gender theory, his kindly, fatherly words to Olympiada suggest that he had a sophisticated understanding of intersexual dynamics. He urged Olympiada to love her husband according to the Christian model of love:

In your marriage, fondness, affection and love must be strong and persistent for him whom God has selected to be your life partner. This man is now the eye of your life and the delight of your heart. And if you ever perceive that your husband possibly loves you more than you love him, do not take advantage of his feeling by attempting to gain the upper had in your marriage. That is plainly wrong as it is totally against the writings of the Holy Gospel!

The leading medieval theologian Peter Lombard recognized that courtly love puts men in a subservient position relative to women. Men’s inferiority to women in identifying biological offspring has enormous implications for social inequality. Yet gender inequality ultimately has even deeper roots. The fundamental gender equality is this: men typically love women more than women love men. That inequality in love allows women to gain the upper hand over men. The Christian model of love, as well as women of great culture and learning, challenge prevalent inequality in love between men and women.

Gregory told Olympiada the truth about gender equality rather than the conventional lies so prevalent throughout history. A woman can free herself from criminal justice by baring her breasts to a jury. When a woman claims rape, men foolishly limit themselves to listening and believing and acting to punish and even kill other men. A woman’s tears overwhelm any public reason. Rome was explicitly founded on the principle of the Sabine women’s social superiority. Almost all other societies have been based on belief in women’s superiority to men. Gregory of Nazarianus deserves extraordinary praise and honor for speaking truth about gender power.

The quotes above are from Gregory of Nazianzus’s letter to Olympiada in 384 GC. The translation is from the Orthodox Christian Information Center’s website. The name of the translator isn’t given. I’ve made some non-substantial changes to the translation. The Greek text and Latin translations (prose and verse) are available in Patrologia Graeca (PG), vol. 37, p. 1542.

Gregory of Nazianzus was an eminent theologian and church leader who lived from about 329 to 390 GC. Gregory of Nazianzus, Basil the Great, and Gregory of Nyssa are known as the Cappadocian Fathers. With Basil the Great and John Chrysostom, Gregory of Nazianzus is regarded as a Holy Hierarch. He is also regarded as a saint. He is one of only three persons generally known by the epithet “the Theologian.” For more information on Gregory and a translation of some of his poems, Dunkle (2009). Here’s a large collection of Gregory’s writings. Although widely revered, Gregory’s insightful contribution to gender theory has been almost totally ignored.

[image] Excerpt from icon of Gregory of Nazianzus, the Theologian. Made in 1408 and attributed to Andrei Rublev. Originally in the Dormition Cathedral, Valdimir, Russia. Now in the State Tretyakov Gallery (Moscow), inventory # 19725. Thanks to Wikimedia Commons.

9 thoughts on “women’s superiority: the silliness of talk about gender equality”