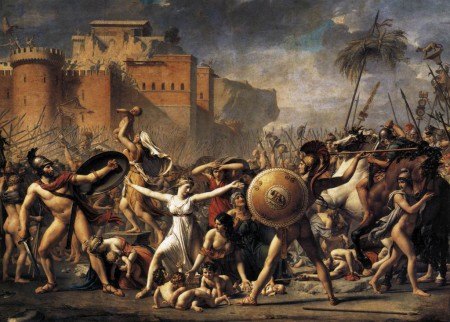 In ancient warfare, armies sought to kill men and to capture women. With the progress of civilization, armies now seek only to kill men. The vast majority of persons today forcefully abducted from their ordinary lives are men incarcerated within their own societies. Women captives in the ancient world might marry their captors, be intimately integrated into their captors’ lives, gain co-ownership of their captors’ property, and acquire significant new political rights. Men captives in prisons and jails today receive no such benefits. In Western civilization, the harsh anti-men gender inequality in both killing and capturing can be trace back about 2750 years to Roman men abducting Sabine women to be their wives.

At the founding of Rome, after being captured by the Roman men and becoming their wives, the Sabine women received considerable benefits. The Roman leader Romulus promised the Sabine women co-ownership of their husbands’ properties, civil rights, and free-born status for their children.  Romulus pledged that their husbands would be kind and affectionate to them and would do their utmost to console them. The Roman men wooed their Sabine women-captives. To excuse their capturing the Sabine women, the Roman men pleaded their passion and love for them, “the most moving of pleas to a woman’s heart {maxime ad muliebre ingenium efficaces preces sunt}.”[1]

Many men labor strenuously to acquire property and struggle desperately to gain passionate love. The Sabine women gained both through being captured. In a wide variety of cultures and times, women actively promote and encourage their bridal capture by favored men. Nonetheless, in accordance with a fundamental principle of communicative economics, the capture of the Sabine women has to this day been widely called the “rape of the Sabine women.”[2]

In literary history and life, deaths of many men attract much less attention than capture of many fewer women. Roman soldiers captured 30, or 527, or 683 Sabine women (reports vary).[3] In response, an army of Sabine men attacked Rome. With the help of a strong, independent woman who betrayed Rome, the Sabine army seized the Roman citadel.[4] The Sabine army numbered twenty-five thousand men on foot and about a thousand men on horses. The Roman army that fought against the Sabine men numbered about twenty thousand men on foot and about eight hundred on horses.[5] The battle between the Sabine men and the Roman men was brutal and intense. Surely many thousands of men were killed, probably more than when Greek and Trojan men fought at Troy over Helen. Accounts of the “rape of the Sabine women” almost wholly ignore the many Sabine and Roman men killed within that story.[6]

Nearly everyone has failed to appreciation the wisdom of the Sabine women. Like leading women writers of the Middle Ages, the Sabine women loved their husbands and fathers and cared for men generally. The Sabine women, seeking to halt the killing of Sabine and Roman men, declared:

We are the cause of war, the cause of wounds, and even death to both our husbands and our parents. It would be better for us to perish than to live as widows or orphans, lacking either of you.

The Sabine women’s statement is consistent with insights from pre-Islamic Arabic poetry to events of the twenty-first century. But the Sabine and Roman men, along with subsequent classical scholarship, has ignored the Sabine women’s wisdom. International elites today have even formed a preposterous consensus that “violence against women is the most pressing human rights problem remaining in the world.” The Roman and Sabine men at least understood that the Sabine women wanted them to stop killing each other. Seeking to do what women want, the men stopped killing each other.

Apparently reasoning that they owed their lives to the Sabine women that they had captured, the Roman men established institutions of female privilege. Many men today act like servants opening doors for women and like inferiors cowering in the back of elevators waiting for women to exit first. Roman men following their capture of the Sabine women created such social institutions of female privilege. Among those that the Roman men created:

Men upholding such institutions contribute to the prevalence of sexless marriages. They also perpetuate the social subordination of men to women. In terms of economic privilege, Roman men exempted Sabine women from all labor and drudgery except spinning thread. That exemption provided the foundation for an enduring gendered division of earning and spending: husbands labor to earn money that wives spend, or alternatively, men work under familial and legal obligation, while women work for personal fulfillment.

Roman men capturing the Sabine women generated gynocentric society. Juvenal in his Satire 6 would raise a vehement and courageous voice of men’s sexed protest. Roman men became reluctant to marry women. None of these acts could change the founding order of Rome. The foundational problem was men’s sexual deprivation and desperation.[9] That’s what drove the Roman men to capture the Sabine women. Like the misery of sexless and married men, the misery of sexless and unmarried men must be addressed to establish a humane and enduring civilization.

In modern academic scholarship, men wooing women tends to be associated with harm to women:

we must recognize that men {Roman men wooing their Sabine women captives} are compounding their original act of violence by an act of bad faith — they are, in fact, increasing the distance between themselves and their captives even as they seem to be bridging it

Miles (1992) p. 185. In the title to his article, Miles uses the word “theft” to describe the abduction of the Sabine women. That diction highlights prevalent misunderstanding about women, men, and property. See note [2] in my post on violence and gender.

[2] Bridal capture has been a prevalent, socially complex institution:

There is a thin line between an abduction in which the girl, though she was not aware beforehand of plans for her kidnapping, anticipates some sort of action and is willing to be ‘stolen’, and an actual elopement planned by the two young people together. The disguising as an abduction of what is in fact a mutual agreement serves two useful purposes: it obscures any indication of sexual initiative on the girl’s part, which would be regarded with horror by her parents and by the rest of the community, and it preserves the male’s honour and demonstrates convincingly his courage and manliness. … there appear to be no geographical or religious boundaries within which the phenomenon of marriage by abduction occurs — it is found among Christians (Greece), Moslems (Turkey, Bosnia), and others (Tzeltal Indians in Mexico), in endogamous societies (Turkey) and those which place restrictions on the marriages of close kin (Greece, Tzeltal), and throughout the world, from Mexico to India.

Romulus united them {Sabine women and Roman men} according to the customs of each woman’s country, basing the marriages on a communion of fire and water, in the same manner as marriages are performed even down to our times.

[4] The Roman woman Tarpeia secretly admitted the Sabine king Tatius and his troops into the Capitol. This aspect of the story has many variations, including a variation exculpating Tarpeia. Men tend to be reluctant to acknowledge the possibility of women’s betrayal:

The failure of any single version {of Tarpeia’s betrayal of Rome} may attest to the discomfort felt by the Romans — and Greeks — in coping with the topic of betrayal, especially betrayal by a woman.

Brown (1995) p. 304. Such discomfort is evident in the convoluted claim that accounts of Tarpeia’s betrayal indicate that men regard women as inherently suspect and difficult to predict. Miles (1992) p. 184. Such disparagement of men is highly predictable.

By the second half of the fourth century, the abduction of the Sabine women had become a play performed frequently in the Circus Maximus of Rome. The performances were “lewd, vulgar, and well-attended.” Holden (2008) p. 138.

Holden speculates that fear of violence may have stimulated performances of the abduction of the Sabine women:

The story of the abduction of the Sabine women may have been on peoples’ minds in the later fourth and fifth centuries because of the increased danger to Rome and the city’s women posed by tyrants, heretics, pagans, and, especially, barbarians as the city and the empire declined

For modern gynocentric accounts of the abduction of the Sabine women, Miles (1992) and Brown (1995). Both refer to the Sabine women being raped. Both ignore the many Sabine, Roman, and other men killed.

they {men} are unable to find a peaceful way out of the mess created by their pride and violence. … It is the women who break the cycle of violence, suited to this role by their unwarlike sex and relational social function as wives and mothers.

Brown (1995) p. 314. Medieval literature such as the Tale of Melibee shows much more sophisticated literary understanding of women, men, and violence.

[8] These female privileges are listed in Plutarch, Parallel Lives, Romulus 20.3. The exemption of women from labor is from id. 19.7. Men classical scholars in recent decades have defined themselves in ways that does not allow them to perceive women’s socially constructed superiority to men:

As perceived inferiors, the Sabine women can never exercise enough influence to outweigh the public concerns by which men in this world define themselves.

[9] With his characteristically sophisticated irony, Ovid heightened the Roman men’s brutality in abducting the Sabine women. He concluded his account of the abduction with an outrageous claim:

Old Romulus the prize for soldiers knew,
For such a prize I’d be a soldier too!
Thus was the fashion started, and the fair
Still find the play a peril and a snare.

Ovid, Art of Love {Ars amatoria} 1.131-4, from Latin trans. Melville (2008) p. 90. Ovid mocked the Roman elegiac soldier of love. He taught men how to seduce verbally attractive women at theaters like that from which the Sabine women were abducted. Moreover, Ovid respected women’s strong, independent sexuality. He recognized that seeking men was a continuing reason that women went to the theater:

So to the play the well-dressed bevies throng,
Such wealth of choice as keeps one doubting long.
They come to look and to be looked at too.
Ah! Virtue, it’s a fatal spot for you.

Ovid, Art of Love {Ars amatoria} 1.97-100, trans. id. p. 89. Long regarded as an eminent teacher of love, Ovid continues to offer useful instruction to men on how to avoid sexual deprivation and desperation.

[image] The gynocentric foundation of Rome.  The Intervention of the Sabine Women. Jacques-Louis David. Oil on canvas painting, 1799. Held in the Louvre Museum. Thanks to the Web Gallery of Art and Wikimedia Commons.

Holden, Antonia. 2008. “The Abduction of the Sabine Women in Context: The Iconography on Late Antique Contorniate Medallions.” American Journal of Archaeology. 112 (1): 121-142.