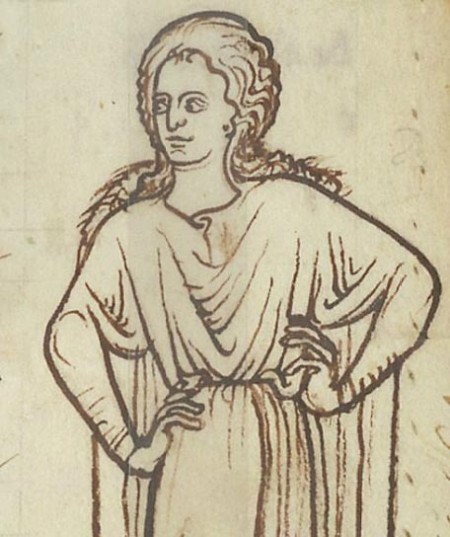 Only as fire does not burn, does flesh not lust
{Si potest ignis non urere, potest caro non concupiscere} [1]

The chapter then provides a biblical figure. Like the Jebusite in Jerusalem, lust is an aboriginal inhabitant in the land of humanity.[2] The chapter further adds non-Christian authority from an epistle praising rural life to a city-loving friend:

You may drive nature out with a pitchfork,
But she will come back again. [3]

She {a wife} wants to master, and will not be mastered. She will not be a servant, she must be in charge. She must have a finger in everything. [4]

There are three things which keep a man from staying home: smoke, a leaky roof, and a shrewish wife.

De miseria humanae conditionis describes the dilemma of a husband with an adulterous wife. Men’s natural lustfulness leaves them without appealing choices as husbands:

the burden of marriage is heavy indeed, for “He that keeps an adulteress is foolish and wicked,” and he is the very protector of shame who conceals his wife’s crime. But if he puts away the adulteress he is punished for no fault of his own, since while she is alive he is forced to be continent. [6]

Being forced to be continent oppresses men. Yet living with an adulteress-wife is also difficult:

Who could ever calmly put up with a rival? Suspicion alone tortures the jealous man, for although it is written, “They shall be two in one flesh,” a man’s jealousy will scarcely tolerate two men in the flesh of one woman.

Upon divorce, gender-biased family courts commonly deprive men of custody of their children and impose crushing monthly payments that ex-husbands must make to their ex-wives. To promote gender equality, some men today are learning to support their adulterous wives within marriage. Yet educating men to embrace adulterous wives falls short of overcoming the effects of anti-men gender bias in family courts. The lustful man gets married at his peril.

De miseria humanae conditionis includes delightful elements of self-consciousness and satire. After a lengthy, lengthy enumeration of sinners of specific types, Lotario adds “and finally those ensnared in all vices together.” In a chapter on compassion, Lotario speculates that Jesus wept at the tomb of Lazarus “perhaps because He had called the dead man back to the miseries of life.” Lotario, who was a priest, declares that lust assails even priests:

who embrace Venus at night, and then worship the Virgin at dawn. … At night they excite the son of Venus on a bed, at dawn they offer the Son of the Virgin on an altar. [7]

Some medieval Christians idealized those who restrained from sex within marriage.[8] In De miseria humanae conditionis, Lotario titled a chapter “De miseria continentis et coniugati” (“The misery of those restraining from sex and married”). Given Lotario’s keen recognition of men’s natural burden of lust, perceiving satire in that chapter title isn’t anachronistic.[9]

While anti-men gender bias in family courts and forced financial fatherhood must be addressed, broader policy initiatives are needed to lessen men’s misery from their natural burden of lust. Governments and employers should extend benefits and support to married men’s mistresses. Public provision of affordable prostitutes through a modest expansion of the civil service should be explored.[10] More funding should be allocated to research and development of sex bots. Many men many times a day experience the emotional and physiological burden of having an erection. Special, low-cost, subsidized nutritional supplements should be made available to men to help them recover from the labor of their erections. Persons — women and men — who dress in ways that could trigger a man’s erection should carry trigger-warning signs. De miseria humanae conditionis could become the text for a new national conversation about lessening misery, especially the misery of sexless and married men.[11]

As Pope Innocent III, Lotario dei Segni recognized and affirmed gynocentrism. He described himself as married to the church and described the church as “mother and teacher {mater et magistra} of all the faithful.” “Fatherly severity” generated fear, while love for “the mother church” created “a more profound bond.” Shaffern (2001) pp. 73, 83. This gendered understanding has regrettably contributed to anti-men bias in child custody decisions and relatively little social concern for violence against men.

One man is attracted by a woman’s figure, another by her charm or humor or personality; one way or another she is taken, since she is besieged on all sides.

[6] De miseria humanae conditionis 1.17, trans. Dietz (1969) p. 21. The subsequent quote is from id., with an embedded quote from Genesis 2:24. Under Christian church law, a man could not have sex outside of marriage and could not remarry until his spouse died.

[8] The Christian practice of refraining from sex within marriage is ancient. For a poignant example of the misery that such practice can impose on a husband, consider Margery Kempe’s husband. Sexless marriages are probably much more common today and bear no relation to Christian ideals. On sex differences in lust and the misery of lack of sex for men, Baumeister (2010), pp. 221-9.

[9] Dietz (1969) obscures the satirical reading by mistranslating the title as “Of the misery of married and single people.” The chapter is clearly addressed to men. For readers today, being single does not imply not having sex. Moreover, continentis is not necessary a characteristic disjoint from marriage. The two participles continentis and coniugati have genitive singular masculine/neuter forms. Moreover, satire is an aspect of the text. On satire of the Roman Curia in De miseria humanae conditionis, Moore (1981). The ambiguity of et (“and”) is a significant aspect of the title.

[11] As Pope Innocent III, Lotario dei Segni strongly supported clerical celibacy. Smith (1951) Ch. 5. However, he showed his appreciation for the burden of lust with his policy toward female prostitutes. In a Papal Bull dated April 29, 1198, Pope Innocent III declared:

it is necessary to ask women who live voluptuously and permit anyone indifferently and without concern to have relations with them to contract a legitimate marriage in order to live chastely. With this thought, we decide by the authority of these presents that all who will rescue public women from brothels and marry them will be doing an act which will be useful for the remission of their sins.

Trans. Fliche (1994) p. 70. Marrying a former prostitute probably lessened the risk of a man suffering from a sexless marriage.

Innocent III’s willingness to engage in policy experiments is apparent in his response to Francis of Assisi. After a single meeting, Innocent III granted Francis and his brother penitents permission to follow lives of poverty, itinerant preaching, and physically rebuilding churches. See, e.g. Cunningham (2004) pp. 30-5. Innocent III responded to the needs of the times. A key need of our time is to support men’s sexuality.

Baumeister, Roy F. 2010. Is there anything good about men? how cultures flourish by exploiting men. Oxford: Oxford University Press.

One thought on “understanding the misery of sexless and married men”