On April 1st in fourteenth-century Spain, Don Gil, the Archbishop of Toledo, conveyed to the clergy of Talavera a mandate for celibacy. Talavera was a bustling provincial medieval trading town. The Talavera clergy were outraged at the imposition of celibacy.

The Archpriest of Talavera convened the clergy and with great anguish read the mandate. It was heart-wrenching:

With teardrops falling from eyes, he started on this speech
and said, “The Pope has given me this mandate to impart,
and I must read it to you, whether I want to or not,
although I read it to you now with rage deep in my heart.”

“The edict has arrived and this is what it has to say:
no priest or married man in Talavera situated
may keep a married woman or single girl as concubine;
and whosoever keeps one will be excommunicated.”

The clergy left the address stiffened and blanched.

A group decided to draft a resolution of protest the very next day. They would appeal to the King in opposition to the Pope. The Archpriest reasoned:

Although we’re clergymen, we are his subjects by our birth,
and we have served him well, always been loyal in his eyes.
Besides, the King knows very well that we’re all carnal men.
Believe me, with such troubles as we have he’ll sympathize!

He announced that he would renounce his holy orders before he would accept celibacy. Scarcely able to believe what the Pope had written, the Archpriest in grief echoed the Pope’s letter:

I call upon the Apostles and all those more worthy still,
with strong insistence, in such manner as our God well knows,
with eyes brimful of tears and with much sadness in my voice:
truly it is necessary for us to give up sweet pussy!

Great commotion seized the congregation of priests. The clergy’s treasurer sang praises of his Teresa:

How many times she causes ardent passions to subside!
And if I send her off, deep grief will never leave my side.

He declared that he was as dedicated to his Teresa as Floris was to Blanchefleur and Tristan was to Isuelt. He also threatened physical violence against the Archbishop of Toledo. Choirmaster Sancho Muñoz added that God has forgiven the clergy’s crimes of sexual intimacy. He further explained that he keeps a maiden who is an orphan. He noted the clergy’s service to orphans and widows, and sarcastically exclaimed:

Then let’s abandon our good women! We can turn to whores!

No man should have to resort to a whore. But many men have resorted to whores through the ages. A related poem observed that the pope ordered “peasants to work, soldiers to fight, and above all clergy to love {laborare rusticos, milites pugnare / jussit, at praecipue clericos amare}.”[4] How can clergy love under a mandate of celibacy? 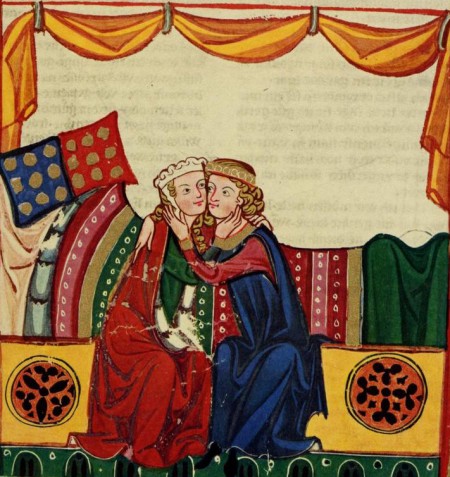 The complaints of the Talavera clergy are included only in the Salamanca manuscript, one of only three manuscripts of the Libro de buen amor that have survived. In twelfth-century Europe, the first and second Lateran Councils required priests, deacons, and sub-deacons to be celibate. The early historical significance of April 1, as indicated here, is not well-recognized. On the importance of the Talavera clergy’s protest for understanding Libro de buen amor, Márquez Villanueva (2012) pp. 27-33.

[2] Id. s. 1700. Daly translates 1700d as “We must abandon Pussy: just because she’s sweet, she goes.” Daly has the text Nobis enim dimittere quon iam süave. Above I use the word quoniam for a simpler representation. Another version of the text is nobis est dimittere quoniam suave. Marchand (1999) p. 45, adapting slightly the reading of Raymond S. Willis. Marchand observed:

Id. The Latin word quoniam is phonetically close to the Latin word cunnus, which means vagina. Vasvári (1984). With respect to Old French, quoniam could also be a pun for con {cunt} or qu’on y aime {in which one loves}. Marchand (1999) p. 44.

Juan Ruiz was drawing upon an existing parody of sacred scripture. The phrase quoniam suave appears in the Vulgate text for Psalm 134, verse 3 (Psalm 135 in RSV and similar translations). Simonatti (2003) n. 26; Wright (1841) p. 172. The phrase nobis est dimittere quoniam suave appears with a minor difference in the twelfth-century Latin poem About Priests’ Concubines {De Concubinis Sacerdotum} (wrongly attributed to Walter Map) v. 26. That poem expresses priests’ great love and need for their women and argues against denying priests the right to have a beloved woman-mate.

[3] Widows and orphans have historically been classes receiving special compassion and care. Prostitution, in contrast, has commonly been suppressed as a threat to good social order.

[4] The Priests’ Deliberation {Consultatio sacerdotum} (wrongly attributed to Walter Map) vv. 171-2, in Wright (1841) p. 179, my English translation. Consultatio sacerdotum, along with its companion pieces About the priests’ concubines {De Concubinis Sacerdotum} and About the priests’ convocation {De convocatione sacerdotum}, satirically present clergy arguing against celibacy. Here the poem engages in estate satire like in the medieval poem Richeut.