Saint Jerome was a leader in orienting his life toward women.  Of Jerome’s 123 surviving letters, 36% are addressed to women.  Jerome in his surviving letters addressed by name 20 different women.  Jerome’s letters to women have less diverse types and are more personal than his letters to men.[1]  In a scholarly letter to the learned woman Principia, Jerome stated that he was censured by many for writing to women and preferring women to men.[2]

Jerome closely associated with women.  In Rome, Jerome was frequently surrounded by women. Women and Jerome were comfortable discussing scripture and Christian living with each other.  Jerome observed of his relationship with women:

The patrician Roman women Fabiola, Paula, and Eustochium followed Jerome from Rome to Jerusalem. Jerome toured monasteries in Egypt with Paula in the winter of 386/6.[5]  Both Paula and Eustochium financially supported Jerome and lived next to him in Bethlehem. Jerome eulogized Lea, Blesilla, Fabiola, Paula, and Marcella after their deaths.[6]  They probably would have done the same for him. 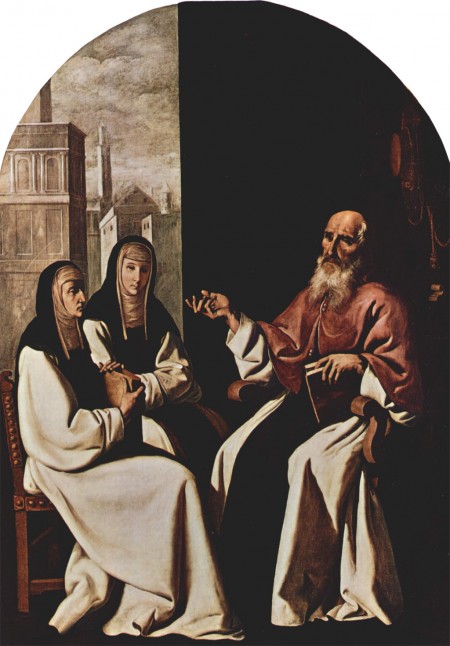 Because Jerome loved women, he told them what they needed to know, not what men thought women wanted to hear.  Jerome was far from the self-abasing, desperately love-seeking man of Roman love elegy.  Rather than keeping women ignorant, Jerome told women directly what men want.  Men debated among themselves about whether men should marry.  They assumed that women should marry.  Jerome, in contrast, strongly supported women not marrying.  Few men have cared as much for women as Jerome did.[7]  Only persons who don’t understand women and don’t truly love them cannot understand why women loved Jerome.

[1] See the summary statistics sheet in the Letters of Jerome Dataset.  Saint Jerome is also known as Jerome of Stridon and as Hieronymus.  His full Latin name is Eusebius Sophronius Hieronymus.

[2] Jerome, Letter 65 (to Principia, dated 397), from Latin trans. by Medieval Women’s Latin Letters.  In this letter, Jerome refers to women as the “weaker sex.” That was a conventional term associated with women’s less powerful physical stature and more powerful communication capabilities.  Jerome uses that conventional term in high rhetoric replete with irony.

Jerome uses a simpler presentation in his Letter 126.  Freemantle (1892), p. 601, describes that letter as addressed to “Marcellinus, a Roman official of high rank, and Anapsychia his wife.”  Jerome addresses the husband of high public rank and his wife equally as students of scripture:

Our reverend brother Oceanus to whom you desire an introduction is a great and good man and so learned in the law of the Lord that no words of mine are needed to make him able and willing to instruct you both and to explain to you in conformity with the rules which govern our common studies, my opinion and his on all questions arising out of the scriptures.  In conclusion, my truly holy lord and lady, may Christ our God by his almighty power have you in his safekeeping and cause you to live long and happily.

Considering Jerome’s otherwise prolific literary output and the size of his social network, his 123 extant letters are bound to represent only the tiniest fraction of all of the letters he wrote during his long career.

[7] Misrepresentations about Jerome’s relationship with women abound. Some accuse Jerome of being a misogynist. The same has long been claimed of Euripides, and with as little reason. Jerome reportedly was also set up for a false accusation of loving women sexually:

John Beleth tells, for instance, that they used a woman’s clothing to create a false impression of him. He got up one morning to go to matins, as was his custom, and found at his bedside a woman’s gown, which, thinking it was his own, he put on and so proceeded into the church. His adversaries, of course, had done this in order to make it look as if he had a woman in his room.