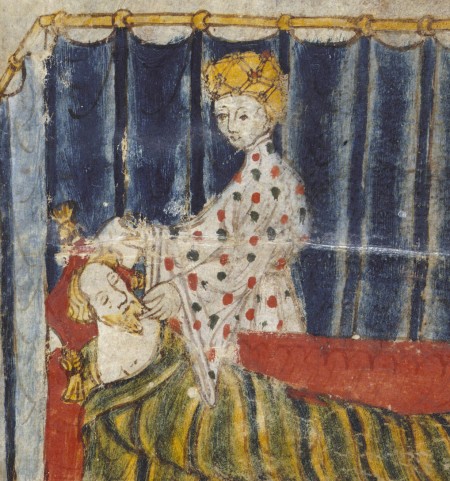 Sometimes your friends really aren’t looking out for your best interests. Especially if they’re married, and they’re urging you to marry. Do not marry {De coniuge non ducenda}, a Latin work of men’s sex protest written between 1225 and 1250, tells how three angels saved Gawain from marriage.

The married men who were Gawain’s friends didn’t act like angels. They instead sought company to the end of their miserable days. Gawain easily could have joined them:

And all these made wild,
by women that they used.
though I be now beguiled,
I think I might be excused.

I once had planned to take a wife
(to follow others’ wretched life),
a tender, juicy, winsome maid —
by her alone my heart was swayed.

Some friends advised me on the spot
to run and tie the nuptial knot
(“The married life’s the way for you!”),
to join me in their woeful crew.

My hasty wedding they did press
to cheer their gloom by my distress,
but through three angels all was well:
God snatched me from the gates of hell.

Gawain’s vigorous, celebrated knightly life could have ended with a lament like that of Matheolus in a Latin work of the late-thirteenth century:

Just as I, though sad, am less disturbed in marriage
Because my fellow husbands provide solace in their misery.
Oh, single life! Be sad that single life ends in sadness
Increased only because it is allowed to end.

What made all the difference was the appearance of three angels. Just as three angels appeared to Abraham at Mamre, so too three angels came to Gawain at Mamre.[4] Is anything too wonderful for the Lord?

One angel was Peter of Corbeil, elevated to archbishop of Sens in 1200. Courtly poets described abstractly men’s love servitude to women. Peter of Corbeil described the life of the ordinary, married working man:

Who takes a wife a millstone ties
around his neck until he dies.
The wife commands, the man obeys;
he once was free, but slave he stays.

His work piles up in rows and rows;
where one job ends, another grows.
The man’s an ass pricked on by spur
to feed the brats produced by her.

The second angel was Lawrence. He was probably the poet Lawrence, prior of Durham, who died in 1154. Lawrence explained how biological inequality in parental knowledge works to oppress men:

So rancour grips the married male
who keeps a wife who’s up for sale.
He names as heir another’s brat
and feeds what someone else begat.

Thus bitter grief and shame begin —
the child that’s been conceived in sin.
Its mother knows its bastard line,
the foolish husband says, “It’s mine.”

Under English common law, a child born within a marriage is indisputably presumed to be the husband’s responsibility. Thus a New York court in 1975 ruled that a prisoner was the father of four children his wife had while he was securely locked away from her in prison. The angel Lawrence proclaims, “Let Gawain therefore wife eschew {desistat igitur Gauinus nubere}!”

The third angel was John Chrysostom. Known in the ancient world as the golden-mouthed, with God’s grace he spoke harsh truth to men:

A married man’s a slave for sure,
His flesh and spirit pain endure —
Like ox from market homeward led
To work the plough until he’s dead.

A wife’s demands are always met;
If not, she’ll quarrel, rage and fret.
The noise defeats the patient spouse;
He yields to her and quits the house.

Is it any wonder that men’s lifespan is on average shorter than women’s? Some say that’s because men prefer to die than remain married. In truth, the matter hasn’t been seriously investigated. International authorities don’t care about gender inequality in lifespan that shortchanges men. The angel John advises, “If wise, then marriage you’ll forbear {uxorem igitur, si sapias, fugias}!”

Marriage is a foolish game in which a wife is entitled to swing a legal axe at her husband’s neck. There is no equal exchange under gynocentric law. When the axe strikes the husband’s neck, his head will be severed from his body. It will never re-attach. Gawain had magic that Merlin lacked. But magic didn’t save Gawain’s neck. Against the selfish advice of his married friends, the Holy Trinity of angels Peter, Lawrence, and John interceded on Gawain’s behalf. Give thanks and glory to them!

[1] Sir Gawain and the Green Knight ll. 2425-8, close translation from Middle English by Benson (2012) p. 179. Like the knight Gawain, the bookish scholar learned from experience of the superior wiles of women. The verse romance Sir Gawain and the Green Knight was probably written in the latter half of the fourteenth century. Surviving only in one manuscript (British Library MS Cotton Nero A.x.), it’s written in an English dialect associated with Cheshire (northwestern England). On Gawain’s relation to the literature of men’s sexed protest, Dove (1972).

[2] Do not marry {De coniuge non ducenda} I2-I4, Latin text (modified to classical orthography) and English translation from Rigg (1986) pp. 67-9. A Latin text is freely available online in Wright (1841) pp. 77-85. Another version of the Latin text is titled Golias on not getting married {Golias de conjuge non ducenda}. Golias was a common name for an imaginary rogue bishop. The poem allows for swapping the names Golias, Gawain, or perhaps another man getting married.

one nineteenth-century reader of De conjuge non ducenda (no. 83), one of Harley’s antifeminist diatribes, spoke for many when he scrawled above the title of the Latin text in a book at the Tulane University Library, “A brutal piece of Monkish foulness, worse than any Classical smittishness. Luther is here justified.”

Id. p. 141. Rigg (1986), in contrast, observes that De coniuge {conjuge} non ducenda is “a cheerful poem and not very serious.” The poem’s assertions:

Id. preface, p. 4. Men’s burdens historically have tended to be disparaged and depreciated.

[image] Wife of Bercilak de Hautedesert attempts to seduce Gawain in bed. Illumination detail from f. 125/129 recto from British Library MS Cotton Nero A.x, the only surviving manuscript of Sir Gawain and the Green Knight. Thanks to the Cotton Nero A.x. Project.