While men wrote most medieval European texts, most of those texts don’t reflect men’s self-consciousness as men. In the gynocentric society that characterizes humans and many other primates, men’s thinking about man and society fundamentally concerns what women want. Le Ménagier de Paris (The Householder of Paris), a book written in French about 1393, was intended to serve a wife. Yet it contains a poignant medieval husband’s fantasy of hardships of work, comforts from a wife, and forgiveness for adultery.

What the narrator wants appears poignantly in a particular evocation of a medieval husband’s fantasy. Providing instruction to his wife in case “you have another husband after me,” the narrator declares:

love your husband’s person carefully. I entreat you to see that he has clean linen, for that is your domain, while the concerns and troubles of men are those outside affairs they must handle, amidst coming and going, running here and there, in rain, wind, snow, and hail, sometimes drenched, sometimes dry, now sweating, now shivering, ill fed, ill lodged, ill shod, and poorly rested. Yet nothing represents a hardship for him, because the thought of his wife’s good care for him upon his return comforts him immensely. The ease, joys, and pleasures he knows she will provide for him herself, or have done for him in her presence, cheer him: removing his shoes in front of a good fire, washing his feet, offering clean shoes and socks, serving plenteous food and drink, respectfully honoring him. After this, she puts him to sleep in white sheets and his nightcap, covered with good furs, and satisfies him with other joys and amusements, intimacies, loves, and secrets about which I remain silent. The next day, she has set out fresh shirts and garments for him. [1]

Here instruction becomes fantasy as a man recalls hardships of his life. It is a medieval husband’s fantasy about the comforts of home. 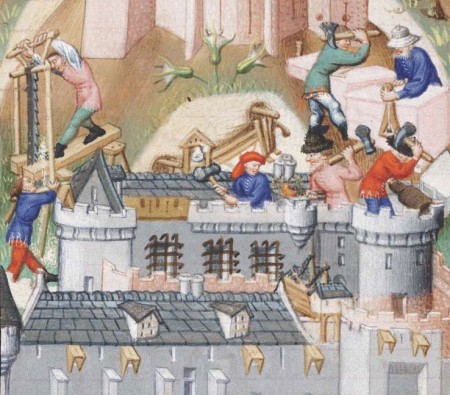 Hardships in medieval men’s lives were no fantasy. The fourteenth-century French allegory Le Chemin de Povreté et de Richesse (The Way of Poverty and Riches) begins with a newly married couple in bed. The wife was sleeping soundly. The husband was wide awake. A vision appeared to him of persons called Want, Necessity, Penury, and Scarcity. These personifications grabbed him and pummeled him. Then Disquiet, Worry, Distress, and Despair assailed him. Finally a saving lady came to him:

a most noble lady, gracious, upright, pleasant, and fair. She did not seem obstinate but rather gentle and humble toward all. Her body, comely and elegant, bore such noble adornments that surely marked her as a daughter of a king. [2]

She was Reason. Explaining love for her Father and His glorious Mother, the Seven Deadly Sins, and the Seven Works of Mercy, Reason instructed the husband about his salvation. Reason then kissed him and went deep inside him.

Explaining more concretely the value of hardships was a happy family. This family consisted of Good-Heart (the father), Good-Desire (the mother), and Intent-to Do-Well (their son). Good-Heart advised the husband, “you must work hard, sleep little, and stay awake.”[3] Good-Desire in turn advised him to use his time wisely and persevere in good deeds. The husband promised that he would strive to succeed.

The happy family led the husband to the Castle of Labor. There the husband found a mass workforce:

more than a hundred thousand workers toiled throughout the city, each one exerting himself at his designated task. No one was idle. This castle was so noisy with pounding and hammering that one would be hard-pressed to hear God’s thunder. [4]

Within the Castle of Labor the husband met Attention-to-Duty, Mindfulness, and the lady of the castle, Pain. Lady Pain instructed the husband:

perform your assignment gladly and skillfully, and concentrate on what is at hand without daydreaming. And no cheating! Rather, toil so that you sweat profusely by virtue of your exertion. No one should dare relax himself or take it easy here, or he would immediately be tossed out.

The husband diligently went to work:

I dove into my work, applying all my effort — mind and body. I labored like that without respite until bright daylight shone through the window, and then I blew out my candle. I continued to apply myself to my task, without seeking either quitting time or a break, until the breakfast hour — breakfast and dinner being one and the same according to the habit of laborers. … I abandoned myself to my tasks, from top to bottom. All in all, I never acted ineptly, and I worked so strenuously that when I heard the curfew, I rejoiced, because of weariness and weakness from the exertion

After the long workday, the husband was allowed to visit Repose. Known to be a deceitful man, Repose lived within the husband and wife’s home. The husband, who was prudently subservient to his wife, prayed that he get to “the demense of the grand lady Riches,” or at least to Sufficiency.

If he finds outside the family {step-family} a safe refuge and the help of a woman who welcomes him, taking care to warm him sitting with her by a little fire, to clean and mend his hose, breeches, shirts, and other clothing, subsequently he will follow her and desire her company, wanting to sleep and warm himself between her breasts. Thus will the child cast off his stepmother and stepfather, who beforehand paid no attention to him and now want to take him back and have him again. But that will not happen, for such a child now values more the company of this stranger who considers and cares for him than that of his relatives, who paid no heed to him [5]

Le Ménagier de Paris declares that loving care for an orphan boy and other animals is more powerful than women’s witchcraft:

They wail that the woman has bewitched their child and that because of this spell he cannot leave her, or be happy unless he stays with her. But whatever they say, it is not witchcraft; rather it is due to the love, the courtesies, the intimacies, joys, and pleasures that the woman has shared with him. On my soul, there is no other magic! Assuredly, if you show kindheartedness to a bear, a wolf, or a lion, that same bear, wolf, or lion will follow you.

Just as for an orphan boy, so too for a husband:

my dear, I urge you to bewitch and bewitch again your future husband, and protect him from holes in the roof and smokey fires, and do not quarrel with him, but be sweet, pleasant, and peaceful with him. Make certain that in winter he has a good fire without smoke, and let him slumber, warmly wrapped, cozy between your breasts, and in this way bewitch him. [6]

There’s no question about the narrator’s grasp of reality. Immediately after this description of bewitching, he describes in detail techniques for ridding a bedroom of fleas.

Le Ménagier de Paris imagines ideals of love in ordinary life. A wife cuckolded her husband. On her deathbed, she confessed that one of her three children wasn’t her husband’s child. Her confessor urged her to confess to her husband and beg his forgiveness. That she did. Before she got to the specifics, her husband interrupted her:

“Ho! ho! ho! say no more!” He then kissed her and pardoned her, chiding, “Never speak of this again, nor tell anyone else which of your children it may be, for I want to love them all equally, so that you will not be blamed either during your life or after your death. … Be silent; I do not wish to know any more. [7]

Echoing the story of the monk Abraham’s rescue of his beloved Mary from a brothel, Le Ménagier de Paris also tells of a wife who left her husband for another man. She eventually became a prostitute. Arranging circumstances so as to appear as if she were returning from a pilgrimage to the famous shrine of Santiago de Compostela, the husband invited and welcomed his wife back home.

In France in 1499, Pierre Gringore adapted and abridged Le Chemin de Povreté et de Richesse under the title Chasteau du Labour. Alexander Barclay translated Gringore’s version into English and Wynkyn de Worde printed it in England in 1506 as The Castell of Laboure. Id., Introductory Note, p. 177. On Wynkyn de Worde, see note [3] in my post on the prison of marriage.

On proverbial motivations for a man to leave his home, see Proverbs 19:13, 21:9, 27:15; Isaiah 9:18. In his twelfth-century treatise De miseria humane conditionis (On the misery of the the human condition), Lothario Dei Segni wrote:

There are three things which keep a man from staying home: smoke, a leaky roof, and a shrewish wife.