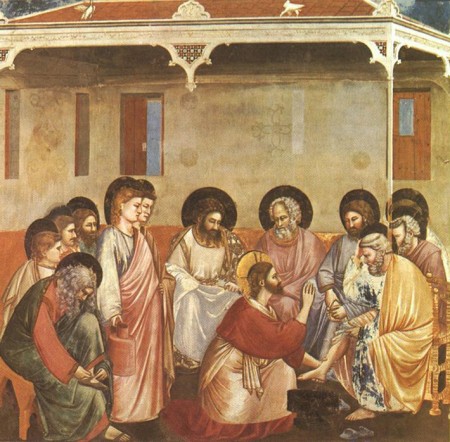 Jesus before the Passover meal preceding his execution washed the feet of his disciples. One disciple, Peter, the rock on which Jesus established his church, objected after Jesus had already washed others’ feet. Peter said to Jesus:

Jesus explained that accepting this service was necessary for Peter to be with Jesus. Peter then eagerly accepted.

The pseudepigraphical story Joseph and Aseneth includes a similar account of washing feet. Joseph and Aseneth rationalized the marriage of the Israelite Joseph to the idolatrous foreigner Aseneth, daughter of the Egyptian priest of On.[2] It explained that Aseneth renounced idolatry and turned to worshiping the one true Hebrew God of Joseph before she married Joseph. Joseph and Aseneth describes Aseneth as a strong, independent woman who hated men. But she fell in love with Joseph at first sight and repented her hostility toward him. Aseneth expressed her love for Joseph in part through washing his feet:

Aseneth said to him, “Come, my lord, come into my house;” and she took his right hand and brought him inside her house. And Joseph sat down on her father Pentephres’s seat, and she brought water to wash his feet; and Joseph said to her, “Let one of your virgins come, and let her wash my feet.” And Aseneth said to him, “No, my lord, for my hands are your hands, and your feet my feet, and no one else shall wash your feet;” and so she had her way and washed his feet. [3]

According to a recent study, Joseph and Aseneth is best understood as a Syriac Christian text of the late third or fourth centuries. Aseneth figures the Christian Church, and Joseph, Jesus.[4] The Church serving Jesus like Jesus served Peter expresses the unity of the Church and Jesus. That unity is expressed more specifically in Aseneth’s words, “my hands are your hands, and your feet my feet.”

The Aesop Romance parodies washing of feet as loving service. The philosopher Xanthus proposed to teach his slave Aesop a lesson. His wife eagerly agreed. She declared, “That’s what I’m praying for.” Xanthus told his wife:

Get up and take a basin over to his stranger as though you intended to wash his feet. From your appearance he’ll know that you’re the lady of the house and won’t let you do it but will say: “Lady, don’t you have any slave to wash my feet?” He’ll be shown up as a busybody, and Aesop will get a beating. [5]

The stranger was a rustic. Not wanting to be a busybody, he didn’t object to Xanthus’s wife washing his feet. The Aesop Romance most plausibly was written between the Gospel of John and Joseph and Aseneth. It engages in implicit critique of a wide range of authoritative literature.[6] That critique may have encompassed the Gospel of John.[7] In any case, the Aesop Romance suggests that washing of feet as loving service was a well-established motif in common culture in the early centuries of Christianity.

[7] In the Aesop Romance, the attempt to show the rustic to be a busybody culminates in a proposed execution: the immolation of Aesop’s wife. That’s another possible parodic connection to Jesus washing his disciples’ feet at his final Passover dinner. In addition, Aesop elsewhere states:

And what is there that is bad which does not come about through the tongue. It is because of the tongue that there are enmity, plots, battles, rivalry, strife, wars.