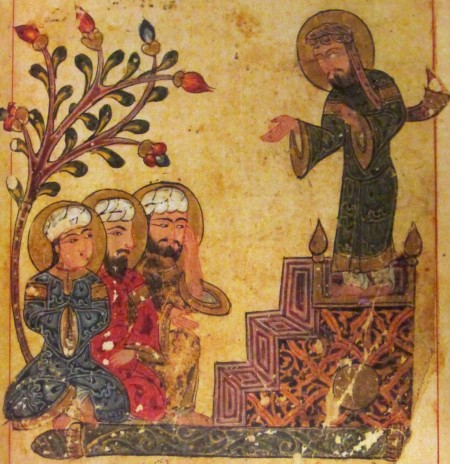 Borzuya studied ancient medical writings as he considered his future as a physician.  He perceived before himself a choice:

I had to choose, as it appeared to me, between four things, which in general occupy the attention and engage the affections of men: acquiring material wealth, gaining a good name, enjoying worldly pleasures, and earning rewards in the afterlife.  I found in the medical writings that the best doctor seeks with dedication to his profession only rewards in the afterlife.  I determined likewise to persevere in my profession so that I would not be like the merchant who sold a precious ruby for a worthless imitation pearl. [1]

Among the four gospels, Matthew’s Gospel alone contains a parable of a pearl:

the kingdom of heaven is like a merchant in search of fine pearls, who on finding one pearl of great value, went and sold all he had and bought it. [2]

Immediately following Borzuya’s parable of the ruby is an authoritative assurance.  Borzuya wrote:

I found moreover in the books of the ancients that, although the physician in his practice looks chiefly to rewards in the afterlife, he does not lose his share of worldly goods. [3]

What sort of written authority would assure a physician that dedication to rewards in the afterlife would not imply worldly sacrifices, or at least not unendurable worldly sacrifices?  Matthew’s Gospel provides such authoritative assurance:

In Borzuya’s autobiography, immediately following the assurance of worldly needs being met is another parable:

he {the physician who looks chiefly to reward in the afterlife} is like the farmer who sowed his land only for a crop of corn, yet after the harvest was over, found that the land also provided grass. [5]

Among the four gospels, Matthew’s Gospel alone provides a parable of weeds:

The kingdom of heaven may be compared to a man who sowed good seed in his field; but while men were sleeping, his enemy came and sowed weeds among the wheat, and went away. So when the plants came up and bore grain, then the weeds appeared also. And the servants of the householder came and said to him, “Sir, did you not sow good seed in your field? How then has it weeds?” He said to them, “An enemy has done this.” The servants said to him, “Then do you want us to go and gather them?” But he said, “No; lest in gathering the weeds you root up the wheat along with them. Let both grow together until the harvest; and at harvest time I will tell the reapers, ‘Gather the weeds first and bind them in bundles to be burned, but gather the wheat into my barn.'” [6]

In Matthew’s Gospel, the weeds parable appears near to the pearl parable.  Just as Borzuya’s ruby parable does for Matthew’s pearl parable, Borzuya’s grass parable values differently elements of Matthew’s weeds parable.  In Borzuya’s parable, the land produces crops and grass.  That’s not the work of an enemy.  The mixed harvest of crops and grass is an allegory for providential provision of worldly needs along with the harvest of goods for the afterlife.

Early manuscripts based on the Arabic Kalilah wa Dimnah include a chapter that almost surely quotes from Matthew’s Gospel.  The chapter recounts the story of the lioness and the jackal.  It contains this passage:

It has been said: ‘As you judge, you will be judged.’  As you, {lioness,} have judged and judgement has been meted out on you.  For every deed there is the fruit of the deed, reward or punishment, proportionate to the deed in greatness and smallness.  It is like seeds: When the sower has sown them the reaper pays him proportionately to what he has sown. [7]

A leading scholar of Kalilah wa Dimnah identified “As you judge, you will be judged” as a direct quotation from Matthew 7:2.[8]  Other biblical references apparently exist in the above passage and elsewhere in this chapter.[9]  Unlike ten chapters of Kalilah wa Dimnah with Indian or Middle Persian sources, this chapter does not celebrate ego-serving instrumental cleverness and deceit.  That has been put forward as an argument against it being in the book that Borzuya originally produced.[10]  On the other hand, this chapter advocates vegetarianism, asceticism, and piety.  The latter two practices clearly interested Borzuya.  Drawing upon Matthew’s Gospel further connects this chapter and Borzuya’s autobiography.

Then a thought occurred to me, and I brought to mind that which was spoken by the divine Word: “Though ye do all manner of good, say ‘we are unprofitable servants,’ ” and I was terrified by that which was spoken: “Bind him hand and foot, and cast him into outer darkness.” [11]

The Christian cleric also added to Borzuya’s autobiography the phrase “weeping and gnashing of teeth.” That phrase occurs in six times in Matthew’s Gospel, and only once elsewhere in the Bible.[12]  He represented Borzuya turning to piety through Biblical language:

I became a stranger to the seat of sinners, loved quietness, delighted in good things, aspired to virtue, and chose a seat with the excellent.  They stand in awe of death, tremble at the punishment of hell, and shrink from ignominy.  But they do not tremble at any earthly prince, for  water cannot drown, nor fire burn, nor vipers sting them. [13]

The kernel of that passage exists in Matthew’s Gospel.  It also exists in Borzuya’s autobiography transmitted through non-Christian contexts.[14]  The Christian cleric’s translation added more specific references to the Bible, particularly Matthew’s Gospel, but without greatly distorting ideas and themes already existing in Borzuya’s autobiography.

{Borzuya} is represented as a model christian monk. Long discourses on the Christian virtues are introduced. {Borzuya} sees in a vision paradise, the Virgin Mary, the angels and all the saints of God. This vision is described in hexameters and is illustrated by miniatures. [15]

Borzuya in some respects is similar to Galen.  Both Galen and Borzuya came from wealthy families and had fathers who arranged for them outstanding scholarly educations.  Both served powerful rulers as physicians and provided medical care to others with little concern for earning wealth.[17]  While Galen honored Greco-Roman gods and Borzuya came from a Zoroastrian family, both of their lives are amenable to Christian interpretation.  Galen glorified divine creation of living organisms and acted as a missionary much like Paul of Tarsus.[18]  Borzuya’s autobiography shares central themes with Augustine’s Confessions.

While surviving Christian-authored texts across more than a millennium exalt Galen as a physician, Galen has major flaws as a Christian personality.  Galen was egotistical and pugnacious.  He showed little charity toward his fellow physicians, and none for his enemies.  Galen, moreover, had great pride in his medical knowledge.  Galen favorite words in his writings were “firmly” and “accurately.”[19]

Unlike Galen, Borzuya exhibited Christian virtues of charity and humility.  Borzuya was concerned about his own soul, not his status relative to physician-competitors.  Borzuya wrote:

I did not envy any of my colleagues who had the same knowledge as I, but surpassed me in prestige and wealth, and yet in words and works lacked probity and good conduct.[20]

Borzuya described medical knowledge as having limited value and being inferior to other knowledge:

I thought about medicine and realised that a physician cannot give his patient a remedy which would heal his disease to such a degree that he would never again suffer from it, or from any other illness.  Seeing that there is no guarantee against the same disease, or an even more serious one from recurring, I come to the conclusion that knowledge of the hereafter is the only thing which brings permanent salvation from all diseases. [21]

Borzuya’s translation Kalilah wa Dimnah became widely known around the world.  Borzuya apparently also worked on a personal translation of Matthew’s Gospel.  The success of that fascinating work is beyond worldly judgment.

[6] Matthew 13:24-30.  The parable of the weeds is one of the few parables that Jesus explained to his disciples.  Matthew 13:36-43.  Borzuya’s autobiography ends with an explained parable.  So too does the separate account of Borzuya’s journey to India.

[7] Trans. Blois (1990) p. 36.  The three characters in the story are the lioness, the jackal, and the horseman, also called the archer.  Blois refers to the story as the story of the lioness and the horseman. Irving (1980) entitles the chapter, “The Chapter of the Archer and the Lioness.”  That translation, id. p. 185, somewhat obscures the Biblical quotation, but notes, “This may be a Christian element.  Cf. Matthew VII:2.”  Id. p. 201, n. 2.  The earliest surviving reference in Arabic to Kalilah wa Dimnah is from the early tenth century.  That reference lists the story of the lioness and the jackal (horseman) as part of the contents of Kalilah wa Dimnah.  Keith-Falconer (1885), intro., p. xix, n. 1 (referring to the history of ibn Wadith).  Blois (1990) p. 15 says the story is “not attested in India.”  Keith-Falconer (1885) p. xxxiii, in contrast, declares, “There can be no doubt that it is of Indian and Buddhist origin.”

[9] Id. perceives an allusion to Galatians 6:7 (“you reap whatever you sow”) and notes that the Bible frequently associates punishment and reward with fruit of a plant, e.g. Jeremiah 21:14.  The chapter also includes a reference to the Golden Rule, e.g. Matthew 7:12.  The Golden Rule in some form is common across religions.  Yet that reference contributes to the density of plausible references to Matthew’s Gospel.  Id., p. 37, states that the author of this chapter was “quite familiar with the Bible.” Another chapter included in early manuscripts based on the Arabic Kalilah wa Dimnah is “the ascetic and his guest” (alternatively, “the hermit and his guest”). In that story, the ascetic knows Hebrew.  The guest finds the sound of the Hebrew language fascinating and pleasing, and seeks to learn it.  Just as for the chapter on the lioness and the jackal, when the chapter on the ascetic and the guest was included in Kalilah wa Dimnah is unclear.

I perceived that for him who is addicted to carnal pleasures, who departs from this world in the midst of luxurious ease, and sells the bliss to come for dishonest pleasures, very evil things are reserved, namely, the terrible merciless Judgement, the ceaseless weeping and gnashing of teeth, and the fire which feeds not on wood and cannot be quenched, the worm that dies not, and the shame which passes not away.

[16] A Syriac translation thought to be from the sixth century has survived, but apparently only in part (it doesn’t contain Borzuya’s autobiography).  Id. pp. xlii-lvi.

[18] Hunayn ibn Ishaq, a Christian and a leading physician in ninth-century Baghdad, presented himself as a Christian-Galenic disciple.

Hägg, Tomas, and Bo Utas. 2003. The virgin and her lover: fragments of an ancient Greek novel and a Persian epic poem. Leiden: Brill.

Irving, Thomas Ballantine, trans. 1980. Kalilah and Dimnah: an English version of Bidpai’s fables based upon ancient Arabic and Spanish manuscripts. Newark, Del: Juan de la Cuesta. {this translation unfortunately includes neither the introductory chapter by ibn al-Muqaffa, nor the account of Borzuya’s voyage to India, nor Borzuya’s autobiography}

Keith-Falconer, I. G. N, ed. and trans. 1885.  Kalilah and Dimnah: or, The Fables of Bidpai: being an account of their literary history. Cambridge: University Press.