From nearly the beginning of the Roman Empire, story-tellers told of a quarrel between the fabulist Aesop and the philosopher Xanthus. Philosophers, also known as sophists, were by this time the most powerful figures in Greco-Roman culture. The quarrel between Aesop and Xanthus became the popular work now known as the Aesop Romance. Story-telling today is widely recognized as a powerful cultural practice. The relation of Aesop’s quarrel with Xanthus to the cultural authority of story-telling hasn’t yet been adequately appreciated.

The story-telling author of the Aesop Romance seems to have learned from Plato. One of Plato’s most brilliant ideas was to instigate a quarrel between philosophy and poetry.[1] Goddesses residing on Mount Parnassus represented poetry. Athenian city officialdom regularly staged major festivals of dramatic poetry. Philosophy, in contrast, mattered relatively little. Philosophy probably reached its pinnacle of public recognition in fifth-century Athens when the comic poet Aristophanes lampooned Socrates and his silly school of philosophy.[2] Promoting a public quarrel between philosophy and poetry raised lowly philosophy to the august heights of poetry. The Aesop Romance worked similarly for story-telling in relation to philosophy at a time when philosophy had leading cultural authority.[3]

The Aesop Romance begins with Aesop at the bottom of the Greco-Roman status hierarchy. Aesop was a slave born in a foreign land. Slave and foreign were two marks of low status. Aesop also was ugly:

Aesop was put to work digging in a field outside the city. Working outside the home and outside the city marked him as the lowest among the lowly slaves. Even worse, Aesop lacked capacity for speech. In Greco-Roman culture, not being able to speak made a man no better than a beast.

Aesop showed the power of story-telling even before he gained the ability to speak. Aesop’s master had a bowel of figs. Other slaves ate all the master’s figs. When the master saw that all his figs had vanished, he inquired into the matter. The other slaves blamed Aesop. Aesop, because he couldn’t speak, couldn’t argue his own case. But he drank some warm water, stuck his finger down his throat, and threw up all that was in his stomach. The contents of his stomach were only water. The master ordered the other slaves to do likewise. Their vomit contained remnants of figs. The only possible story that could explain the contents of their stomachs was that they, not Aesop, had eaten the master’s figs.[5] 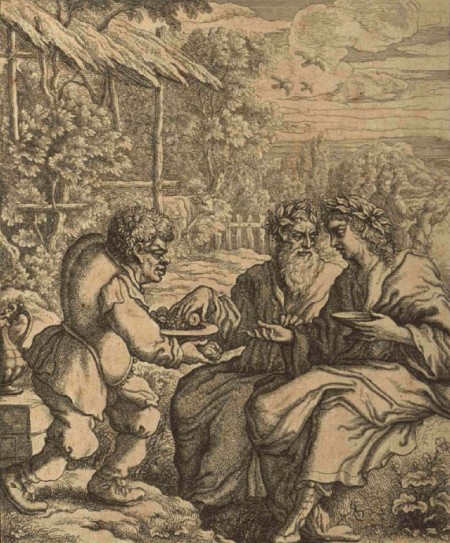 Aesop gained the ability to speak through the well-established story of benefiting from kindness to strangers. A priestess of Isis, passing by the field in which Aesop was working, asked him for directions. Aesop took her by the hand, led her to a grove, and gave her food and drink. Then he took her to the main road. In return for his hospitality, the priestess prayed to Isis to give Aesop the ability to speak. Isis and her nine Muses gave Aesop the power of speech, and more:

They conferred on him the power to devise stories and the ability to conceive and elaborate tales in Greek. [6]

When the Aesop Romance was first written, fables attributed to Aesop had already been circulating for centuries.[7] The Aesop Romance is about the cultural status of such story-telling.

Impressed with Aesop’s responses to questions, the philosopher Xanthus purchased him. Xanthus’s wife had told him to purchase a slave for her. Xanthus’s wife, who was carried about in a litter, dominated Xanthus even though he taught his students “one shouldn’t pay attention to a woman.”[8] Further undermining the cultural authority of philosophy, Xanthus praised the dancing of pantomimes:

Gentlemen and scholars, you must not think that philosophy consists only in what can be put in words. Philosophy is also in acts. Indeed, unspoken philosophy often surpasses that which is expressed in words. You can observe this in the case of dancers, how by the movement of their hands the continued motions themselves express an unspoken philosophy. [9]

Pantomime dancers provided mass entertainment. Xanthus’s subservience to his wife and admiration for pantomimes are blows to his philosophic prestige. Xanthus’s slave Aesop delivered many more such blows.

The Aesop Romance provides an early example of the philological-bureaucratic skill of working to rule. Angered by Xanthus’s bothersome commands, Aesop resolved to himself: “I’ll give this philosopher a lesson in how to give orders.”[10] Xanthus asked Aesop to bring the oil flask and towels to him at the bath in the city. Persons in the ancient world commonly anointed themselves with oil after a bath. Aesop brought the flask without filling it with oil, because Xanthus had said, “oil flask,” not “flask with oil.” When Xanthus commanded Aesop to cook lentil for dinner, Aesop cooked a single lentil. When Xanthus commanded Aesop to bring food “to her who loves me,” Aesop brought food to Xanthus’s female dog rather than to his wife. Aesop similarly engaged in deliberate mis-communication with others. In doing so, he highlighted the maddening silliness of verbal sophistication.

Xanthus’s students praised Aesop’s answer and told Xanthus that Aesop was right and he was wrong. The students then went home and from their tongue dinner suffered diarrhea all night long.

Aesop more subtly ridiculed philosophy in proving that one of Aesop’s students was a busybody. Aesop set out to prove that the student was a busybody by showing, for implicit comparison, a man who was not a busybody. That’s a parody of indirect proof: demonstrating that a person is not a non-busybody, and hence must be a busybody. The proof succeeds with a rustic unconcerned about anything. When Xanthus pretends to prepare to immolate his own wife, sure that the rustic would chivalrously intervene to protect the woman, the rustic urged Xanthus to wait. The rustic said that he wanted to fetch his wife so that Xanthus could burn both wives. Xanthus then stopped and conceded defeat. The rustic thus verbally triumphed over gynocentrism and the hypocritical philosopher.[12]

Aesop’s power as a story-teller ultimately didn’t save him from his foolish behavior. At Delphi, persons who heard him give a speaking exhibition didn’t reward him with gifts. Aesop in response insulted them and their city. To strike back at Aesop, the Delphians hid a temple cup in his baggage. They then uncovered it and falsely accused him of temple theft.[13] Aesop told stories to try to dissuade the Delphians from executing him for theft and blasphemy. But Aesop’s story-telling failed. He was forced to jump off a cliff.

The fame of Aesop and modern appreciation for story-telling ignores the end of the story: Aesop dead at the bottom of a cliff. In our world, story-telling has triumphed over philosophy. But if you believe the story of the Aesop Romance, poetic justice will prevail in the end.

[1] Declared explicitly in Plato, Republic X, 607b-c. For relevant discussion, see the Stanford Encyclopedia of Philosophy and Most (2011).

[3] Gibbs (2009) describes Aesop as an “anti-philosopher” and a “wise fool.” Aesop in the Aesop Romance seems to me to have a more specific position than the generic folk-type “wise fool.” Kurke (2010), in contrast, describes the complex relationship of the Aesop Romance to a wide range of classical Greek literature. One strand of Kurke’s account is understanding the Aesop Romance as a popular critique of elitist practices. My approach here provides a simpler view of the Aesop Romance in the context of strategically instigated quarrels between philosophy and poetry, and then story-telling and philosophy. This account encompasses three millennia of literature from ancient Greek poetry to story-telling today.

[4] Aesop Romance (The Book of Xanthus the Philosopher and Aesop his Slave or the Career of Aesop) 1, from Greek trans. Lloyd W. Daly in Hansen (1998) p. 111. All subsequent quotes from the Aesop Romance are from Daly’s translation in id. The Aesop Romance (Vita Aesopi), which dates from about the time of Jesus, became highly popular through to the twentieth century. It has a diverse, complex manuscript corpus. Daly’s translation is based on the manuscript stem Vita G (Perriana), supplemented (indicated by brackets) with text from Vita W (Westermanniana).  The characterization of Aesop as an ugly, foreign slave goes back at least to the fifth-century BGC. Kurke (2010) pp. 3, 41.

[11] Aesop Romance 53, id. p. 134. Note the continual addition of superlatives in describing the request. Being able to speak eloquently was highly valued in the Roman Empire. The claim that the tongue is both the best and worse portion occurs in the Seven Sages tradition. Plutarch was fond of this claim. He quotes it, among other places, in his Banquet of the Seven Sages, Ch. 2, 147f. For discussion, Kurke (2010) pp. 218-22. Kurke describes the murals of the Seven Sages at Ostia as an Aesopic parody without Aesop. Id. p. 236, discussed pp. 229-36.

Barlow, Francis, with Aphra Behn, Thomas Philipot, Robert Codrington and Thomas Dudley. 1687. Æsop’s fables with his life in English, French and Latin. London: Printed by H. Hills, Jun., for Francis Barlow, and are to be sold by Chr. Wilkinson … Tho. Fox … and Henry Faithorne. (online, 64 MB pdf)