Consent to hear me as I plead,
That I may, of your joys serene,
Compose a poem that will be
Worthy of serving thee.

I’ll sing of all your happiness,
Entreating ever, nonetheless —
a sinner base —
That my great sins, which I confess,
You will not ponder on, but stress
Only my praise. [1]

Praise for women cannot make up for men’s pervasively professed sins.  Women’s needs aren’t being met.  Happy wife, happy life.  Men, like a woodpecker dazed after a hard day’s work, can barely perceive where to fly.  Men need to ask for directions.  The medieval French social-scientific treatise Les Quinze joyes de mariage (The 15 Joys of Marriage) provides directions.[2]  That work is even more important today than it was for medieval men. 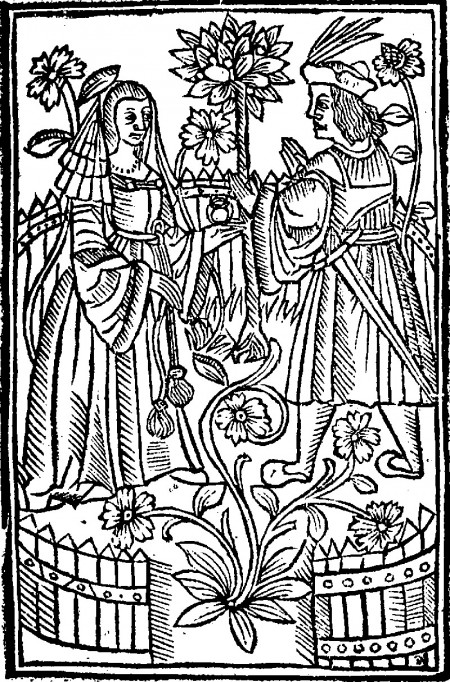 Les Quinze joyes de mariage begins with a topical review of the leading scholarly literature of its day.  Scholars, who were overwhelmingly men, reasoned about liberty and happiness without explicit reference to central circumstances of most men’s lives:

Many have toiled and strained, invoking both logic and authorities to show that a man can find greater earthly happiness by living untrammeled and free than by enslaving himself of his own will.  They agree that only a doltish man living joyously and sensually in the freedom of youth would, of his own volition and initiative, and quite unnecessarily, seek out the entrance of a confining, sorrowful, and tearful prison, and force his way inside; for once he’s there, the prison’s iron doors are slammed shut behind him and secured with heavy crossbars, and he’s so closely kept that by no means, whether by bribes or prayers, can he escape.  Now this fellow seems all the more dim-witted to have imprisoned himself since he’d heard beforehand, from within the jailhouse walls, the crying and moaning of its inmates. [3]

This author then reviews the heroic French male warriors who refused to submit to the Roman Empire and summarizes Aristotelian wisdom (“every man must seek the golden mean”).  The point of this erudition emerges only with a mundane, practical illustration figuring an unwise man as a beast:

we would consider quite ill-advised a man who sought purposefully to fall into a pit wide at the bottom and narrow at the top, like those dug in forests to capture wild animals, and from which escape is impossible.  Now once he’s down inside this pit, he casts about for a way to get out, but by then it’s too late.  So, too, with those about to marry [4]

The imaginary scholar Valerius is a character in an important work in the literature of men’s sexed protests.[5] Les Quinze joyes de mariage cites him as having provided useful Socratic instruction:

a certain scholar, Valerius, once spoke to a married friend, inquiring whether he thought he’d made a wise decision.  “Friend,” he asked, “wasn’t there any way out, even a high window from which you could’ve jumped headfirst into a deep river?”[6]

I don’t condemn them {men} for marrying; rather, I approve and consider that they’re doing the right thing.  After all, we’re only born into this world to do penance, suffer affliction, and mortify the flesh so as to win Paradise, and it seems to me that a fellow could find no harsher penance than submission to the pains and torments described below.  Yet there’s another side to this: since they reckon these torments as joys and delights, and become as calloused to them as an ass to its burden, they seem perfectly content; thus one wonders whether in their case this form of penance has any real merit.

The prologue to Les Quinze joyes de mariage ends with muddled, ineffectual argument and a sign of the direction forward:

Now I’ve consumed time, ink, and paper for the sake of others yet unmarried, and surely won’t dissuade them from entering the net, nor is that my intention.  Yet perhaps a few will come to regret their decision when it’s too late, thus they’ll have these joys forever, till the end of their miserable days.

Appreciation of this superb, subtle humor benefits from careful study of Solomon and Marcolf.  The fifteen central chapters of Les Quinze joyes de mariage all end with the phrase “till the end of his miserable days.”[7] That medieval finding that should be remembered to the end of life, liberty, and the pursuit of happiness.

Meanwhile, men will continue to pursue their interests.  The author of Les Quinze joyes de mariage concludes with an appeal to women:

Now I’ve written this {Les Quinze joyes de mariage} at the request of certain ladies; if they’re unsatisfied and want me to apply myself to write in their behalf, in their favor, to the detriment of men, and from a feminine point of view, then I’m their man!  Indeed, I’d have a lot better stuff than this considering the great wrongs, woes, and injustices that men heap on women everywhere and in general, both groundlessly and by superior force — after all, women are naturally weak and defenseless, inclining always to serve and obey.  If this weren’t so, men wouldn’t know how to live, nor could they even survive. [8]

In other words, men are naturally even weaker and more defenseless than women, because without women, men wouldn’t know how to live and couldn’t survive.[9]  Don’t try to reason through this.  Men, praise women and confess your sins, till the end of your miserable days.

[2] Pitts (1985) provide a close, modern English translation of Les Quinze joyes de mariage.  It’s thought to have been written about 1400. Here’s a nineteenth-century printing of Les Quinze joyes de mariage and the first two joys of marriage in an alternate, modern English translation.  The first known English translation was printed by Wynkyn de Worde {sic} in 1509.  It was an adaptation in verse and entitled The fyftene Joyes of maryage.  For analysis, Coldiron (2009) Ch. 4. Another English translation by Thomas Dekker, entitled The Batchelars Banquet, was printed twice in 1603 and again in 1604.  It was reprinted a total of ten times before 1700, making it “one of the non-dramatic bestsellers of the Elizabethan period.” Gildenhuys (1993) p. 13.  Another translation, entitled The xv. Comforts of Rash and Inconsiderate Marriage (running title, The fifteen Comforts of Matrimony) was printed in 1682.  Wilson (1929) provides a scholarly edition of The Batchelars Banquet, and Gildenhuys (1993), an edition with modernized spelling.  The Batchelars Banquet adapts Les Quinze joyes de mariage considerably; it is not a close translation.

[4] The figure of a pit “wide at the bottom and narrow at the top” suggests in context a woman’s hips and waist.

[5] Dissuasio Valerii ad Ruffinum philosophum ne uxorem ducat, attributed to Walter Map (c. 1180).  This popular work was ostensibly a letter from Valerius to Rufinus, who “Uxorari tendebat, non amari” (he was headed to be wived, not to be loved).  It apparently formed a chapter in a book that, in fourteenth-century England, “this jolly clerk Jankyn … always laughed uproariously” when reading.  See Chaucer, Canterbury Tales, The Prologue of the Wife of Bath’s Tale.

What! Postumus, are you, you who once had your wits, taking to yourself a wife? Tell me what Tisiphone, what snakes are driving you mad? Can you submit to a she-tyrant when there is so much rope to be had, so many dizzy heights of windows standing open, and when the Aemilian bridge offers itself to hand?

That paraphrase isn’t in the source text.

[9] The conclusion of Les Quinze joyes de mariage returns to the style and reasoning of its prologue.  Missing the subtle humor of such reasoning, Nykrog (1984), pp. 427-8, declares of the prologue:

the author is obviously a well-meaning bore, scholarly and pedantic, definitely not very intelligent, heavy-handed as a writer.  … By the time we reach his final philosophizing about whether the sufferings endured in marriage will ease the husband’s access to Paradise, considering that the sufferers seem to like it, we have become convinced that this man cannot be very bright.

This analysis seems to apply much more appropriately to much recent scholarship, although a male scholar would not dare say so about a female scholar’s work.  See Smith (1995).  In its introduction, Gildenhuys (1993) focuses on women.  Wilson (1929) pp. xiv-xv declares:

We are forced in fairness to remember the ruling of Robert Burton, that if women are bad men are worse, and to reflect that there may be more material for a maid’s banquet than for a bachelor’s; and the reflection, if it does not detract from our amusement, lessens the stature of the author as we realize that his work is not level with life.

That’s comical nonsense much like the carefully crafted, ridiculous prologue of Les Quinze joyes de mariage.  If you believe that Les Quinze joyes de mariage is misogynistic, you must believe that modern scholarship is even more misandristic.  Persons who disparage wildly creative literary work as being “not level with life” deserve bureaucratic jobs.

[image] Woodcut illustration preceding the first joy of marriage in The fyftene Joyes of maryage, printed in 1509.

Smith, Susan L. 1995. The power of women: a topos in medieval art and literature. Philadelphia: University of Pennsylvania Press.