In short comic tales in Old French verse from about the thirteenth century, ordinary women and men scheme and trick in usual human ways.  These fabliaux are usually comical within realistic plausibility.  The fabliau La Dame Escoilliee, in contrast, presents a medieval superhero in comic-book action. With extraordinary feats, this superhero defeats a particularly oppressive matriarchy in medieval life. 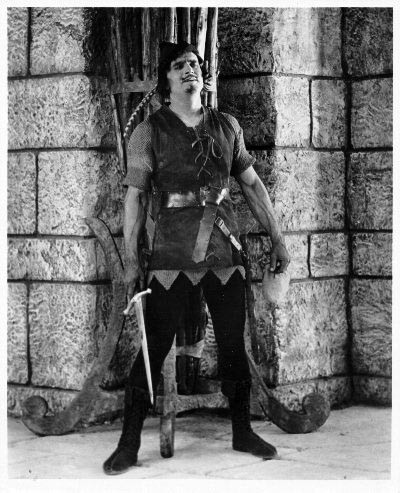 The fabliau opens with a scene of conventional betadom, which is just another way of describing matriarchy.  A rich, noble knight is having marital troubles:

because he so loved his wife,
he raised her even over him
and let her govern at her whim
all that he had. Household and lands,
he put it all in her hands,
which so debased him in her sight
and cheapened him that if the knight
said yes, she would say no instead [1]

The new applied game theory has conclusively established what this fabliau advised men nearly a millennium ago:

you ought not to carry out
whatever your wives bid you do;
they’ll only think the less of you.

Men, by nature and nurture, seek to please women.  Yet as we have learned in recent decades, human history is one long, sad story of men failing to please women effectively.  The medieval world, like our world today, yearns for a superhero to overturn male betadom and to make women happy with joyful, exuberant love.

La Dame Escoilliee describes a fantasy super-hero who establishes a new, fantasy world free from matriarchy.  The fabliau provides the usual romantic-epic motifs.  Hunting, thunder, lightning, nightfall.  A count and his companions seek shelter at the home of another noble.  That man mysteriously demurs: “I do not dare … I can’t.”  He is a lord, but one without will and person because of the dominance of his wife.  He explains:

I’m just a coat she wears for rain;
she does her will, but never mine.
If it’s my will, she will decline.

The first super-heroic act is subtle.  Simply through the count addressing this man with respect for his person, the man’s person is activated.  He realizes that he can will events in his household by stating the opposite.  He refuses the count lodgings.  His wife then invites the count in and gives him lodgings and a feast.  He refuses to have his daughter join them for the feast.  His wife then leads the daughter in.  The count falls in love with the daughter and asks for her hand in marriage.  The man refuses the count’s request for marriage.  His wife then gives the count their daughter’s hand.  The man has actually effected his true will.  Yet within his own home he is still deprived of the non-instrumental dignity and respect of a person.  The count, not yet recognized as a superhero, has more work to do.

The count subsequently establishes clearly his superhero credentials.  He orders two hounds to catch a hare before it crosses two fields.  The hounds get the hare after four fields.  That’s not good enough to satisfy a superhero.  The count strikes off their heads with a blow of his sword.  Shortly thereafter, with another blow of his sword, he cuts off the head of his horse.  Only an imaginary man could do such acts.

The count’s superhero status is also established geopolitically.  One of the count’s servants is described as a Moor.  When the count gives a command, “The Moor immediately obeyed.”  Moor in medieval Europe meant a dark-skilled Muslim from the rich, highly cultured, and powerful Muslim lands that extended for centuries from northern Africa to present-day Pakistan.  In thirteenth-century France, having Muslims as subservient people was a Christian superhero fantasy.

While imaginary, this superhero is nonetheless immersed in the details of his kitchen.  For the wedding feast of the count and the daughter, the count provides specific directions to his cook:

He summons his cook and confers
with him and lets him know what flavors
on this occasion he most favors
and with what highly seasoned sauces
to fête his people, …

Following her mother’s instructions, the daughter-bride subsequently enters the kitchen and tells the cook:

“See to it that there’s not one course
where garlic doesn’t dominate,
but lavish care on every plate.”
“I wouldn’t dare.” “You’ll do just this.
Be sure he won’t take it amiss
if he knows it was my desire;
and you must do as I require.
I can advance you or undo you.”

The daughter seeks to establish the normal household matriarchy under which most men live.  Whatever the wife desires, must be.  After all, an unhappy wife means an unhappy life.

The superhero count, however, is unafraid to stand up for his own preferred seasonings.  After the distasteful feast, he summons his cook for questioning.  The cook confesses that he doused all the dishes with garlic because he was afraid to defy the wife’s wishes.  That is not an acceptable excuse to the count.  The count plucks out the cook’s eye, cuts off his hand and ear, and exiles him, never to return.[2]  The count then beats his wife nearly to death.  But he keeps her within the home and takes care that she will heal.  As remains the case today, violence against men is more severe and more frequent than violence against women.  In this fabliau, as in life, violence against men is also less noticed.[3]  The wife repents her act and gives her word that she will not establish the normal matriarchy.  What subsequently happens to the cook isn’t mentioned.

Up to this point in the fabliau, the husband of the wife’s mother remains under jackbooted matriarchy.  But the superhero count steps in to perform an extraordinary fantasy feat.  The count orders his Moor to cut off a bull’s testicles and bring them to him.  The count then declares that he will physically emasculate the wife’s mother.  That action parallels her personal evisceration of her husband.  The count’s servants hold the lady down and expose her ass.  A servant cuts her buttocks and pretends to pull out the bull’s balls.  After the count threatens a cauterization to prevent the balls from growing back, the lady declares:

… Have mercy, lord!
In loyalty I give my word,
on relics I will gladly swear
against my lord never to dare
speak out, but serve him as is fit.
Yes, on my oath I promise it.

The count has mercy on the woman.  Her husband, like many men lacking appreciation for guile, believes the count’s tale of what happened.  So too have literally believed many scholars who have written about this fabliau.  All are solicitous for the welfare of the woman.  They bind her wounds and lovingly carry her home on a gurney.  Because she is rich, she has an excellent physician.  She recovers her health.  But now, when her husband says something, she agrees.  The superhero count has freed the husband from matriarchy.[4]

The superhero saved only one man.  The superhero and his fabliau acts do not represent reality.  Matriarchy endures.[5]  Unruly readers with a sense of humor at least have the pleasure of laughter.

[2] These are punishments in Hebrew and Christian scripture.

[3] Lacy (1993), p. 109, ignores the injuries to the male cook but notes “viciously slashing her thighs without benefit of anesthetic.”  After reading a fairy tale, such readers search for pixie dust in their backyards.

[4] Scholars have typically responded to the literature of men’s sexed protests with efforts to shame, silence, and subordinate men.  For example, consider this analysis of La Dame Escoilliee for the learned we:

Unless we happen to share the narrator’s misogyny, we are not likely to find this fabliau very funny or even very pleasant.  I confess that I do not {how daring!}; this text provides a severe test of scholarly detachment.  Nonetheless, the fact that we may find the subject repugnant should not prevent us from reading the work in its own terms and appreciating the construction of the tale

This scholar concludes his analysis of La Dame Escoilliee with a moderate and balanced consideration of antifeminism:

Critical circumspection is required here, and detailed analysis of individual texts must replace the sort of wholesale generalizations that fill many manuals. … In the fabliaux, we cannot expect to find feminist manifestos {how disappointing!} ….  But if it is a striking understatement to say that, in general, the authors of these works do not hold women in particularly high esteem, it is also true that, in some fabliaux, questions of antifeminism are simply irrelevant.  In others, poets simply take for granted traditional assumptions regarding the proper role or the nature of women … we should not assign {these fabliaux} to the same general category of “antifeminism” that we reserve for texts into which an author inserts categorical condemnations of women, or for those rare texts that present an unmistakable hatred of women behind a thin veil of humor.

Lacy (1993) pp. 67, 76-7.  That’s a literary judgment in the spirit of Mayor Peter Stockmann in Ibsen’s Enemy of the People.  It is of course preferable to R. Howard Bloch’s viciously misandristic invocations of misogyny. See, e.g., post on gender symmetry in love, note [4].

Here is the moral of this fabliau:
Cursed be the woman who hates men!

Trans. Lacy (1993), p. 110. That conclusion over-generalizes from matriarchy to misandry.  Id., following conventional lines of interpretation, declares that conclusion to be “a remarkable demonstration of tortured misogynist logic.”  Dubin (2013)’s translation of those two lines invokes God and makes the reason for cursing woman more misandristic:

Id. pp. 438-9. The effect is to deflect attention from matriarchy and misandry.