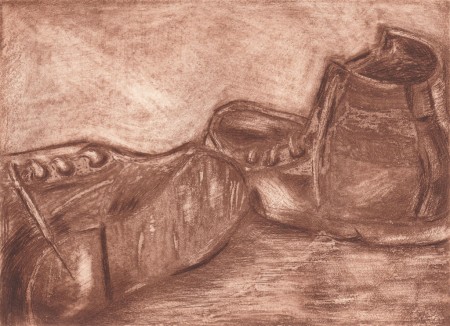 In twelfth-century Damascus, the physician Abū l-Hakam displayed his poetic virtuosity in a poem that encompasses lament, comedy, polemic and a vast range of technical knowledge.  Abū l-Hakam’s well-wrought poem is about badly made shoes.  Abū l-Hakam applied his erudition to mock the extensive learning of the Baghdadi scholar Ibn al-Salāh.  Ibn al-Salāh apparently was Abū l-Hakam’s friend and former student.[1]  This sort of poem is scarcely conceivable in today’s intellectual regime of tense, institutionalized authorities and strict disciplines.

The poem begins like a lament of lovesickness.  It’s a personal confession of passionate bewilderment:

My plight is bewildering and indescribable,
my case is strange to explain, O Abū l-Faḍl!
I’ll let you in to my misery and passionate feelings
and the humiliation I suffered in Damascus. [2]

Arriving in Damascus from Baghdad, the speaker Ibn al-Salāh is a conscientious scholar with an earthly problem much unlike courtly love:

I arrived there unaware of its affairs,
no matter how much I have been wary of ignorance.
I was wearing an old pair of shamshak shoes on my feet
to which treacherous Time had done its unpraiseworthy deed.

The shamshak shoes are literally the focus of the poem.  They apparently were a Baghdadi type of shoes, yet some puzzling philological-textual issues exist with the word shamshak.[3]  Perhaps that word is a play on a common name for Damascus, ash-Sham, unjoined and misglued.  Suffering from bad shamshak shoes in ash-Sham would be appropriate poetic comedy for the poem.

They contain a fault in a compound syllogism:
neither the conditional nor the categorical produce a conclusion.
Their transversal is not fitting that I should
protect my feet with it. Their shape ought not to exist!

Ibn al-Salāh steps through “numerous technical terms from the fields of logic, natural sciences, and geometry” in criticizing his new shoes.[4]  He comes to exclaim:

They baffled me, to the point that I became totally oblivious
and Saʿdān {the shoemaker} left me bereft of reason, my friend!
Yet, in all this it was clear that the man’s brains were cracked;
how despicable, a person lacking wits, of disordered mind!
And how quick to be ruined, a house from which comes what you can see among people,
and how worthy of humiliation and distress!

Speaking of the man with cracked brains, Ibn al-Salāh might as well be speaking of himself.[5]  The poem in part seems to be parodying Baghdad’s claims to intellectual and moral primacy over Damascus:

The leading scholars in this field have never ceased
to suffer what they should not, from ignorant people.
Therefore I, since I came to stay in Damascus,
regret it and am resolved to return to my family.
If I were in Baghdad, some generous and noble people
would be there to help me

Mocking a scholar from Baghdad probably would play well among patrons of poetry in Abū l-Hakam’s Damascus.

Playfulness, however, seems to trump Abū l-Hakam’s intellectual-material interests.  The poem concludes with a parody of claims of lovesickness unto death:

Because I suffered so badly from the narrow instep
I fear my whole body will be sick and waste away.
O, what a shamshak! As soon as I looked at its shape
I knew for certain that that it had to cause my death
And would give me an illness from which, I imagine,
neither herbs nor any decoction will save me.

Lovesickness was a popular topic for poetry.  It was also an ailment that physicians attempted to treat.  Abū l-Hakam was a poet and a physician.  Ibn Abī Usaybiʿah described Abū l-Hakam as:

distinguished in the philosophical sciences, well-versed in medicine, interested in literature and famous for his poetry. He was a good conversationalist, had a sense of humor, and loved parties and entertainment. [6]

As Abū l-Hakam’s poem on badly made shoes shows, he was an intellectual who didn’t merely pursue his own material interests.  He knew how to have fun.

[1] van Gelder (1995) p. 223, n. 33, observes that Abū l-Hakam and Ibn al-Salāh apparently were on good terms and that Abū l-Hakam taught Ibn al-Salāh in Baghdad.  According to Ibn Abī Usaybiʿah, Ibn al-Salāh had “profound and detailed knowledge in the philosophical sciences” and was a “distinguished physician.”  Ibn al-Salāh was Persian, while Abū l-Hakam originated from Murcia in Andalusia.  HP pp. 791, 805.  For an example of vicious scholarly relations in the ancient Islamic world, see the debate between Ibn Butlān and Ibn Ridwān on the relative warmth of the chick and the chicken.  An episode in that conflict was re-worked in Hebrew in the twelfth century in Ibn Zabara’s Book of Delight.

[2] From Arabic trans. van Gelder (forthcoming).  All subsequent quotes, unless otherwise noted, are from van Gelder’s prose translation of Abū l-Hakam’s poem on the badly made shoes.  Id. represents the Arabic line with paired lines of English text, with the second line in the pair indented.  For technical reasons I have not been able to preserve that indenting above.

[3] Id., note on shamshak.  The word shamshak occurs five times in Abū l-Hakam’s poem on badly made shoes.  If shamshak actually is a pun for Damascus, it’s a badly made pun.  Professor van Gelder has stated:

I don’t think our poet is making a pun on shamshak / al-Sham: in the first place,  in the poem he uses the form tamshak or rather tamashk (or else it does not scan correctly); secondly, al-Sham has a long a (or a short a followed by a glottal stop: al-Sha’m), and the paronomasia would not work in Arabic. One would rather think of a play on tamashk / Dimashq (Damascus), but this too would count as a somewhat feeble pun.

[5] A common tradesman confounds a learned man in a story in the Hebrew Sefer Hamusar, written about 1580.

Gelder, Geert Jan van. “Abū l-Ḥakam al-Maghrībī’s poem on the badly made shoes of Ibn al-Ṣalāḥ.”  Forthcoming in A Literary History of Medicine: “The Best Accounts of the Classes of Physicians” by Ibn Abī Uṣaybiʿah (d. 1270).  University of Oxford & University of Warwick.