About a millennium ago, Baghdad was probably the largest city on earth and arguably the center of the most advanced human civilization.  Elites in Baghdad viewed contemptuously low-status groups such as school teachers, weavers, and Bedouins.  Surviving classical Arabic texts disparage and ridicule “the common folks, the scum, the plebeians and the servile class.”[1]  But classical Arabic texts even more frequently disparage and ridicule the learned elite.[2]  Hypocrisy, affectation, solemnity, and self-interested rationalization are universal propensities of human intellectual development.  More ridicule of the learned indicates a higher state of intellectual development.

Linguistic style is a means for signifying group affiliation and class distinctions.  One classical Arabic text approvingly observes that a scholar avoided using Arabic words of Persian origin even when speaking Arabic to his cook.[3]  But another text transmitted the humorously didactic anecdote:

I once stopped at a carpenter’s, and asked, “What is the price that this pair of doors costeth?” He retorted, “Two pieces of shitteth, oh you idioteth.” Then I swore never to talk to a common man in an unfitting manner. [4]

This anecdote extends learning in decorum to addressing the common man.  In ordinary speaking, the elite apparently did not use classical Arabic “so as to avoid being classified as a tiresome and insufferable individual.”[5]  An alternative was to be self-consciously a learned clown like al-Haysa Baysa.

Social status and learning were ridiculed as excuses for rapaciousness.  A man who attempted to invoke his impeccable religious lineage was bluntly rebuffed from below:

A descendant of Ali {Ali ibn Abi Talib} smuggled a prostitute into his house. When he wanted {to have intercourse with} her, she said: “The money {first}!” He said: “Come off it, woe unto you; I am a relative of God’s Messenger, peace be upon him!” She replied: “Stop that! You should opt for the whores of Qumm; this won’t sell with the whores of Baghdad!” [6]

Another anecdote recounts the story of a professional Qur’an reader and a woman who paid him a loaf of bread to recite over her dead son’s grave:

The man recites: “The day when they will be pulled, faces downward, towards hellfire. Taste the touch of Hell!” {Quran 54:48}  Utterly indignant, the woman reproaches him that this is perhaps not precisely the appropriate passage for recital over a grave. The man answers: “Why, what do you expect for a loaf of bread? ‘Reclining on cushions with a brocaded trimming’?! {Quran 55:54} That costs a dirham!” [7]

Elite status that means little more than privileged access to sex and money gets reduced with ridicule.

Ridicule also serves to regulate bogus learning.  Religious scholars who pretended to know it all and proscribe on that basis were asked to give a legal opinion on a specific person’s genitals.[8]  Learning that can easily be mocked will be:

So one day, when {that pretensious religious thinker} asked him, “What do you say, may God bring you happiness, on the terminal point of the annihilation of delusions at the prime of closeness to the reaching of the final goals?”,  Husayn replied: “This is part of {the issue of} the existence of the closeness of conditionality in the manner of aspectuality, by which mutual negation and affinity take place with neither encounter nor separation.”  Then the man said: “This will require some consideration and deduction.” And he replied: “Just think it over, for we have found rest at last.” [9]

So it was in Baghdad about a millennium ago.  So it is today in other centers of civilization.  Ridiculing the learned isn’t just fun.  It’s a necessary aspect of intellectual development. 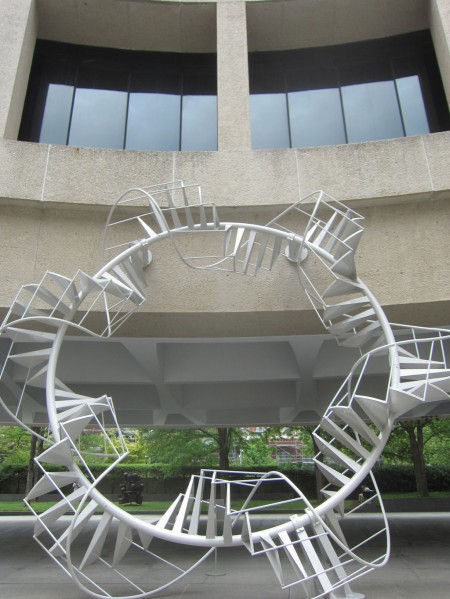 [image] My photograph of Peter Coffin, Untitled (Spiral Staircase) 2007, installed on the Hirshhorn Plaza through Oct. 6, 2013.