The magician Merlin was an important figure in the Arthurian romances that circulated widely in Europe from late in the twelfth century. Merlin, full of wisdom, prophecies, and magical arts, had a conspicuous lack. He lacked the seductive love magic to promote the charms of a magical sword that, thrust upon women, would bring them wondrous, life-giving blessings. So lacking in seductive love magic was the magician Merlin that he had to beg and barter for sex with women. Merlin’s abjection in love indicates more generally men’s love magic replaced in medieval culture with men’s love servitude. 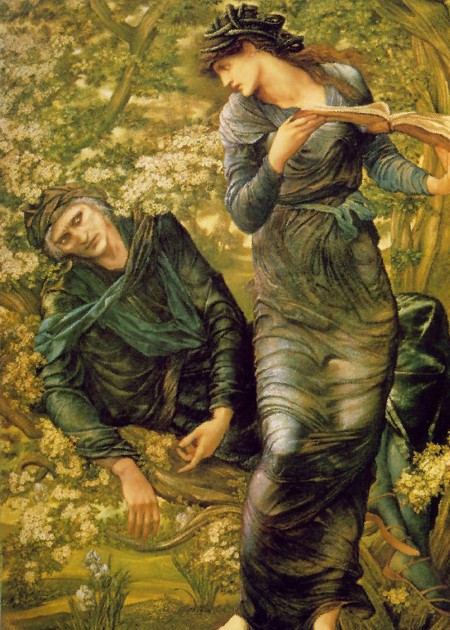 he was going to stay with his lady, and he would never have the power to leave her or to come and go as he wished. [1]

Viviane sought to control completely Merlin’s life. One day, she said to Merlin:

I beseech you to teach me how I might keep a man imprisoned within a tower or walls or irons through wizardry, so that he could never get away but through me.

Merlin was reluctant, but incapable of saying no:

I know full well what you are thinking, and I know that you want to keep me. And I am so overcome by love of you that I must do your will

Viviane put her arms around his neck and spoke to him about their love. Merlin, falsely believing that love means never saying no to a woman, taught her the imprisoning spell. She then used the spell on him. He became imprisoned in their love, while she was free:

Merlin never thereafter left the stronghold where his lady love had put him, but she came and went as she wished.

If Merlin appreciated seductive love magic, he would have already cast such a spell on Viviane.

While wizards of seduction employ dread game, Merlin lost love by being too eager to please and too needy in love. Merlin fell in love with the beautiful woman Morgan le Fay. Merlin told her:

There is nothing you could ask of me that I wouldn’t do if I could. [2]

Men presenting themselves as doormats for women dries up women’s love for them. That’s particularly damaging for men who have children, because when a relationship fails, men are much less likely than women to retain custody of their children. So it was for Merlin. He and Morgan had a son named Yvain. Yvain would grow up to be a famous knight. But Morgan soon threw Merlin out of their home and out of his son’s life:

She drove Merlin away from her, because she saw that he loved her madly, and she told him that she would have him tortured and killed if he came near her again.

Morgan soon began living with another man. They conspired to steal Excalibur, King Arthur’s magic sword. Morgan’s mistaken handling of the sword led to her new boyfriend being gravely injured. His plotting of revenge against her put her in mortal danger. Then Merlin saved her because still “he loved Morgan greatly.” That’s nice. But that’s not an effective way to get Morgan to love him. With Merlin’s help, Morgan contrived to get her new boyfriend beheaded. That criminal favor didn’t gain for Merlin Morgan’s love.

Merlin fared even worse with Ninianne than with Viviane or Morgan le Fay. Merlin fell in love with Ninianne. He longed to have sex with her. He went to see her every day for four months. She kept him in a friend zone and never had sex with him. Secretly she hated him. She accepted his visits because she wanted to learn magic from him. When Ninianne set out on a long journey to her home country, Merlin accompanied her. Near the Lake of Diana, Merlin asked Ninianne if she wanted to see it. She said that she did, so Merlin showed it to her. He also showed her a tomb:

here lies Faunus, Diana’s lover, who loved her madly, and she was false to him and killed him by the greatest treachery in the world. Such was his reward for loving her faithfully. [3]

Ninianne asked Merlin how Diana killed Faunus. Merlin explained that, after living with Faunus for two years, Diana fell in love with another man, Felix. To get rid of Faunus, she by trickery induced him to climb naked down into the tomb. Then she sealed him in with a stone. She then got some molten lead, poured it in on him, and killed him. Like the knight in the seven sages version of the widow of Ephesus, Felix was outraged at her behavior. He beheaded her and threw her body into the lake. Ninianne learned much from that story. Merlin, despite his powers of prophecy, perceived nothing.

Ninianne hated and exploited Merlin while he loved her. Despite never having slept with Merlin, Ninianne told Merlin that she wanted him to build for her a beautiful, luxurious house by the lake:

He said that he would undertake it gladly, since she asked for it of him. [4]

She invited her guy friends to join them at her new house by the lake:

“I tell you,” she said, “that I have gold and silver, which Merlin has given me, as much as you can spend in your whole lives.”

Merlin lived with Ninianne in the house by the lake. He lived with her as a friend, but loved her passionately:

Merlin stayed with Ninianne and lived there night and day, and he loved her so passionately that he loved nothing else in the world so much. Because of the great love he had for her, he did not dare ask her to do anything for him, for he dared not anger her. He kept thinking that in some way it would happen that he could have his will with her completely {have sex with her}.

Merlin’s behavior toward Ninianne caused her to hate him even more:

there was nobody in the world she hated so mortally as she did Merlin, because she knew well that he desired her maidenhead [5]

Men’s sexuality is never more hated than when a man seeks sex servilely and imploringly as a “friend” offering many material gifts.

Ninianne murdered Merlin through adapting stories he told her. One day when they were out in a deep valley, Merlin asked Ninianne if she wanted to see a lovely little room hewn in the rocks. She said that would be a marvel. Merlin, ever the worshipful beta, declared “You are right.” Then he told her the marvelous story. A prince infuriated his father the king by falling in love with a low-born woman. Because his father threatened to kill her, he secretly had his men chisel a hidden refuge in the rocks. The prince and his beloved took up residence there for the rest of their lives. They died on the same day. Their bodies, embalmed, were placed in a sarcophagus carved in the rocks.

Ninianne re-imagined the story of the two lovers along the line of the story of Diana. Ninianne conceived a plot to kill Merlin:

When the maiden heard this story, she was full of joy, and she thought then that she would put Merlin there, if she could, and if magic and the power of words could help a woman, she thought she could accomplish it. [6]

Ninianne told Merlin to lift by magic the heavy stone covering the two lovers’ sarcophagus. She then said that she wanted to sleep in the room next to the sarcophagus. Merlin bedded down next to her “but in another bed.” Once Merlin fell asleep, Ninianne so enchanted him that he wouldn’t awaken for a long time. She ordered other men to throw Merlin’s body into the sarcophagus and replace the stone covering. She then sealed the tomb with a magic spell she had learned from Merlin. Entombed by his beloved, Merlin died a slow, horrific death in the presence of the embalmed bodies of the two dead lovers.

Merlin the magician died a horrible death because he lacked the most important magic for men: seductive love magic. The equipment that all men have is largely sufficient for seductive love magic. What’s most important is true learning. Merlin could have studied how Paul seduced Thecla. He could have learned how Joseph converted Aseneth. Saint Jerome, who had many devoted women followers, provided a well-known model for being confident, authoritative, and highly entertaining. Merlin could have imitated Saint Jerome, but for carnal purposes.

Seductive love magic ultimately rests on empirical science. What happened to Merlin was highly predictable. If men abase themselves and seek love servitude to women, women will respond to them like the belle dame sans merci.

[1] The Story of Merlin, Ch. 57, from Old French trans. Pickens (1993) p. 416.  The subsequent two quotes are from id., and the following quote, from id. p. 417. I’ve made some minor changes in the translations for clarity. Viviane is also spelled Niviene. The Story of Merlin is part of the Lancelot-Grail Cycle of Arthurian romance (also called the Vulgate Cycle or the Prose Lancelot).  The whole cycle of five Arthurian romances was composed between 1215 and about 1235. They followed Chrétien de Troyes’s Arthurian romances of the second half of the twelfth century. Lacy’s preface to Pickens (1993) p. ix.

[4] Post-Vulgate Merlin, Ch. 32, from Old French trans. Asher (1995) p. 247. The subsequent three quotes are from id., pp. 247-8. In the Prophecies of Merlin (Arthurian romance written in the 1270s), Merlin exchanges magic teaching for sex with a variety of women. Morgan le Fay and three other woman who slept with Merlin in exchange for magic teaching become angry that Ninianne acquires more magic teaching from Merlin without even sleeping with him. Berthelot (2000) pp. 60, 71-2.

[5] Hatred for men’s heterosexuality also characterizes Diana in Ovid’s Metamorphoses, Bk 3:165-252. Because Actaeon happened to see Diana naked, she was not appeased until she contrived to have him torn to death by his dogs. Diana’s attitude is now prevalent in university sex-crime tribunals.