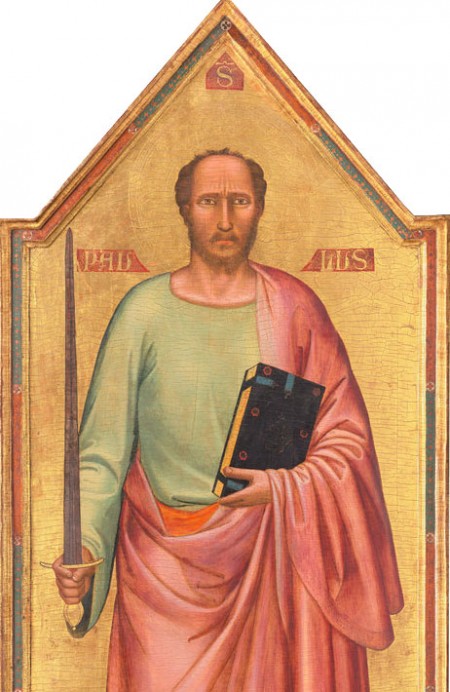 In the non-biblical Acts of Paul and Thecla, Paul is described as short, bald, and bow-legged. In a biblical epistle, Paul described himself as poorly dressed and homeless.[1] Nonetheless, Paul in Iconium attracted the love of the wealthy, beautiful, young woman Thecla. Her enthrallment with his words and Godly mission prompted her to break off her betrothal to another man. Persecution and imprisonment of Paul didn’t deter Thecla’s love for him. Thecla loved Paul through vicious punishments imposed on her. Acts of Paul and Thecla describes how Paul so completely seduced Thecla.

Paul boldly defied the dominant culture and stood as a man proclaiming the truth as he understood it. In a culture that emphasized men competing for worldly status at sumptuous, sensuous banquets, Paul was a renegade. He urged purity of heart, chastity, renunciation of the world, and following Jesus Christ. Sitting at a window, Thecla heard Paul’s words. She stayed at that window for three days and three nights. She eagerly sought every word that Paul said. She also saw many young single women and married women going to see Paul.[2] Thecla’s mother observed:

my daughter … clinging to the window like a spider, catches his words and grows with a strange eagerness and a fearful passion; for the young woman hangs upon the things he says and has been captivated.[3]

When Thecla’s fiancé Thamyris pleaded to her to leave her position at the window and come to him, she ignored him. Thamyris had “much wine, great wealth, and a splendid table.” Marriage contracts and wealth didn’t matter. Thecla wanted to be with Paul before Paul even noticed her.

Paul being sent to prison prompted Thecla to acts of loving devotion. Thecla was from a wealthy family of Iconium. Her family had slaves that guarded the door of the family home. Thecla nonetheless sought to be with Paul in prison. At night, Thecla bribed the door-keeper with her bracelets to get out of her house unnoticed. She gave a silver mirror to the jailer to get in to see Paul. There she sat at Paul’s feet and kissed his fetters. Paul confidently proclaimed to her the might of God. After some time, Thecla was discovered in prison. She was there affectionately bound with Paul. When Paul was taken away for questioning, Thecla “pressed herself to the place where Paul had sat and taught in the prison.”[4] Thecla yearned for Paul in his absence.

I will cut my hair short and follow you wherever you go.[5]

Both in the ancient world and today, men tend to prefer women with long hair. Paul obliquely acknowledged the hostile circumstances for feminine beauty and implicitly indicated that he preferred Thecla to retain her long hair. He also brought up her former betrothal and questioned her faithfulness in their circumstances:

The times are evil, and you are beautiful. May no other temptation come upon you, worse than the first {agreeing to marry Thamyris}, and you do not withstand it but act cowardly in love.

Men who put women on pedestals earn only their frigid praise. Paul had the confidence and skill to tell Thecla of her potential weakness. Thecla responded with eagerness to please Paul and God. Most scholars read the Acts of Paul and Thecla to imply that Thecla cut her hair short. That interpretation lacks understanding of love between a woman and a man. Thecla wanted to be beautiful in Paul’s eyes. She didn’t cut her hair short and didn’t act cowardly in love.

Paul at times acted aloof towards Thecla. Paul took Thecla to Antioch. There Paul rejected the immoral role of pimp or the conventional role of male protector. He required Thecla to act decisively to defend herself:

as soon as they had arrived a Syrian named Alexander, who was one of the leading citizens of Antioch, seeing Thecla, became enamored of her. He sought to persuade Paul as a pimp with money and gifts. But Paul said: “I do not know the woman of whom you speak, nor is she mine.”

Paul then apparently walked away from the scene. Thecla had to deal with the importuning Alexander herself:

{Alexander}, being a powerful man, embraced her on the open street. She however would not tolerate that. She looked about for Paul and cried out bitterly, “Do not force the stranger, do not force the handmaid of God! Among the Iconians I am a leading citizen, and because I would not marry Thamyris, I have been cast out of the city.” And taking hold of Alexander, she tore his cloak, pulled off the crown from his head, and made him a laughing-stock.[6]

Men in general are personally reluctant to be physically aggressive to women. Societies tend to sanction more severely men’s physical aggression to women compared to women’s physical aggression toward men. Paul knew that Thecla could make a laughting-stock of Alexander “on the open street.” Through his actions, he gave her the opportunity to act courageously. She rose to the occasion.

With Thecla facing punishment, Paul left her. Thecla was brought before the governor for her physical and symbolic violence against Alexander. Alexander had embraced Thecla against her will. Perhaps the charge against Thecla was that her response went beyond actions permitted in self-defense. Thecla was a stranger in Antioch. Alexander was a leading citizen of Antioch. Their case apparently was tried in Antioch. Those circumstances don’t favor equal justice, even given justice systems’ typical favoritism toward women. Thecla was condemned to the beasts. But with the vigorous support of the local women and the favor of God, Thecla miraculous prevailed over various trials. Paul, apparently with confidence in such an outcome and dedication to his big mission, didn’t stay in Antioch for Thecla’s trials. He went to work in Myra, about 200 kilometers distant from Antioch. Paul was no Ulrich von Liechtenstein.

Paul’s dedication to his big mission didn’t diminish Thecla’s love for him. After Thecla prevailed over the beasts and was released, she was invited to share the home and wealth of her friend and benefactor, Queen Tryphaena.  Tryphaena was a kinswoman of the Roman emperor. After eight days living with Tryphaena, Thecla yearned for Paul:

Thecla yearned for Paul and sought him, looking in every direction. And she was told that he was in Myra. And wearing a mantle that she had altered so as to make a man’s cloak, she came with a band of young men and young women to Myra. There she found Paul speaking the word of God and went to him.[7]

Paul took Thecla by the hand and led her into a house. There Thecla told Paul all that had happened to her. Thecla’s mother, who had treated her horribly, lived in Iconium.  Thecla declared to Paul, “I am going to Iconium.” Paul responded, “Go and teach the word of God!”  When she arrived in Iconium, Thecla “threw herself down on the floor where Paul had sat and taught the oracles of God.” Thecla wept and praised God. Then she found her mother. Thecla offered her mother not justified reproach or condemnation, but money and her daughter’s presence. After this Christian act of familial forgiveness and love, Thecla went off to witness to the word of God in Seleucia.

[1] 1 Corinthians 4:11. For the description of Paul in Acts of Paul and Thecla, see its s. 2. For available English translations, see note [3] below. Acts of Paul and Thecla is chapters 3 & 4 in a larger work, Acts of Paul. Many other non-biblical texts of acts of the apostles (conventionally called apocryphal acts of the apostles) have survived. These include Acts of John, Acts of Peter, Acts of Andrew, Acts of Thomas, Acts of Peter and the Twelve Apostles, and Pseudo-Clementines. These works typically center on a woman who converts to Christianity and visits the apostle in prison. Elliott (1993) provides English translations of these and other early Christian texts similar to those in the New Testament.

[3] Acts of Paul and Thecla, s. 9, from Greek trans. Elliott (1993), adapted slightly to improve the translation.  All subsequent quotes from Acts of Paul and Thecla are similarly from id. Barrier (2009) provides a critical edition with the Greek. R. McL. Wilson’s translation of the German translation of Edgar Hennecke and Wilhelm Schneemelcher (1959), Neutestamentliche Apokryphen in deutscher Übersetzung, is reprinted in Hansen (1998). A nineteenth-century English translation is available online in the Ante-Nicene Christian Library.

Long hair has long been regarded as important for feminine beauty. Apuleius’ Golden Ass, probably from the mid-second century, provides in the male narrator’s voice extravagant claims about the important of women’s hair:

May there never by an example of a thing as hideous as this! — if you rob a woman’s head of her hair, be she ever so beautiful, ever so extraordinary, if you strip from her face its inborn attraction, well! Even if she were to come down from heaven like a thunderbolt, even if she were born from the sea, brought into being from the waves; even, I say, if she were Venus herself, even if surrounded by the entire chorus of the Graces, even if escorted by a whole nation of Cupids and wearing Venus’ own girdle, smelling of cinnamon and dripping with balsam — should she make her entrance bald, she wouldn’t be able to please even her husband Vulcan.

[6] Id., s. 26 (sec. 4.1 in the Acts of Paul). Barrier (2009), p. 140, notes that Paul’s acts in this section “have been grossly misinterpreted.” Id. interprets them in terms of the plots of the Greek novels and the over-all trajectory of Acts of Paul and Thecla. I favor above a more immediately contextualized interpretation in terms of Paul’s aversion to being cast as a pimp and his natural behavior as a man to whom women are passionately attracted.

if certain Acts of Paul, which are falsely so named, claim the example of Thecla for allowing women to teach and to baptize, let men know that in Asia the presbyter who compiled that document, thinking to add of his own to Paul’s reputation, was found out, and though he professed he had done it for love of Paul, was deposed from his position.

[10] E.g. 1 Corinthians 14:26-39. For compelling examples of modern gynocentrism, see Kraemer (2011) Ch. 4, and Ratcliffe (2014). Consider: “Did the word of God originate with you? Or are you the only ones it has reached?” (1 Corinthians 14:36). That verse reads prophetically today like literature of men’s sexed protests. However, the underlying Greek for “you” is the masculine plural. The masculine plural was used generically to encompass women and men. See D.A. Carsen, “Silent in the Church,” ft. 47. From a Christian perspective, the word of God was born of a woman. But that doesn’t necessarily imply the inevitability of woman’s dominance of Christian theology, Christian literature, and Christian churches.

Barrier, Jeremy W., ed. and trans. 2009. The Acts of Paul and Thecla: a critical introduction and commentary. Tübingen: Mohr Siebeck.

Hägg, Tomas, and Bo Utas. 2003. The virgin and her lover: fragments of an ancient Greek novel and a Persian epic poem. Leiden: Brill.