The story of the Roman Christian woman and the Persian king celebrates Christian fidelity within circumstance of sexual submission.  In the third century, Persian forces took captive a Roman Christian woman named Candida.  The Persians took Candida and other Christian captives back to Persia.  According to a fifth-century Syrian account, Candida’s beauty caused Persian King Vahran II to fall in love with her:

because of her astonishing beauty the king, on seeing her, became enamoured of her and gave orders that she should enter his bed-chamber; and he took her as a wife.  His love for her exceeded his love for all his other wives [1]

Seduction here is nothing more than military conquest, personal beauty, and personal power.  Yet King Vahran did not merely ravish Candida.  He took her as his wife and loved her greatly. Moreover, Candida’s sexual submission to the king did not undermine her blessed status:

The blessed girl held on to her faith because she had been brought up by her parents as a Christian, and so she preserved her modesty and her faith intact.

Culturally elaborate forms of sexual seduction are at the center of the ninth-century story of the Syrian Christian woman and the Abbasid caliph.  In this story, Abbasid Caliph al-Mutawakkil decides to take a leisurely walk about a monastery in Homs, Syria.  The beauty of the girls and young men in the monastery captivates him.  He calls to a particularly beautiful girl.  She is “wearing a gown of the type slipped over the head and carrying incense for fumigation”; “she moved towards him with accomplished and perfect manners.”[2]  Displaying his own knowledge of manners, al-Mutawakkil turns to a monk to ask for the girl’s name.  Her name is Sa’anin, from the Arabic for “Palm Sunday.”[3]  Al-Mutawakkil asks for a drink of water.  After a highly mannered expression of honor for al-Mutawakkil, Sa’anin brings water in a silver jug.  Then al-Mutawakkil implores her like a man warily in love with a well-experienced and dangerous singing slave-girl:

“Sa’anin, if I loved you would you make me happy?” he asked her.  She took a deep breath and said, “Now I am your slave; but if I knew your love to be true and I controlled your heart, I fear that I would become a tyrant once my power was well-established.  Have you not heard what the poet says?
At first you were a slave to me,
but when you acquired power you became an enemy.
Where is the old joy of meeting?
It has turned into avoidance and repugnance.

These words project onto a Syrian Christian woman living in a monastery the courtly personal politics of singing slave-girls and the caliph’s harem.  Emphasizing that context, Sa’anin invites al-Mutawakkil and his companion to an upper room. There they enjoy food and wine. Al-Mutawakkil delights in Sa’anin’s “refined manners and the sweetness of her diction.”  That’s Abbasid cultural sophistication completely implausible for a young Christian girl living in a Syrian monastery.  After much drinking, Sa’anin takes up a lyre and sings:

O you who court my love, welcome,
I obey your order and may you court me for ever.
I am a slave to your love, so drink and give me to drink,
and turn away your cup from your friend if he refuses.
By the one who raised the sky, you have taken possession
of me and left my heart tormented by passion for you.

Like a highly professional singing girl, Sa’anin welcomes suitors, expresses her submission to them, and orders them to drink and buy her drink.  She thus encourages their patronage and generates income for the establishment’s proprietor.  That’s how elite entertainment establishments in Baghdad operated.  As caliph, al-Mutawakkil could demand unconditional submission from his subjects.  The Syrians, in turn, frequently contended Abbasid power.  Al-Mutawakill imposed degrading civic penalties on non-Muslims in 850 and crucified at the city gates of Homs two rebels in 855.[4]  That history plays no part in this story.  This story uses a Christian woman in a monastery in Homs to revel in the personal intrigues, culture, and pleasure of elite Abbasid sexual seduction.[5] 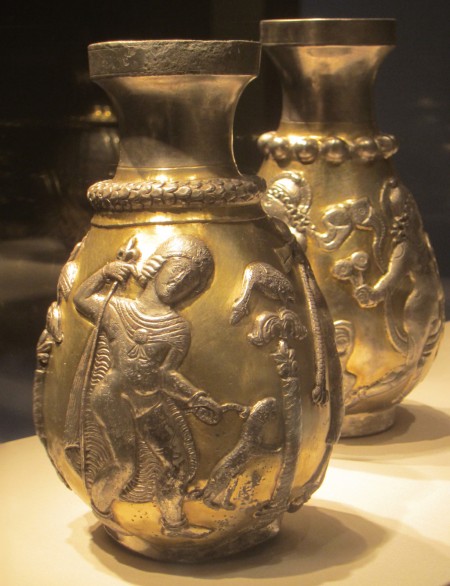 Religious fidelity is the central concern in the martyrdom of Candida.  Jealous of the Persian King Vahran’s love for Candida, his other wives complained to him that Candida “does not conform to your way of thinking but serves her own god and invokes him.”  King Vahran requested many times that Candida renounce Christianity and follow his Zoroastrianism.  He tried blandishments and offers of increased honors for her.  Candida refused to convert.  Then the King turned to terrible threats, and then to public humiliations and physical tortures.  These punishments included sexual shaming (showing Candida about the city naked but for chains) and sexual mutilations (cutting off her breasts).

Candida endured these horrors while proclaiming her love for Christ.  She described herself as betrothed to Christ and headed to her wedding feast.  Candida’s sexual submission to King Vahran did not impede her from understanding herself as being a bride of Christ.  Her sexual submission was unimportant within the ancient Christian celebration of her as a holy Christian woman.  Candida suffered death for her unwavering fidelity to Christianity as a religious identity.  The martyrdom of Candida seems to be oriented towards a persecuted ancient Christian community in Syria confronting the threat of captivity in Persia and of assimilation within Persian society.[6]

The story of al-Mutawakkil and the Syrian Christian woman diminishes human moral agency.  Just before al-Mutawakkil summons Sa’anin, he reads an inscription on a wall in the monastery:

A fugitive stranger robbed of his property was here and he says: my gathering split up having been in harmony, and my body is wretched with discomfort.

The triple misfortune of being away from home (stranger), not being able to go back home (fugitive), and being robbed of property combines widely recognized laments.  These misfortunes are further augmented with bodily wretchedness and the disintegration of social harmony.  Writing “I have exchanged joy for grief,”  the inscriber inscribes for himself in verse witness to the wisdom of Job:

O self, patiently endure the adversities of time!
Everything submits to what is decreed.

Sa’anin, a Syrian Christian woman living in a monastery and acting like a singing slave girl, parodies the holy Christian woman of Christian hagiography.  Al-Mutawakkil’s interest in her is culturally elaborated reactive desire.  Drinking wine is arguably against Islamic law.  The wine they drank in their upper-room revelry Sa’ani’s father brought from the stock of communion wine.  Al-Mutawakkil’s companion tried to refuse to drink, but at the caliph’s urging, he drank.  The story ends with conversion, marriage, and death:

al-Mutawakkil awakened her interest (in Islam) and she converted.  He married her and she was his favourite wife until he was killed; she was in the palace at the time. [7]

Fidelity and death here aren’t morally related.  In this story, the Christian woman’s conversion is much less important than her skills in seduction.  This story is from the Abbasid elite, playing in moral emptiness, tumbling forward with the belief that what will be, will be.

[1] Sixth-century Syrian manuscript, British Library Add. 12142, ff 104a-107b, trans. Brock (1978) p. 178.  All the quotes from the martyrdom of Candida are from id.  The account realistically describes ensuing problems with the king’s other wives: “they became jealous of the believing Candida, but because of the king’s love for her they were afraid of her.”  Id.

[4] In 850, al-Mutawakkil decreed disabilities, obligations, and public signs of inferiority on Jews, Christians, and other dhimmi. The population of Homs, including some Christians, revolted against local officials in 854 and again in 855.  Al-Mutawakkil had two of the Homs rebel leaders “publicly beaten, executed, and crucified on the city gates.” Cobb (2001) pp. 100-101.

[6] A large number of Roman Christians were sent to Persia as captives under Persian King Shapur I.  Greek and Syriac speaking Christians in Persia maintained separate identities and ecclesiastical hierarchies into the fifth century.  Brock (1982) p. 3.