Although Thecla was engaged to Thamyris, she fell in love with Paul. Just hearing Paul speak captivated Thecla. It wasn’t her fault. It was just the way she felt.

Thecla’s mother was furious at her for being in love with Paul. Her mother called Thamyris to their house. That really wasn’t necessary. Everyone was weeping bitterly, pleading with Thecla, and berating her. So cruel. That’s not the way a mother should treat her daughter just because she doesn’t want to go through with a wedding because she loves someone else.

The situation got worse. Her mother accused Paul of upsetting the whole city of Iconium. Two of Thamyris’ friends, who also knew Paul, blatantly lied and said that Paul said that women and men shouldn’t sleep together. That’s crazy. Paul didn’t say that. Even the tyrants running our schools haven’t tried to totally end sex. Or gender. Whatever.

So, get this, Thecla’s mother got her in trouble with the Governor. The Governor called Thecla up and said:

Why dost thou not marry Thamyris, in accordance with the law of the Iconians?

Thecla said nothing and just stared at Paul. She is so in love with him! Then her evil mother, that witch, cried out:

Burn the wicked one; burn her who will not marry in the midst of the theatre, that all the women who have been taught by this man (she meant Paul) may be afraid!

While the Governor seemed to like Paul and listened to him gladly, he knew he couldn’t rule against a mother. So he condemned Thecla to be burned. A rainstorm put out the fire, thank God. Otherwise, she would have burned.

Thecla left home and went to be with Paul. After the way her mother treated her, how could she stay at home? Thecla had been everywhere in Iconium. I hate that place, too. She and Paul went to Antioch, which is a big city with great night life. But before they went to a restaurant or club, a creepy guy named Alexander hit on her. Right out in the open street, with Paul next to her! Thecla tore Alexander’s fancy clothes, knocked him in the head, and made him the laughing-stock of Antioch.

Thecla got in trouble with the authorities for that. Alexander had friends in high places and pulled strings to get back at her. So Thecla rejected that beast Alexander, and she got condemned to the beasts! A lot of women in Antioch stood up for Thecla. They cried out: “Evil judgement! Impious judgement!” And Queen Tryphaena, who was a close friend of the Emperor, befriended Thecla. Queen Tryphaena’s daughter had died. But her daughter spoke to her in a dream:

Mother, receive this stranger, the forsaken Thecla, in my place, that she may pray for me and I may come to the place of the just.

I always pray for all the souls of the faithful departed, and a queen hasn’t adopted me. Well, I haven’t been thrown to beasts, either. When they threw Thecla to the beasts, all the women sat together to watch. Some yelled: “Away with the sacrilegious person!” But other women yelled: “O that the city would be destroyed on account of this iniquity! Kill us all, proconsul; miserable spectacle, evil judgement!” Divided, the women couldn’t rule.

A lioness and God saved Thecla. Thecla was put in the arena, and beasts were sent at her. But the lioness lay down lovingly at her feet. When a bear tried to attack her, a man bear I’m sure, the lioness defended Thecla and tore the bear apart. Then Alexander sent his lion to attack Thecla, but the lioness defended her. Both the lion and the lioness died fighting. They fought a spectacularly bloody fight over Thecla. More beasts were sent at Thecla, but she jumped into a pit of water and was what the Christians call baptized. There was a lightening flash, and then all the seals that were going to eat her died. Thecla emerged in a cloud of fire. More beasts were sent at her. A lot of women were yelling and throwing fragrant plants at her so that the whole arena smelled like perfume. All the beasts were calm as if they were asleep. It was exciting and dreamy.

Then Alexander did something really awful. You know how guys seem to be driven by their balls? Well, Alexander tied Thecla to two bulls, then poked the bulls’ balls with a red-hot iron. They went wild.  But Thecla in her robe of flames burned through the ropes tying her to the bulls. She got away unharmed from the bulls.  Then Queen Tryphaena fainted. I thought I was going to faint, too. All the Queen’s maids yelled, “The Queen Tryphaena is dead!” Alexander became very afraid. He fell at the Governor’s feet and pleaded:

Have mercy upon me and upon the city and set the woman prisoner free, lest the city also be destroyed. For if Caesar should hear of these things, he may destroy the city along with us because his kinswoman, Queen Tryphaena, has died at the theatre gate.

Alexander couldn’t even stand up to Thecla. I knew the Queen’s maids could fool him.

The Governor decided to release Thecla to the maids. They all cried out in praise to God: “One is God, who has delivered Thecla.” The whole city was shaken by the maids’ cries. Thecla was saved from death. Queen Tryphaena returned to life. She said to Thecla:

Queen Tryphaena took Thecla into her big house and gave her jewels and luxurious robes. Now all us girls want to become Christians like Thecla. 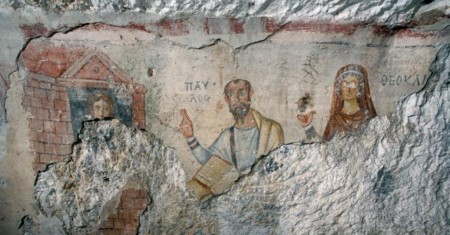 In the sixth century, in a cave reputed to be the place where the Apostle John had taken Mary, the mother of Jesus, a fresco was made of Thecla, Paul, and Thecla’s mother Theocleia. Theocleia stands to the viewer’s right of Paul. Theocleia’s hand has two fingers raised in a gesture signaling that she, like Paul, is seeking to teach Thecla. Some time later, someone scratched out Theocleia’s eyes and blacked out her two-fingers teaching gesture. That person passionately identified with Thecla’s love of Paul and despised Thecla’s evil mother Theocleia.

The text above is adapted from the Acts of Paul and Thecla, written in Greek in the second century. Barrier (2009) provides a critical edition. The quotes above are from the translation of Elliott (1993), with minor modifications. A nineteenth-century English translation is available online in the Ante-Nicene Christian Library. A scholarly consensus now exists that a woman or a community of women wrote or created orally the Acts of Paul and Thecla prior to Tertullian’s apparent reference to a presbyter producing the Acts of Paul. Barrier (2009) p. 22. The fresco shown above is in a cave, called the Cave of St. Paul, in Bülbüg Dag near Ephesus in present-day Turkey. The image of the fresco is fairly used from the Ephesus Foundation website. 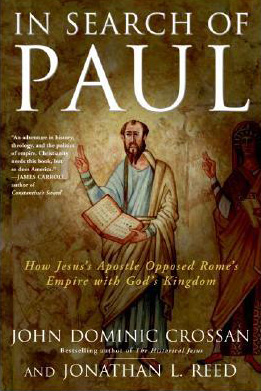 Crossan & Reed (2004) on its cover featured the fresco of Thecla, Paul, and Thecla’s mother. The fresco was tendentiously cropped, highlighted, and digitally restored. The book’s preface declared:

An earlier image in which Thecla and Paul were equally authoritative apostolic figures has been replaced by one in which the male is apostolic and authoritative and the female is blinded and silenced. … here are our questions. Is Thecla still departing or now returning? Does a search for Paul push female leadership, authority, and apostolicity off to the side and finally off that cover, or does a search for Paul bring Thecla, women, and equality back steadily and inevitably into the light until female and male stand together side by side in the full life of the center?

Id. pp. xii-xiv. That’s only rhetorical posing. It depends on faulty identification of the figures in the fresco. In the full image of the fresco (see above), the figure within the house on the viewer’s left is clearly Thecla at her window. The figure in the center is explicitly labeled in Greek as Paul, and the figure on the right, as ΘΕΟΚΛΙ (THEOCLI).  Hence the figure on the right (on Paul’s left, with the left side having disparaging biblical significance) surely is Thecla’s mother Theocleia, not Thecla herself. The fallaciously based analysis in Crossan & Reed (2004) remains disseminated worldwide about a decade latter in a Wikicommons page featuring the fresco, tendentiously cropped. Humane imagination provides better understanding.

Barrier, Jeremy W., ed. and trans. 2009. The Acts of Paul and Thecla: a critical introduction and commentary. Tübingen: Mohr Siebeck. Based on dissertation, freely available online.