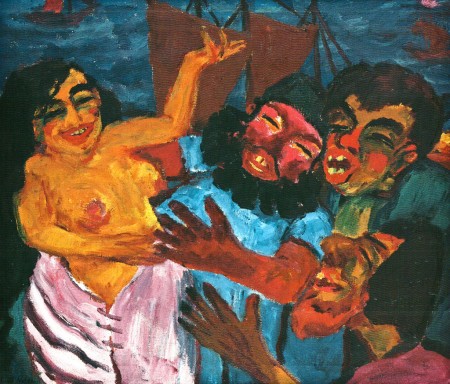 Men have a propensity to compete to be first and to argue about who was first. Writing about 375 GC, Jerome noted that who was the first important Christian hermit  “has been a subject of wide-spread and frequent discussion.” Jerome made that observation in the first sentence of his work, Life of Paul the First Hermit. Jerome’s Life of Paul the First Hermit implicitly competed against Evagrius of Antioch’s popular translation of the Life of Antony, completed in 374 GC.[1] Jerome put forward the claim that Paul, not Antony, was the first important Christian hermit. That argument eventually led to honoring the penitent harlot Saint Mary of Egypt.

Jerome signified the primacy of Paul over Antony in a variety of ways. Paul was 23 years older than Antony. Jerome narrated:

the thought occurred to {Antony}, that no hermit-monk more perfect than himself had settled in the desert. However, in the stillness of the night it was revealed to him that there was farther in the desert a much better man than he, and that he ought to go and visit him {Paul}.[2]

Antony made a difficult, dangerous journey to visit Paul. At first Paul refused to see him, but Antony’s pleadings won Paul over. They competed in humility to have the other break bread for a meal. They finally agree to simultaneously break bread together for their meal. Paul requested to be buried in the cloak that Bishop Athanasius gave Antony. Antony, in awe of Paul’s presence, readily agreed. After Paul’s death, Antony took the tunic Paul had woven for himself out of palm-leaves. Antony kept Paul’s garment and wore it on the most holy days of Easter and Pentecost. If Antony recognized Paul as first among hermits, who could dare claim Antony to be first?

The Life of Mary of Egypt, the Former Harlot, probably from the sixth or seventh century, implicitly acknowledged competition in providing stories about saints’ lives. The narrator’s frame for Mary’s life justified as a religious obligation publicly recording her life. The narrator’s frame emphasized the truthfulness of the account.  The sexual dimension of Mary of Egypt’s life probably helped to motivate these meta-assertions. Yet sexual temptations and activities were issues that early Christians openly discussed. The life ends with assertion and denial of competitive striving:

The monks continued to pass on these events by word of mouth from one generation to the other, presenting them as a model {of ascetic life}, to benefit those who wish to listen.  However, to this day they have never heard that anyone else has set this story down in writing. I have put down in this written narrative what I had heard by word of mouth. Perhaps others, too, have written the Life of the blessed {woman}, and probably in a more imposing style than my own, even though nothing of this sort has ever come to my attention. Nevertheless, I wrote this story to the best of my ability, desiring to prefer nothing but the truth.[3]

Primacy in writing and concern for style and writing ability are matters of personal status. They are common competitive issues beyond making truth widely known. The sensational sexual dimension of Mary of Egypt’s life made it a particularly potent competitor to other saints’ lives.

The Life of Mary of Egypt, the Former Harlot describes monastic community rules designed to suppress competition among monks. In that account, the monk Zosimas, like the monk Antony in Jerome’s Life of Paul the First Hermit, was an exceptionally good monk concerned about whether another monk existed better than he:

Is there any man among those leading a contemplative life in the desert who surpasses me in ascetic practice or spiritual contemplation? [4]

Pondering this question, Zosimas received the command to go forth “to learn how many other ways lead to salvation.” Zosimas went forth and joined a community of monks who excelled in ascetic life and spiritual contemplation. On the first Sunday of Lent, each monk went out to be alone in the desert. They returned on Palm Sunday. The monks’ spiritual struggles in the desert were by institutional rule non-competitive:

there was a rule that each monk observed as an inviolable law: not to be concerned with the way that the other monks practiced self-restraint or conducted themselves. … Each monk returned {to the monastery}, having as the fruits of his own purpose his own conscience, which knew how he had labored and with what toil he had sown the seeds {of his spiritual struggle}. No {monk} asked another anything whatsoever about how or in what way he had exerted himself in his struggle. This was the rule of the monastery and in this way it was well fulfilled. For when each of them is in the desert, he struggles by himself under the supervision of God, the Judge of the contest, so that he may free himself from the desire to please men or to practice self-restraint in order to show off. For those actions actions undertaken for the sake of men and performed in order to please them, not only do not benefit the one who does them, but are an additional cause of much harm to him.[5]

This institutional rule indicates the reality of the corresponding problem. Early Christian monks competed with each other to be recognized as outstanding in ascetic discipline and spiritual purity.[6]

The penitent humility of the harlot Mary of Egypt trumped monks’ competition in ascetic discipline and spiritual purity. Zosimas didn’t follow the monastery’s rule on non-competition. He rapidly journeyed to the innermost part of the desert hoping to find a holy father. He encountered instead Mary of Egypt, naked and burnt black by the sun. She fled from him. He chased her and begged her for a blessing. Finally, when he was exhausted, she turned to him and addressed him by name. She described herself as a sinful woman. She asked him for his blessing. Like Antony and Paul arguing over who should break the bread for their meal, Zosimas and Mary argued over who should bless whom. With poignant irony, Mary, deferring to Zosimas’ priestly authority, obeyed his request for her to bless him.

Zosimas recognized that the penitent harlot Mary of Egypt was spiritually superior to him. Further parallels to the Life of Paul the First Hermit figure Zosimas as Antony and Mary as Paul.[7]  Mary of Egypt, the former harlot, emerged as the ultimate victor in competition for ascetic and spiritual excellence among desert hermits.

[6] Surviving collections of stories of early Christian hermits include the Lausiac History of Palladius, the Meadow of John Moschos, and the Apophthegmata Patrum (Sayings of the Fathers).

[7] Antony and Zosimas see Paul and Mary in extraordinary spiritual visions: “in robes of snowy white ascending on high among the bands of angels” (Paul), walking on water (Mary). Like Antony at Paul’s request, Zosimas returns to his community at Mary’s request. Antony and Zosimas bury Paul and Mary, respectively, with the help of lions digging the graves.

[image] Mary of Egypt among sinners in the port of Alexandria. Emil Nolde,1912. Kunsthalle (Museum of Art), Hamburg, Germany. Thanks to Playing Futures: Applied Nomadology on flickr.