The plot of Aristophanes’ Lysistrata is relatively well-known.  The women of Greece are upset that the men are making women’s lives more difficult through their well-organized attempts to kill each other.  The main character Lysistrata leads a sex boycott that conquers the Greek men.  The women force the men to redirect their efforts from war on men to better serving women.[1]

Judah ibn Shabbetai’s Minhat Yehudah is less well-known and deserves more attention.  The main character Zerah declares that women have rejected wisdom and embraced folly.  Women have thus made peace impossible amid the chaos of mis-directed desires.  Zerah urges the men of his Castillian village to shun women.  Zerah leads the men to a new, men-only place of peace and delight far beyond that of the modern MGTOW imagination.  Zerah’s place is on a bank of river where grow henna, nard, lush oaks, and fruit trees of every kind.  Every kind of fawn and deer is there, and birds, cooing and piping, chirping and twittering in the old-fashioned way.  There the men care for themselves:

Sometimes they discoursed on laws and statutes, sometimes they turned to food and drink; yet other times they would laugh and play, for thus are days of pleasure passed.[2]

Zerah, their leader, does not lead a life of total self-indulgence.  For one month each year he preaches throughout neighboring districts:

Wherever he went he proclaimed:  “Shun woman as you beware the glittering sword!  Seek ease!  Find peace! Rid yourselves of jewelry-wearers that your days may be long.  … Let the wise man listen and pay me heed; to make my speech longer there is no need.”

Men living lives of their own choosing, not under the direction of women, infuriated women:

Hopping with rage they gathered, young and old, widows and girls, to take counsel and to plan action.  Pain and shock had seized them; their spirits were shaken.  They tore at their skin in their fashion, and their faces were fallen. … “This man {Zerah} is guilty of a capital crime!  By stoning shall he die, and no ransom will get him reprieve, for he has slandered the virgins of Israel.  Where are the masters of deceit, experts in intrigue? … Let us find a stratagem to wipe him out of the nation and get our revenge.  Let us demolish his devices so that men may go with their sons to visit the girls again.” [3]

The women arrange to exploit a well-recognized weakness of most men.[4]  They bring to Zerah a young, beautiful, warmly receptive woman.  Zerah falls in love with her and wins her hand in marriage.  Blissfully in love, Zerah obliviously agrees to a wedding contract with terms like these:

And this is the dowry that the bride brought with her: waste, shame, horror, and blame.  Thus the sum of the ketubbah, the gift, the dowry, and addition is a burn, a wound, a sore, and a lesion.

For Zerah’s bride, the women substituted an ugly shrew.  Her name is Rizpah bat Aiah, which means “Coal, Daughter of the Vulture.”

Zerah’s movement of men for peace collapses amid the horrors of Zerah’s married life.  Rizpah demands from Zerah a long list of expensive material goods, including jewelry and fancy clothes.[5]  She also orders Zerah to stop reciting poetry:

Stop taking up your rhyme!  Do not even raise your voice.  I have no interest in wisdom or culture, only in bread and meat.  Your poems and lyrics mean nothing to me … Get up, take your plow and your plowshare, your quiver and bow, and go about the town from dusk to dawn, stealing, murdering, and swearing falsely.  As your household grows, you will have to provide their daily bread.

Zerah’s friends advise him to flee.  But Zerah wisely replies that he cannot escape the force of law that extracts from men money for having sex or getting married: “husbands are like prisoners in irons; they can be redeemed only with silver.”

After Zerah’s friends give him what amounts to much silver, Zerah heads to family court to try to extract himself from his horrible marriage.  But the family court system is highly politicized.  Women dominate the proceedings.  The majority urges that Zerah be treated harshly:

Let him not be redeemed or buy his freedom.  Make his yoke heavy; do not sunder his bonds.  It is well for a man to bear the yoke when he is young.

After the wife’s advocate warns of dire consequences for the nation if Zerah is shown mercy, the judge condemns Zerah to death.

Zerah is saved only by the narrator declaring that the whole story is imaginary.  Many men now and then know better.  In Judah ibn Shabbetai’s Minhat Yehudah Sone ha-Nashim, men fail to win peace in a way far beyond the imagination of Aristophanes’ Lysistrata.[6] 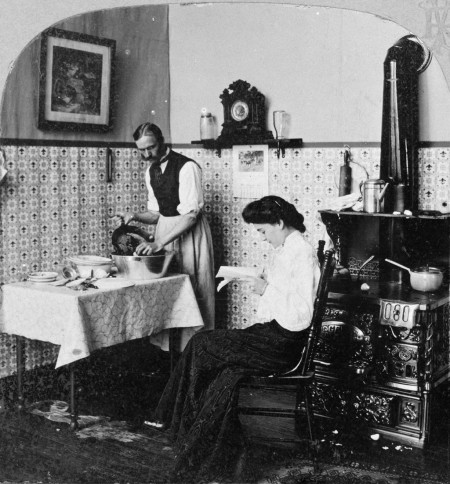 [3] This text, like many others, acknowledges men’s inferiority in social ingenuity.

[4] Zerah’s weakness is foreshadowed in dreams.  After his first dream, his companions counsel him: “Pay no heed to fantasies that originate deep within the body.”  Id. p. 280.  In Zerah’s second dream, a beast “seized him, pulled out his root, and took hold of his privates; then it opened its mouth and made to swallow him.”  In a third dream, he fell into a deep pit.  Id.  Falling into a deep pit commonly figures marriage in the literature of men’s sexed protests.

[6] Lack of imagination is also evident in scholarly articles considering Shabbetai’s Minhat Yehudah Sone ha-Nashim.  For example, Fishman (1988) and Jacobs (2003) dwell on misogyny.  They show no appreciation for how the term misogyny has functioned to shame, silence, and subordinate men while obscuring the literature of men’s sexed protests.  Scheindlin, in his introduction to his translation in Stern & Mirsky (1990), compares Shabbetai’s Minhat Yehudah to Euripides’ Hippolytus.  The latter work, however, lacks the dimension of social protest in men’s heterosexual renunciation.

Jacobs, Jill. 2003. “‘The Defense Has Become the Prosecution’: Ezrat HaNashim, a Thirteenth-century Response to Misogyny.” Women in Judaism: A Multidisciplinary Journal. 2 (3).

One thought on “men fail: Shabbetai’s Zerah is no Lysistrata”