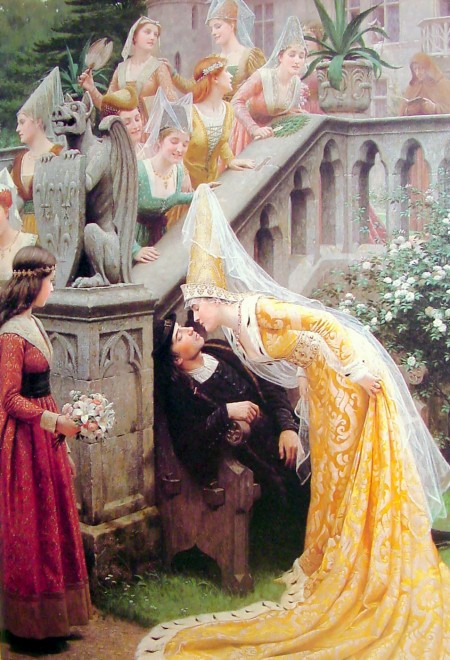 Alain Chartier’s Belle dame sans mercy shows men’s servility to women ending disastrously. Alain Chartier was a man renowned for oratory and literary excellence in fifteenth-century France. He also served as a royal official. He probably wrote Belle dame sans mercy about 1424. In that poem, a man, seeking love, addresses a woman. He immediately identifies himself as a prospect for the Omega Male Hall of Shame by declaring to her:

I suffer from a pain that burns and enflames me
and is killing me, for want of you.
And yet you do not seem to care,
refusing even to notice it,
and are indifferent
when I speak to you about it,
and yet your reputation will not suffer;
neither will you lose honor or incur any shame.

Alas! How can it cause you pain, my lady,
if the heart of a sincere man so desires you,
and if, with honor and beyond reproach,
I declare and consider myself yours?
As is right, I ask for nothing in return,
for my will is submitted
to your pleasure, not to my own,
and my freedom enslaved to you.

Although I do not deserve
your grace for my service,
at least permit me to serve you
without incurring your displeasure.
I will serve though I am not worthy,
keeping true to my troth,
for this is the service Love requires:
that I be your humble servant. [1]

The woman wasn’t interested. The man pleaded and begged. That makes men repulsive to women. So it was in this poem. After an unbearably lengthy display of beta male behavior from the man, the woman ended the conversation:

Once and for all, try to understand
that you have been refused without respite.
You annoy me with your repetitions,
for I have already said enough to you. [2]

The man left with tears in his eyes. He prayed for his death to come quickly. It did. After tearing out all his hair, he died in misery. This was a medieval man who did not understand medieval women’s love poetry. He had none of the seductive allure of Reservoir Tip.

Depicting a pathetic omega male who died in lonely misery outraged the champions of women. In response to Chartier’s Belle dame sans mercy, some courtiers sent to three ladies of the court a request:

May it please you by your grace to turn your eyes from reading such unreasonable words and to give them neither credence nor attention, and to tear them up and crush them wherever they might be found and also to order punishment for the writers of such words so that this might serve as example to others. [3]

The three ladies in turn proposed to punish harshly Alain Chartier for depicting a lady without mercy:

You can write whatever you wish to write
for no matter what you might know how to compose
you will not impede a right judgment
on your misdeed that damages our reputation.
And so choose the least of these two courses
without seeking to defend or debate:
either you die, or you must take back your words
because it is not fitting that a woman combat you. [4]

In response to their attack on him, Alain prayed that God would grant the ladies joy. He asked that they grant him “by your grace, advice, comfort, aid, and succor.” He abjectly explained:

My book, of little importance or value,
is written to no other end
than to simply record the account
of a sad and unhappy lover
who cries and moans that he has been waiting too long
and that Refusal rebuffs him.
He who understands anything different,
either is looking too hard or is not looking at all. [5]

Alain remanded himself to the ladies’ court and pledged to obey them.

Alain Chartier’s Belle dame sans mercy represents oppressive medieval servility and ignorance that remains with us still. The best hope for a renaissance is to recover classics such as the Life of Aesop, Juvenal’s Satire 6, and Jerome’s Golden Book of Theophrastus.

[3] The Request Sent to the Ladies against Master Alain, excerpt, from French trans. id. p. 99.