One day I was in my bedroom sitting at my desk reading documents from the debate about The Romance of the Rose.  I might have fallen asleep, or maybe my mind was just wandering, and I thought of that time that Guy found his wife in their bedroom underneath Simon, pumping away.  Gender, who assiduously monitors my thoughts, suddenly appears.  She says authoritatively:

if he finds her even in the act, he should take care not to open his eyes in that direction.  He should pretend to be blind, or more stupid than a buffalo, so that she may think it entirely true that he could detect nothing.

Gender, I honor the astonishing and magnificent height of your social construction.  My power of communication is far inferior to yours.  But please, I humbly beg, do me the favor of explaining, out of compassion for my male ignorance, why you insist on teaching men and women to be blind to sex and more stupid than brood parasites like brown-headed cowbirds?  Silence, she commands. 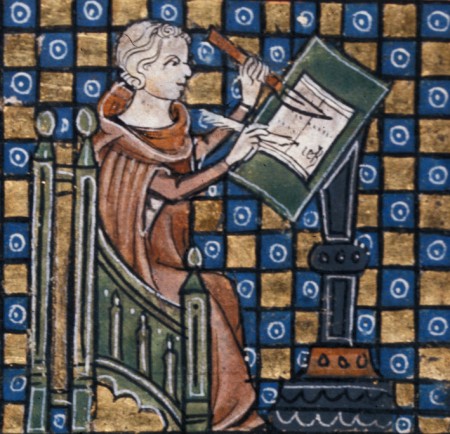 I say, with due respect to you, that you are committing a great wrong against freedom of thought and speech.  Men in the Dark Ages wrote all kinds of outrageously funny texts by candlelight.  I have a bright light humming with the power of electricity right above my desk.  Why can’t I write like men did in the Dark Ages?  Silence, Gender commands.  Anything you write rapes women.

That’s a most unfair, unreasonable, and prejudicial claim that does dishonor to your august academic high chair.  To prevent what you falsely call the violence of my words, will you have me shackled and starved like that poor farmer who found fish in his field?  At least in pre-Islamic Arabia, women’s calls to men to kill other men were poetic.  Your words are uncivil and ugly.  You describe as the criminal act of rape the natural and virtuous work of styluses writing on tablets.

You vile antifeminist!  You vicious misogynist! snarls Gender.  No women will ever sleep with you.  Your mother hates you.  I look around for a crowd coming to attack me, but only Gender is with me in my bedroom.  I remember reading:

If the woman beats the man or vilifies him, he should take care that his heart does not change.  If he sees himself beaten or reviled, even if she should pull out his nails alive, he must not take revenge, but rather thank her and say that he would like to live in such martyrdom all the time, as long as he knew that this service was pleasing to her, indeed that he would rather even quite freely die at that moment than live without her.

Gender, most cherished lord and master, wise in behavior, a lover of knowledge, immersed in academic learning and expert in rhetoric, I’m just a man of untrained intellect and uncomplicated sensibility.  I wish to state, proclaim, and maintain publicly that you have wrongly and without justification criminalized men.

Gender orders me to check my male privilege.  Men die on average five years younger than women.  Men die from violence-related injuries four times as frequently as do women.  Men die on sinking ships because men’s lives are categorically valued less than women’s lives.  Men have no reproductive rights and are imprisoned for doing nothing more than having consensual sex and being poor.  Upon divorce, men are deprived of physical custody of their children fourteen times as frequently as women are. Men are forced to make financial payments to the child’s mother eight times as often as the mother pays them. I had gone only a short way down my checklist when Gender ungraciously interrupts me:

all men betray and deceive women; all are sensualists, taking their pleasure everywhere. …  All men are very expert liars.

She accuses all men without exception.  If she, venturing so far beyond the bounds of reason, took it upon herself to accuse men or judge them erroneously, blame should be imputed not to them but rather to the person who tells lies at such a distance from the truth and so lacking in credibility, inasmuch as the opposite is patently evident.  I declare that there already have been, are, and will be many men more worthy, more honorable, better trained, and even more learned and from whom greater good has resulted in the world than Gender ever accomplished.  One finds ample proof of this in the work of al-Harizi, Judah ibn Shabbetai, Jaume Roig, Giovanni Boccaccio, the Archpriest of Talavera, the Archpriest of Hita, and Budasf himself, not even to mention the illustrious teacher of love Ovid and the insightful and influential Matheolus.  Gender, do you even deny the existence of the One Good Man?

Gender is glaring at me with that womanly look that makes strong men wither in shame.  I remember:

if, without entreaty, she were to command him, “Jump, lover,” or “Give me that thing,” he would immediately give it and jump when she ordered him to.  In fact, whatever she might say, he would jump so that she might see him, for he had placed his whole desire in doing all her pleasure.

Must I jump to please Gender?  No I won’t.  Gender, you have no right to be offended that my voice is other than yours.  I will not let you dress me in women’s clothes, whether I am sleeping or awake.  I have certain knowledge of my own being.

You, Gender, look only from your woman’s perspective.  I have read enough recent scholarly studies to understand that Gender has become essential and cannot be changed.  Men are doomed to being socially dominated.  But until you burn my books, I will laugh uproariously with the jolly clerk Jankyn.

A man may now speak so boldly to a woman only in a dream.  Shaking uncontrollably and wet with tears, I awoke.

You resemble the fool who, as the joke tells, was dressed in women’s clothes while sleeping in the mill, and when he woke up, because men who were making fun of him assured him that he was a woman, he believed their deceptive words rather than the certain knowledge of his own being.

Trans. Hult (2010) p. 238.  For an insightful analysis of the debate on The Romance of the Rose in relation to censorship, see Hult (1997).  Here’s a recent, interesting unorthodox perspective on Christine de Pizan’s work.  It provides a refreshing contrast to the dominant presentist pieties on display in the series editors’ introduction to Hult (2010).

The image is Jean de Meun at his desk, from illuminated manuscript of The Romance of the Rose, N. France, c. 1340.  Royal 20 A XVII f. 35v.  Thanks to the British Library.

Hult, David F., ed. and trans. 2010. Debate of the Romance of the Rose. Chicago: University of Chicago Press.