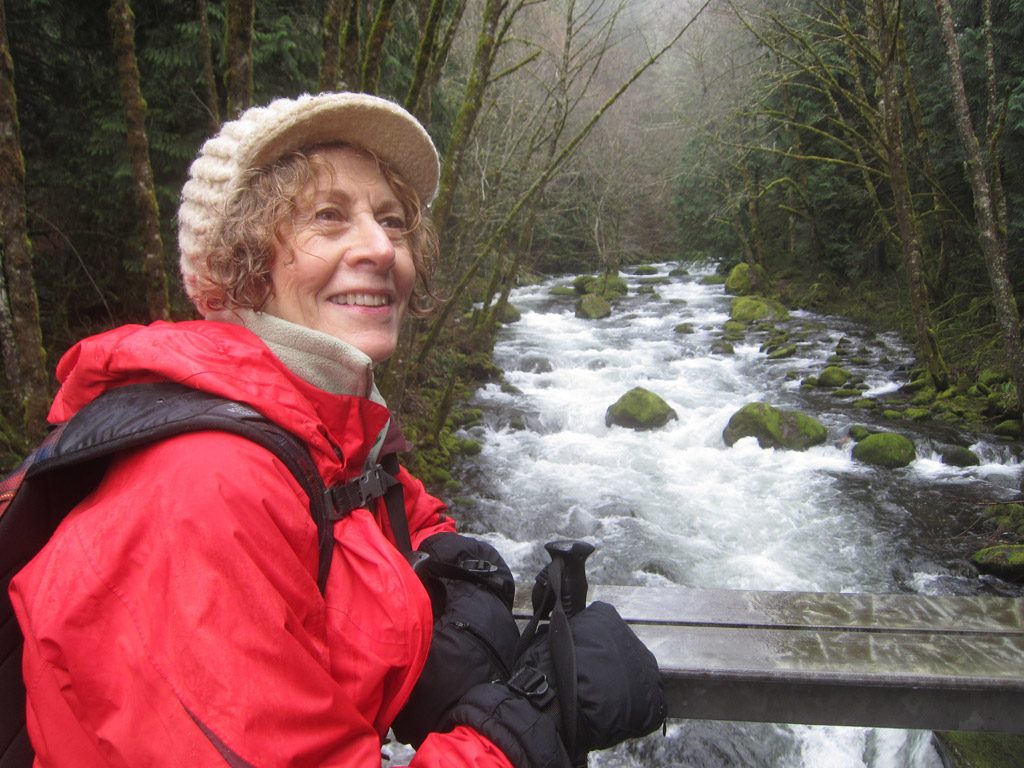 My mom unexpectedly went to the hospital on Friday evening, June 14. She unexpectedly died on Tuesday evening, June 18. At seventy-nine years young, she was in apparently good health two days before she went to the hospital. A few weeks before her death, she hiked seven and half miles up and down Dog Mountain, which she had done several times before. She told me this time the flowers on Dog Mountain were the most beautiful that she had ever seen. About two weeks before she went to the hospital, she hiked about four and half miles up and down from Angel’s Rest, which she had done before. A week before she died, she sought to send me some blue cheese that she had made. She said it was one of her best blues. But she was concerned that its quality wouldn’t hold up through the time and temperature of express mail. While I vigorously oppose gyno-idolatry, I think my mom deserves to be at an angel’s rest.

My mom expressed more interest and more appreciation for what I’ve written on purple motes than have my father and my three brothers. That’s not saying much. My mom wasn’t a literary person or a critical thinker. She believed most of what she read in “the newspaper.” She didn’t read most of what I have written here.

Occasionally I would ask my mom what she thought about one of my posts. For those seeking material to mobilize a mob to attack me, my mom said that “husbands can work with wives reluctant to work outside the home” was terrible and the most offensive writing of mine that she had ever read.

My mom’s father and mother were immigrants from Lebanon. My mom cherished her Arabic heritage. I sent her my post about the great classical Arabic poet Abu Nuwas and overcoming the poetic problem with penises and erections. She responded, “I’m not sure I got everything you were saying.”

My mom loved hiking through the mountains singing (badly) from the movie The Sound of Music. With anyone or no one walking with her, she would sing joyfully: “The hills are alive with the sound of music, with songs they have sung for a thousand years. The hills fill my heart….” I sent her my post on the philosophical and theological views of the nun Maria in The Sound of Music. She said I shouldn’t be so hard on Maria.

What about how Jephthah’s daughter treated her father? My account of the story incorporated Peter Abelard’s twelfth-century planctus. My mom knew nothing about Jephthah and his daughter other than what I wrote. My mom declared that it’s “hard to imagine that it is true.” She also conceded, “women can be persistent.” She called me on Monday evening, June 3, with her further thoughts, and her voice is preserved here. Highlights: “I’m sure you’re not going to like my attitude” and “Love you!” 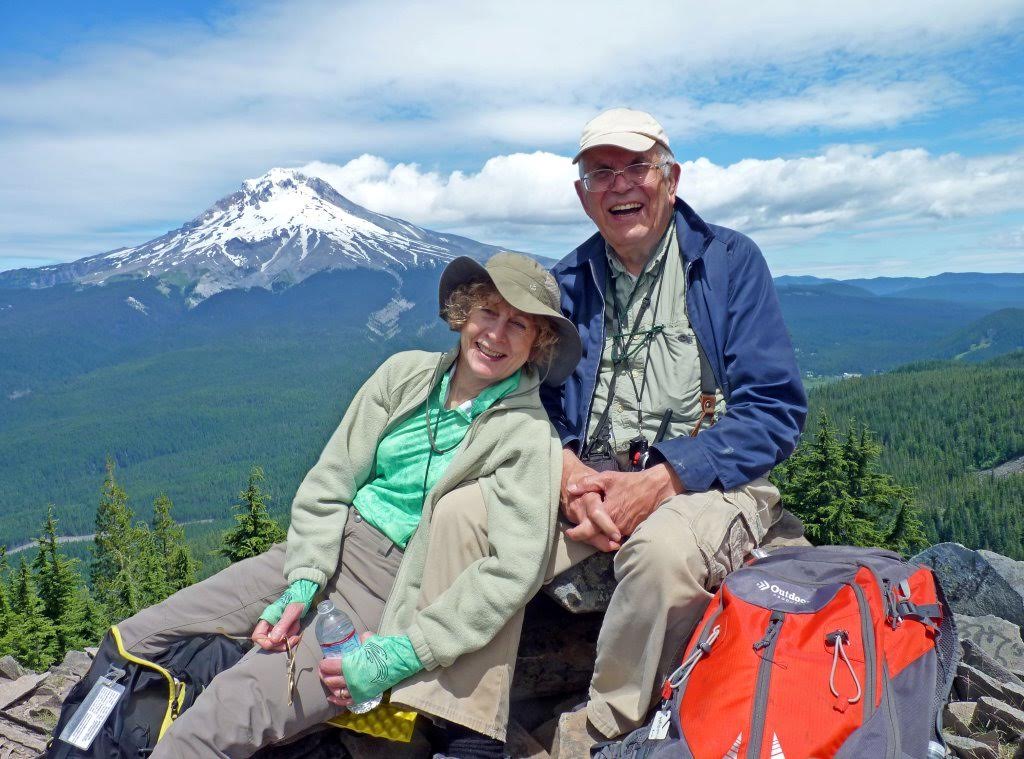 With the remark, “I think it’s important for mothers to pass on to their daughters positive attitudes toward men,” I sent my mom my post about Anne of France. My mom, who is no pushover, responded:

Did I fail to do that?

Ouch! I’m still not quite certain whether that last sentence was sarcastic taunting or heartfelt concern. Most probably it was the latter. In any case, taking no chances, I responded, “You absolutely did not fail in doing that.”

What about the Book of Tobit and Matthew of Vendôme’s reception of it? My mom responded:

A good marriage takes work and gives and takes. … I still hope that somewhere down the road you may meet someone to share your life.

To the last days of her life, my mom wanted me to get married. She believed that marriage made women and men happy. She would have loved to have had grandchildren.

At my urging, my mom watched the movie The Red Pill. She said it was informative and that she would encourage her friends to watch it. I cautioned her against upsetting her friends with these sort of issues. These sort of issues never changed my mom’s perspective on women, men, and marriage. 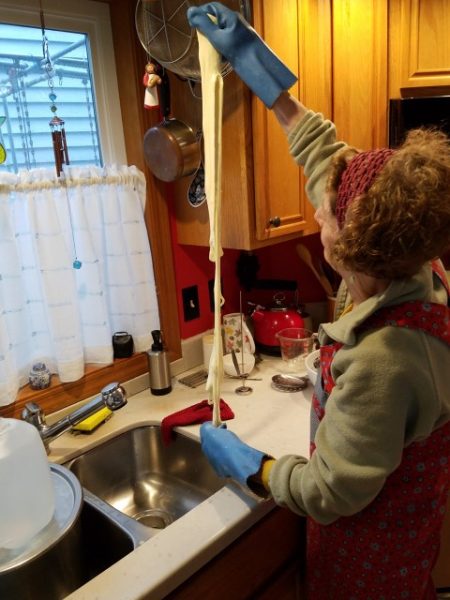 My mom was wonderfully creative. She loved art, especially art you can eat or art you can wear. In recent years she took up cheese-making. Here are the last two entries from her cheese-making diary:

166. March 14, 2019. I finally got to make cheese again, it was a long break due to holidays & illness. What makes it even more special, is the fact that it was pi day {pi is the mathematical constant 3.14159…}. I made Jim Wallace’s recipe for a Roquefort cheese & used 2 gallons of Gary’s Jersey cow milk. The total cheese weight was 2 lbs 15 1/2 oz so close to 3 lbs. I also got 6 oz of ricotta. The sides seem to compress so I will be curious as to the blue development.

167. Friday May 18, 2019. I finally got to make cheese again. We were mired in refinishing our wooden floors! I made Jim Wallace’s Toma Ossolano style cheese with 4 gallons of Gary’s cow milk. I might have dried the curds too much because my final weight was only 4 lbs 4 oz whereas Jim got 5 lb 5 oz. It will be a decent cheese but maybe a bit drier & need to age longer. I wanted a shorter age cheese to have when the boys are here this summer. I also got 1 lb & 4 oz of ricotta cheese — wow. 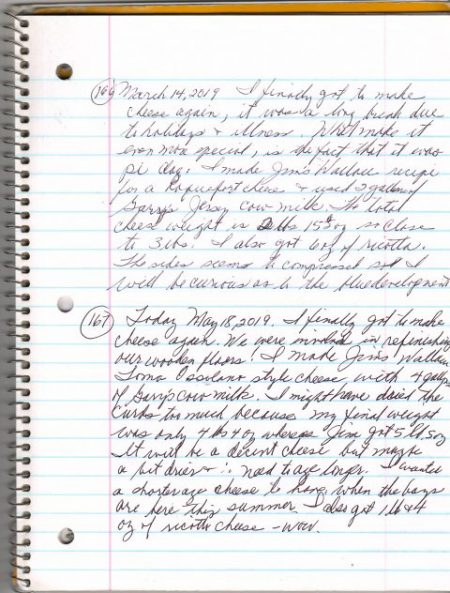 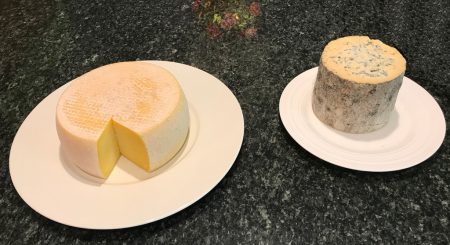 In the last weeks of her life my mom was taking a class on Mokuhanga woodblock printing at Portland Community College. She was working many hours carving a woodblock for her design of feet. For Michelangelo, fingers reaching out to touch was an image of creation. My mom lived the details of life, delighted in tending her garden, and created with her feet touching the ground. 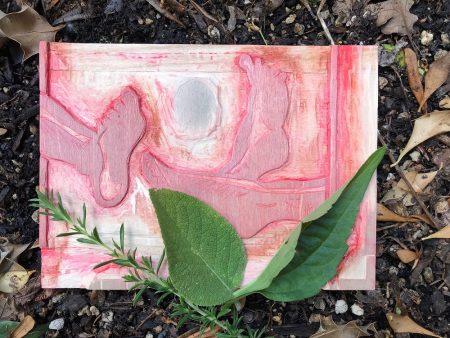 My mom didn’t have a rigidly bounded self-understanding. In a notebook forming something like a nineteenth-century commonplace book, she copied without attribution and minor differences some lyrics from a 1994 album of the rock band the Pretenders:

My mom never listened to rock music. I’m almost certain that she didn’t know of the Pretenders. Yet those words resonated with her. I’m fairly sure those were unspoken words to one of her sons. They were also unspoken words of one of her friends to her.

My mom did many things. She taught math for many years as an adjunct professor at Portland Community College. After retiring from math teaching, she worked as a teacher’s aid for immigrants learning English. Probably adapting a verbal pattern she had heard, my mom wrote of herself in her commonplace book:

I am my father’s child and my mother’s daughter. I am my husband’s wife and my sons’ mother. I am a teacher to my students and a maker of things. I am a lover of life. This is what I am but not all that I am.

My mom was a lover of life, yet she was unafraid of death. That scared me. No one can know all that any person is.

My mom loved me no matter what I wrote. Some particularly egregious posts she told me I should delete. I never said I would, and I never did. My mom had a large and generous heart. She was also good at forgetting and never demanded apologies. Formal, detailed codes of conduct don’t make for a humane world, nor do demon hunts for hate speech. Much better is for everyone to learn to cope with personally uncomfortable words that they might encounter anywhere.

9 thoughts on “my mom has died: a tribute to a dearly loved and life-filled person”