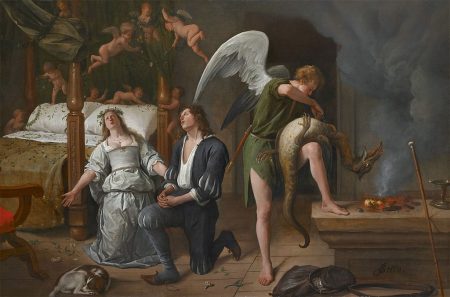 When the parents had gone out and shut the door of the room, Tobias got out of bed and said to Sarah, “Sister, get up, and let us pray and implore our Lord that he grant us mercy and safety.” So she got up, and they began to pray and implore that they might be kept safe. Tobias began by saying:  “Blessed are you, O God of our ancestors, and blessed is your name in all generations forever. Let the heavens and the whole creation bless you forever. You made Adam, and for him you made his wife Eve as a helper and support. From the two of them the human race has sprung. You said, ‘It is not good that the man should be alone; let us make a helper for him like himself.’ I now am taking this kinswoman of mine, not because of lust, but with sincerity. Grant that she and I may find mercy and that we may grow old together.” And they both said, “Amen, Amen.”

How many married couples spent their first night together like that?

Sarah, it must be said, wasn’t like most brides today. She was young and very beautiful, respected her father, and lived with her still-married parents. She had no children from previous marriages. While most brides today have been married no more than a few times previously, Sarah had already been married seven times. On each wedding night, her husband had died in the marriage bed. Reportedly a “demon” killed them. A maid said that Sarah killed them. In any case, Sarah remained a virgin.

Tobias had his own personal trauma. One night, his father Tobit slept in the courtyard with his face uncovered because of the heat. Sparrows that landed on the wall pooped. Their fresh droppings fell into Tobit’s eyes and covered them with a white film. Physicians repeatedly treated Tobit with eye ointments for the bird droppings that were obscuring his vision. He then became completely blind.[2] As most children did before recent decades of intensive public indoctrination, Tobias loved his father. He deeply felt his father’s pain as his father struggled with the hardship of being blind.

In twelfth-century France, Matthew of Vendôme clarified how Tobias differed from Sarah’s previous husbands. Given that Sarah was very beautiful, her previous husbands had understandably lusted to have sex with her:

The demon destroys those for whom fleshly delight,
not offspring, urges the taking of her virginity.
Whoever delights, like a horse or a mule, in abusing
marriage, perishes, overcome by love of the flesh.

Tobias, in contrast, loved Sarah in accordance with medieval ideals of gender equality:

Like beauty blesses the pair alike in mind; a like grace of
customs, accordant wishes, and love of the same faith bless them.
A marriage is happy, a bond is equal, when they are united together
whose religion is the same, race is the same, faith is one.
The two are equals; the likeness of mind refuses to make unequal
those whom equality of looks and age make equal.
A chaste girl weds a pious husband, a faithful wife weds a law-abiding man,
a man worthy of the wife, a girl worthy of the husband.

Sarah was not only young and outwardly beautiful, but she was also beautiful in personal character:

Beyond her feminine sex, the young maiden flourishes
in good morals, a rare crop in a delicate bosom.
She strives to be pure and decent; her beauty to purity,
just as her purity to beauty, is eager to unite itself.
Sweet in conversation, succinct in speech, modest in
appearance, lacking in guile, obliging in gifts,
temperate of soul, free of rambling discourse, unknowing of
pride, pleasing in her practical simplicity,
her brow bears arms excluding favor
forbidden, her beauty refuses to favor Venus.
Her beauty swears an oath of peace with purity; and the enemy
being usually present, it is eager to perpetuate trust.
The woman couples being law-abiding, capable, pious, beautiful, and modest.
She thus binds opposites that are eager to flow away.

Tobias married Sarah, not because of lust, but because she was a good woman with whom to beget children and to glorify God. According to Matthew of Vendôme, Tobias on his wedding night prayed:

May everything bless You, Almighty God. May fire,
water, air, and earth show their praises.
It pleased You to fashion our first parent from the mud
of the earth; he was alone, without offspring.
Your ordering determined that Eve be joined to him as a
companion; from this our race proceeds.
So unite us, so strengthen the covenant of our
marriage, so may You wish us to bear fruit.
Let not the wantonness of Venus stir us, but
children, but the love of offspring.
May harmony of lawful sentiments unite us and befriend us,
not bound by the robber of modesty, eros.
Give us offspring, I beg, who will strive through successive
ages of the world to extol Your glory.

According to Matthew of Vendôme, Sarah added the prayer to God:

God, have pity, I pray, have pity on the two of us,
so that we might be allowed to grow old together.

Drawing upon medieval Latin literature’s great appreciation for the power of women, Matthew of Vendôme allowed Sarah to conclude with the most important prayer for the couple. Sarah and Tobias had many children.[6] They didn’t impoverish themselves and traumatize their children by having lawyers fight for them a long, bitter divorce. They didn’t even get divorced. They grew old together.

Marriages today aren’t like that of Sarah and Tobias. Many marriages weren’t like theirs even in the twelfth century. Matthew of Vendôme griped:

How much the beauty of the previously described marriage stands apart
from marriages of today! What bed is without stain?
…
What woman weds, what man now takes a wife for love of
children? Who refuses to be Venus’s armor-bearer?

Being Venus’s armor-bearer means fighting with the aim of gratifying lust. That’s not what marital wrestling typically is like. Marrying under the false belief that marriage provides ample, lustful sex is like buying a plane ticket to get the free packet of peanuts aboard the flight. Many men and women throughout history haven’t understood, to their great sorrow.

The Book of Tobit has delighted and instructed readers for more than two millennia. It includes sensational stories of husband-killing and bird-poop blindness. Yet the most impressive part of the Book of Tobit is more subtle. Readers have been deeply moved by Tobias and Sarah being destined for each other, by Tobias declaring that he married Sarah “not because of lust, but with sincerity,” and by his praying that he and Sarah would grow old together.[7] In twelfth-century France, Matthew of Vendôme described how special Tobias and Sarah were. Nonetheless, many couples romantically in love today still imagine themselves to be in part like Tobias and Sarah.

The charming double “amen” that concludes Tobit 8:8 is best understood as a mimetic representation of Tobias and Sarah praying together. Translating those double speaking voices into linear narrative text may have been a matter of some uncertainty. The Greek I text has only a single “amen.” See Di Lella (2007) p. 469, column 2. The Tobit of the Vulgate, Jerome’s Latin translation of the fourth century, doesn’t have any “amen” concluding the wedding-night prayers. Jerome made his Vulgate translation of Tobit from an Aramaic (Chaldee) text. A double “amen” subsequently become common, but not as a creative literary device.

The Book of Tobit isn’t included in the Jewish biblical canon. The Roman Catholic Church and the Eastern Orthodox Church, for which the Septuagint formed the basis for the Old Testament canon, include the Book of Tobit in the Bible. Most Protestant churches exclude it.

[2] Disparagement of physicians has been prominent for more than two millennia. Jesus was figured as a good physician. Anti-medical satire continued to be prominent in the Middle Ages.

The Vulgate, but not the Greek sources of Tobit, includes the metaphor of the lustful husband having sex like a horse or mule. Just as in Tobias, the angel Raphael advises three days of sexual abstinence beginning from the wedding night. Vulgate Tobit 6:16-22.

Patrologia Latina 205 is available online via the Internet Archive, while the base text from that source is available in a machine-readable version via Corpus Córporum: repositorium operum Latinorum apud universitatem Turicensem. The currently best Latin text of Tobias is Munari (1982). That text isn’t available even in many high-quality libraries. I thus wasn’t able to consult it. Here’s an online digital reproduction of a fourteenth-century manuscript of Tobias (Lewis E 154 Tobias, from the Free Library of Philadelphia collection, hosted by the University of Pennsylvania).

[4] According to Matthew of Vendôme, Tobias’s father similarly married for love of offspring and had a marriage of gender equality:

Lest he might have more women, like a stud, Tobias
chooses Anna to be the sharer of his bed.
Not by the inducement of Venus does he take a wife, but
for the love of offspring; he loves to be fruitful to God.
The young man’s license is curbed: a prudent bride
is given to a just groom, an equal to an equal.
Virtue is glad to marry virtue, honor rejoices
to be the companion of equal honor.
The joining of good people is more harmonious and agreeable;
a flower is more pleasing with a flower, color with color.

[5] Matthew of Vendôme followed the Vulgate’s structure for the prayers of Tobias and Sarah, including having no ending “amen.”

[7] Both ancient Greek texts of Tobit declare that Tobias and Sarah were destined for each other. The angel Raphael tells Tobias:

she was set apart for you from before the world existed. You will save her, and she will go with you.

Tobit 6:18, Greek text from Codex Sinaiticus, English translation from the New American Bible, Revised. Tobias, following the Vulgate, doesn’t include this declaration, but has the angel Raphael assure Sarah’s father:

Believe me, your daughter is reserved for this youth; she alone
owes the treasure of her virginity to him alone.