Humans universally seek material goods and social status.  Those interests are particularly problematic in professional care for the sick.  A physician too interested in earning money by caring for the sick doesn’t truly care for the sick.  Expert knowledge of a physician can help the sick, but using the sick to display one’s knowledge is inhumane.  Under-appreciated medieval anti-medical satire attacked physicians who lost their moral balance. 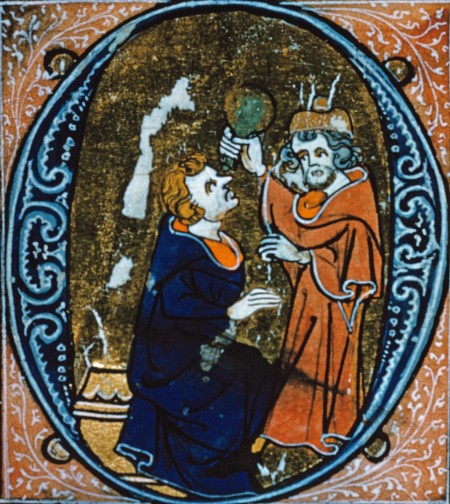 Some medieval criticism of physicians simply concerned treatment effects.  A Latin poem from twelfth-century France addresses “false doctors.”  It ends with these couplets:

My intestines are tortured, because they are filled with bile and mud.
I drink bile, I eat mud at the doctor’s behest.
This potion of bitter dregs may be the cause of my death,
but may he perish through it because he causes me to perish! [1]

In medieval medicine, bile was a natural bodily humor than needed to remain in balance.  A type of earth (terra sigillata) was ingested medicinally.[2]  Here bile is being drunk and the medicinal earth is mud.  “May he perish through it” seems to refer to the physician dying in a decision of fate by a goddess angry with the physician’s faulty treatment.[3]  The poem criticizes the “false doctor” for causing, rather than alleviating and preventing, pain and death. A twelfth-century Latin comedy declared:

This is the result of medical practice: if you feel ill,
go to the doctor, and soon you will be sick.

In a French farce written in 1457, a play-acting patient criticizes an imaginary physician:

These doctors are killing me with their drugs.

What about these three sharp objects you gave me, doctor, do you call those pills?  They nearly broke my jaws.  Don’t make me taken them anymore, for pity’s sake.  They were so bitter I threw them up. [5]

Doctors probably had a weaker presumption of effectiveness than did persons offering simpler, everyday services like wagon transport.  Criticisms of physicians’ ineffectiveness gained potency with claims of unnecessarily causing pain and ultimately killing the patient.

They come to the patient with their lies and their boldness, with their cunning speech and shameless falsehood.  They gaze into his face, and open his eyelids, and remove his fingernails to cause him to fear and tremble and to hasten the day of his doom.  Then they take a beaker of his urine, raise it in their hands until it reaches their beards, and shake it violently to make the water turbid.  They then say, “This is the gravest of diseases.”  But they know nothing except that it is urine, for its odor has reached their nostrils.  Then they say to his kinsmen, friends, and neighbors, “This malady is unknown to many physicians.”  They thus scare and confuse them.  Then, standing about the patient, they sigh deeply and say: “Save yourself from being entombed in the rocky earth; hurry! give! give! don’t spare your silver and gold so that you may deliver your soul from destruction and your body from the valley of the shadow of death … Give us your silver and your gold, and then we will remove the disease from within you. [6]

Don Maimon Galipapa, a Spanish Jewish physician writing in the later part of the thirteenth century, describes physicians’ practices with a parody of Hippocrates’ aphorisms.  Galipapa has Hippocrates, the enemy of worthless physicians, declare:

The foundation of medicine was brilliant wisdom and its ways were upright.  Recently, however, new people have come; the present doctors, who have learned little, boast: “We are wise and know all the secrets of science,” but they are ignorant and empty-headed.  They only take the gold, the silver, the coin.  They corrupt and do evil, but how to do good they know not. …

Concerning the color of the patient’s urine, the fool will speak deception and falsehood and will tell many lies.  He will ask to look at the color, to determine whether the sickness is in the body or in the bones, for his waters deceive not.  He shakes the urinal.  He see whether the sediment is above or at the bottom, and whether it is red.  When its appearance is red, he will sentence death, and he will look at it with sadness.  But if it is white and cloudy, he will likewise say there is no hope. [7]

Another general remedy for all diseases:  Let there be taken the mouth of a serpent, the noise of a storm, the blackness of an Ethiopian, the whiteness of women, oil of quarrel and contention, from each one-half measure; the tail of a lizard, the twittering of birds, the base of a camel’s hump,  the wings of flies, and the brain of a flea, and a whole fat tail, and the blossoms of shame and reproach.  This you must cook.  Boil it in presumptuous water, with the eggs of lice, from each two kinds, in a boiling kettle full of crushed things.  It shall be kept boiling until the water turns to vapor.  Let the sick drink it in the evening, morning, and noon.  Whether the patient will find a cure for his malady in the end will show, especially after his death. [8]

May God, who condemns to the abode of the dead and exalts to life, punish them for their waywardness and deceitfulness.  May He plague them with the plague sent to the Egyptians and with hemorrhoids until their bowels come out of their behinds.  For that science {medicine} which is exalted above all sciences, for which neither pearls nor coral are a worthy exchange, whose price is above rubies, they have made as if it were the value of a fig tree. [9]

Be a physician, said Time to the fool,
and murder men in exchange for a fee;
you’ll have it better than the angel of death,
who has to kill them for free. [10]

Jews brought advanced medical knowledge from the Islamic world to western Europe through Spain.  Ibn Zabara and Galipapa both were Spanish physicians.  They knew well the profession that they criticized.

Pre-modern anti-medical satire functioned as moral regulation of physicians, practical warning to patients, and entertainment for readers.  Medicine is a morally and practically difficult profession.  Deference to formally scientific knowledge has tended to suppress reasonable skepticism of medicine.[11]  Yet historical failings in the medical profession are relevant to current medical practice.  Monetary greed and arrogant pretense of knowledge remain alluring vices for physicians professionally caring for the sick.

[1] From Carmina Houghtoniensia, poem incipit “Ne uetitis cenis inhiet gula, comprime frenis!”  Latin text and trans. Ziolkowski & Balin (2007) pp. 26-7.  Above I have presented the alternate translation of the last line given in id. p. 28.  The given translation of the last line is “but may it perish, because it causes me to perish through it.”  That seems to me to make less sense in the poem’s context and in the context of medieval anti-medical satire.

[2] References to medicinal earth appear in the Arabic life of Buddha and the subsequent Georgian Christian adaptation.  For discussion and further reference, see note [5] in my post on physicians and medical treatments in the life of Buddha.

[6] Joseph ben Meir ibn Zabara, Sefer Shaashuim (Book of Delight), from Hebrew trans. Hadas (1932) pp. 141-2.  While Sefer Shaashuim seems to have been popular, entertaining reading, Hadas translated it into archaic English.  I’ve modernized the translation and made it more easily readable.  The biblical language in the direct speech of the physician seems to be a parody of a Hebrew literary style.  Ibn Zabara doesn’t generally use quotations from the Hebrew Bible.

[7] Don Maimon Galipapa, Ma’amarei ha-Rofe’im (The Physician’s Aphorisms), Ch.1. paras. 3, 6, from Hebrew trans. Friedenwald (1918) p. 68. Galipapa also wrote the satires Neder Almanah (The Widow’s Vow) and Midyenei Ishah (Contentions of a wife / The hen-pecked husband). Those are within the genre of the literature of men’s sexed protests.  Davidson (1904) provides the Hebrew text for all three satires.  On the attribution of the satires to Galipapa, see Davidson (1914) pp. XCIX-CI.

A philosopher was sick unto death, and his doctor gave him up; yet the patient recovered. The convalescent was walking in the street when the doctor met him. “You come,” said he, “from the other world.” “Yes,” rejoined the patient, “I come from there, and I saw there the awful retribution that falls on doctors; for they kill their patients. Yet, do not feel alarmed. You will not suffer. I told them on my oath that you are no doctor.”

The learned scholar Saint Jerome reportedly declared: “where there are doctors, there are many deaths {ubi medici, ibi multae mortes}.” I haven’t been able to locate this phrase in Jerome’s works.

[11] Carlino (2005) observes that the history of medical skepticism has largely been ignored and provides an analysis of Plutarch’s Invective contra medicum and its historical influence.  Doctor Skeptic provides an insightful perspective on current medical practices.