Buddhas have long been regarded as great physicians.  As stories of the first Buddha’s life disseminated from central Asia westward and became the story of Barlaam and Josaphat, they incorporated references to physicians, sickness, medical treatments, and healing.  These references moved fluidly between technical medical terminology and abstract spiritual metaphors. 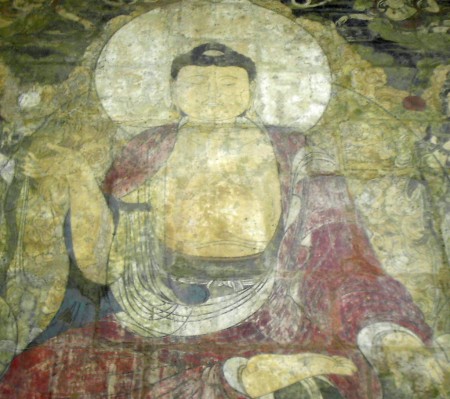 Early Buddha sutras gave healing powers to a person acting by oneself.  Elite, sophisticated physicians in the ancient world imposed complex treatments on their patients and amassed enormous wealth.  Jesus of Nazareth, who came to be regarded as a great physician, cured patients at no cost with only his touch or his word.  Buddhas took a similar position to Jesus in the ancient medical market.  Buddhas, however, had an additional competitive advantage: the healing power of a Buddha did not require the Buddha’s personal presence, or even the presence of a holy disciple of the Buddha.  In a medicine Buddha sutra written no later than the seventh century, Medicine Master Lapis Lazuli Light Tathagata vowed:

in the future, when I attain perfect enlightenment, sentient beings afflicted with various illnesses, with no one to help them, nowhere to turn, no physicians, no medicine, no family, no home, who are destitute and miserable, will, when my name passes through their ears, be relieved of all their illnesses. [1]

To have the name of Medicine Master Lapis Lazuli Light Tathagata pass through one’s ears requires only the sick person to say that name.  Medical treatment via a Buddha is a matter of personal, willed activating of the Buddha’s medical powers for oneself.

An early Arabic intextualization of the first Buddha’s life gave considerable importance to corporal reality and a physician’s professional knowledge.  The Arabic text seems to have been written by an Ismaili (person following a branch of Shia Islam) in central Asia in the second half of the eighth century GC.  It includes an account of a “skilled physician.”  The skilled physician diagnoses a bodily condition and understands bodily effects of medicinal substances:

The skilled physician, when he sees a body debilitated by corrupt humors, and he wants to strengthen it and give it more mass, he doesn’t give it at first nourishment that produces flesh and force, knowing that the introduction of nourishment to corrupt humors brings it neither benefit nor strength.  But he gives it at first medicine, by which he diminishes in it the corrupt humors, and purifies the vessels and veins of the body.  Once he has finished this, he begins to give it nourishment and drink that suits it.  Only then the body feels the benefit of nourishment, gains flesh and fat, and increases in strength. [2]

The physician’s description of the patient is impersonally physical: body, flesh, fat.  Humors, vessels, and veins are technical medical terms.  The Arabic text implicitly recognizes that curing illness requires more than spiritual enlightenment.  In this text, curing illness is a physical matter that requires material substances and the professional skills of the physician.  That shift from word-power medicine in the Medicine Buddha sutra to external bodily interaction is consistent with a more general shift to an external transforming agent in the early Arabic life of Buddha.[3]

An early Christian intextualization of Buddha’s life shifted emphasis from the corporal body to God.  The early Arabic Buddha’s life was adapted into Georgian by a Christian probably early in the ninth century.  This adaptation eliminated technical medical terms and added deference to the will of God in healing:

When a skilled physician sees a body deranged by grievous ailments and wishes to restore it to health, he does not attempt to build up the flesh by gorging it with food and drink.  For he knows that if food and drink are mixed with the corrupt humours, they would disagree with the system and harm the body rather than doing it any good.  But those through whom God in His providence operates the conquest of disease will rather impose a regime and administer medicine.  As soon as the distemper and the corrupt humour have been expelled through God’s grace, then it is that they will nourish the patient with food and drink; and straightway the palate will acquire a relish for good cheer, and he whose death God wishes to avert will be restored to health. [4]

Immediately following this account is an ascetic’s account of how he escaped from absorption in worldly life.  The early Arabic source, in contrasts, at this point goes on to analogize the treatment of the body to skilled preparation of a field for cultivation.  The early Georgian Christian adaption shifted away from the material world, but not toward Buddha’s self-willed transcendence.  The Georgian Christian adaptation brought forward dependence on God, an external transforming agent, for liberation from worldly burdens.

The Georgian Christian adaptation’s closer association of physician and God also appears in the ascetic’s claim to be a physician.  In both accounts, the ascetic functions as a guide for Josaphat Buddha in his transformation.  To get from Josaphat Buddha’s tutor access to the secluded and not yet transformed Josaphat Buddha, the ascetic claimed to be a merchant with a special jewel to offer.  In the early Arabic Buddha’s life, the ascetic described the special jewel as having extraordinary powers.  The Georgian Christian adaptation expanded those powers to describe the jewel implicitly as a transformative encounter with Jesus:

The treasure I possess is finer than red brimstone, since it restores sight to blind men’s eyes and hearing to the deaf, makes the dumb speak, cleanses the lepers, causes the lame to arise and walk, strengthens the ailing, enriches those that are in want, and cures all ailments; it grants victory over the foe, drives out devils from the possessed, and furnishes a man with all his heart’s desire. [5]

In the early Arabic Buddha’s life, the account of the skilled physician provides a worldly, analogical justification for asceticism.  The influential late tenth-century Greek Christian adaptation of the early Georgian Christian text eliminated the story of the skilled physician.[7]  Christians had no need of a physician skilled in Greek medicine to justify other-worldliness.  Jesus, understood as the perfect physician among ancient Christians, provided sufficient authority for Christian other-worldliness.

[5] Id. p. 71.  At the corresponding position, the earlier Arabic Kitab Bilawhar wa-Yudasaf has the ascetic-merchant declare:

My {special} ware is better than red sulfur: it gives sight to the blind, it heals illnesses, it makes the deaf hear, it strengthens the weak, it protects against madness, it gives victory over the enemy.

From Arabic trans. into French, Gimaret (1971) p. 83, my translation into English.  That this text invoked Jesus for the Georgian Christian adaptor is apparent in the ironic depreciation that the adaptor adds to the response of Josaphat Buddha’s tutor to the Jesus-based expansion of that text:

You do not look a fool to me, O stranger, though your words sound like the prattle of some loquacious babbler.

[7] St. Euthymius the Georgian adapted the early Georgian Christian version into Greek about 980 GC at Mount Athos. St. Euthymius’ Greek text eliminated the physician and patient fable, the amorous wife (chivalric warrior) fable, and the fable of the dogs and carrion.  See Encyclopedia of Islam, 2nd ed., entry for Bilawhar Wa-Yūdāsaf, Table 2, for comparison of the fable contents of early versions of Buddha’s life.  All three of the eliminated fables are quite worldly. St. Euthymius’ Greek text was translated in Latin in 1048 as part of Beati loannis Damasceni Opera.  That Latin text was the source for subsequent Barlaam and Josaphat texts popular in European vernaculars.