Starting about 1800 years ago, stories of the life of Buddha diffused from Sanskrit texts in India, into Manichaean texts in central Asia, then into Middle Persian, Arabic, Hebrew, Syriac, Georgian, Greek, and vernacular languages across western Eurasia and northern Africa.  A Georgian version probably from the ninth century was the source for a late-tenth-century Greek version that subsequently diffused widely in Christian circles.  The Buddha became re-interpreted and re-incarnated as the Christian Saint Josaphat. In the early, influential Georgian Christian version, Josaphat Buddha established a distinctive reign of justice in half of his father’s kingdom.  Josaphat Buddha began this new reign of justice with care for prisoners. 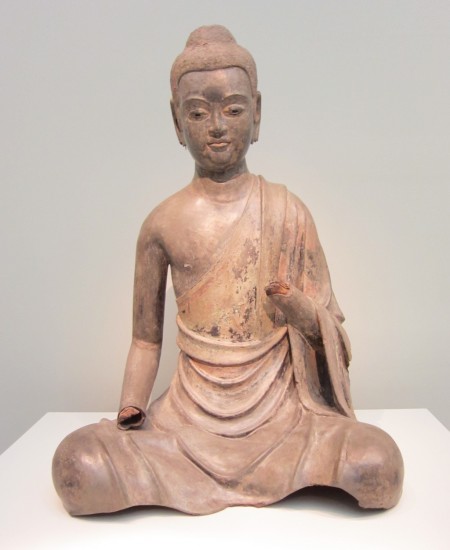 In Josaphat Buddha’s farewell audience with his father-king before journeying to his new kingdom, Josaphat Buddha requested that all his father’s prisoners be released to him.  Josaphat Buddha forgave the taxes owed for prisoners held for unpaid taxes.  He paid the debts of persons imprisoned for debts to others.  Those prisoners were thus free.  For prisoners “detained for acts of wickedness and murder,” he allocated sufficient funds “to provide for them amply in prison until God’s will might be made known as to what their fate should be.”  After caring for prisoners, Josaphat Buddha cared for others worthy of compassion: “he ordered great quantities of treasure to be distributed among the disabled, the poor and the feeble.”[2]  Only after these acts did Josaphat Buddha set off for his new kingdom.

As a ruler, Josaphat Buddha favored just acts over fine words.  He explained:

no one is better entitled to address his subjects with words of mildness than a king who goes among his people administering justice with equity. … But if there is one placed in authority over the people, a man merciless, bloodthirsty and rapacious, then he too will have recourse to honeyed words whereby to disguise the wickedness of his acts. Again, if some ignorant novice should succeed to the throne, he will use them to conceal his incompetence until he shall have mastered the art of government. But he who diffuses justice among the people and administers their affairs well, not robbing the honourable of their honour nor the weak of their just deserts, a man who sharpens the sword of justice for the defence of the entire nation—such a one as this has no need to resort to the use of fair words. I for my part have come among you to excel not by my eloquence, but by executing righteous justice.

{he} selected a place of modest appearance, neither a royal palace nor a poor man’s cabin, and ordered it to be made ready for his occupation; and he had it furnished in a style neither majestic nor mean

He had “steeds and garments, decorations for thrones, and many kinds of royal adornments” sent far away to be sold off.  He distributed the proceeds to the needy. However, he did not just provide gifts to the needy.  He helped them to become self-sufficient:

He helped them to build themselves farms and provided them with the necessary seed corn, until he succeeded in abolishing poverty and misery altogether. Thenceforth everyone became prosperous, for which they glorified God with united voice; and there was not a single man to be found in Iodasaph’s {Josaphat’s} domains who needed to go begging for his daily bread or for alms. [3]

The kingdom became prosperous and populous.  The superiority of Josaphat Buddha’s way was clear to see.

[1] Plot overview of The Balavariani, from Georgian trans. Lang (1966), pp. 122-154.  In its introduction, id. describes the story’s source in accounts of the life of the Buddha, the development of an Arabic version, Bilauhar and Budasaf (Bilawhar wa-Būdhāsaf), and the diffusion of Christian versions that came to be called Barlaam and Josaphat.  Here’s more on the textual history of Barlaam and Josaphat.

[2] Id. p. 154 (sec. 52).  The source for the Georgian version seems to have been the Arabic non-Christian work Bilauhar and Budasaf.  For a modern French translation, Gimaret (1971). Bilauhar and Budasaf does not include Josaphat Buddha’s acts of mercy for prisoners.  The translation of the Georgian into Geek, mistakenly attributed to John of Damascus, re-ordered and abbreviated Josaphat Buddha’s worldly compassion:

After this he searched the prisons, and sought out the captives in mines, or debtors in the grip of their creditors; and by generous largesses to all he proved a father to all, orphans, and widows, and beggars, a loving and good father, for he deemed that by bestowing blessings on these he won a blessing for himself.

[3] Id. p. 154-5 (sec. 53), p. 155 (sec. 54) (previous three quotes above).  Corresponding text doesn’t exist in the Arabic Bilauhar and Budasaf.  The concern for just acts rather than eloquent words and modest royal accommodations contrasts with practices in the Abbasid court.  That implicit contrast suggests plausible circumstances for writing the Balavariani and the above text in particular: about the time of Ashot I‘s ascension to the throne of Iberia in modern-day Georgia in 813.