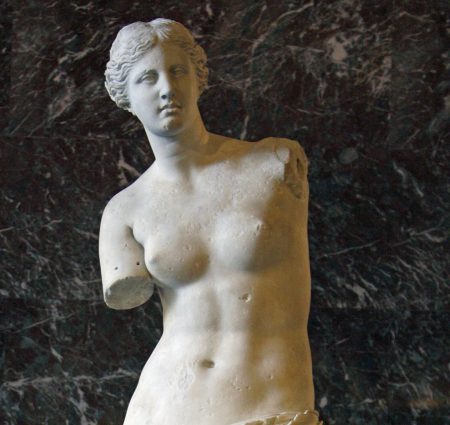 A delicate and vulnerable young woman, Venus, also known as Dione (“Divine One”), appealed to Paris for help. Juno had sharply criticized her. Minerva had been mean to her. Venus implored:

If the Divine One is faithful, understanding and cruel to no one,
consider what misfortune presses on my case, from where comes the tumult,
the threats! Since the first light of the sunrise on my going forth,
I have warmed man, tenderly consoling him through his hard labors,
and sympathizing with his grave misfortunes. Thus in gratitude
men have built for me public temples, and their incense I have deserved.
This is the cause for the goddesses’ anger and hatred. Have pity on me, at least
you, to whom I am driven in exile. Accused by the heavens I appeal to the earth,
which I honor; peoples, defend your fellow citizen!

Venus was well-known to be an earthy goddess. She was deeply engaged in the fundamental work by which human life continues.

Minerva, in contrast, frivolously engaged in fictions of poetry. Venus spoke simply and truthfully about Minerva:

“She is credited with being called the greatest of the Muses.”
That I don’t deny, for she’s truly second to none in the art of fabricating;
she teaches fiction-writers her schemes, teaches them to exploit weak ears
and to lead blind senses to the frivolous.

Many scholars in the humanities today foolishly follow Minerva rather than Venus. Those scholars write about trivialities instead of writing almost exclusively about what’s most important: sex.

Venus boldly challenged the dominant ideology that imagines glory in violence against men. Minerva, also known as Pallas Athena, was the first woman warrior to receive the epithet “bright-eyed {γλαυκῶπις}.” Venus argued that Minerva deserved little credit for this first for women:

Let her, victorious,
carry standards dripping with gore; our triumphs are without killing.
Or am I being tormented because I don’t fight my nature?
If I was alluring to Anchises, did I betray my sex?
If I gave birth, whom did I harm? My Cupid dwells in the stars,
your Aeneas in Phrygia: so where’s the fault?
Venus thus strives to destroy the gods and the world?
Offspring such as these I bestow upon men and gods. Thus unmarried Pallas
would criticize the morals of meritorious Venus? Is she beloved,
beloved among men, whom war destroys? Is she revered among girls,
whose gender she disdains?

“But she is a virgin.” Aglauros says no, the enclosed serpent says no.
Nonetheless I keep silent about that. “But she has a beautiful face.”
The water’s wave expressly cries out to the contrary.
“But the ghostly Gorgon’s head from Perseus’s victory
has wrenched away titles and honors from cowardly Olympus.”
So Pallas says about herself. So it’s proper to believe.

Venus then turned to the case of Juno, the wife of Jove. Like Venus’s husband Vulcan, Juno was a jealous spouse. Her jealousy was associated with considerable ugliness:

Of being harmed by fate I have no complaint; my fear is divine
jealousy. Semele conceived under a favorable star.
Pregnant by a god, she was going to give birth to a god. Through ten months
her pregnancy swelled, when Juno, disguised as an old serving woman,
arrives, persuades, and leaves. Why did that credulous, simple,
unknowing Semele press upon Jove with an oath? From this perspective,
Cadmus, your faith, through such a long way of a year, deserved
this mistake? With the abduction of your sister, you were arranging
to reconcile Jove with the abandoned Juno. Behold, with grief
Juno rewards you and attacks your children with lightening.
Let her rejoice, look with what a triumph the wrinkled deity
strives for glory! While her weapon is a trembling walking-stick,
she feigns a nurse’s faith. No work was necessary to
confabulate the rest. White hair comes easily to her temples,
and wrinkles to her face. She had to hide her senility,
not make a pretense of it. O, if in this beauty contest
that powerful fake-nurse Beroe were standing alongside the Divine Venus,
her ape-like appearance would impel a famous laughter!

Venus believed that a husband like Jove, with an old, ape-like wife, was likely to stray and even to commit a terrible crime:

Agenor, you fool, why do you seek Europa back from the begettor Jove?
She deserved to be seized. The abduction is excused by his need
and her more able marital love-making. Jove’s wife should blame herself
most of all for frequently being widowed. She would have had a more auspicious
and stable marriage-bed if the first wedding-contract had brought forth
more beauty and less talk. A shameless, despicable,
garrulous woman causes her lover to violate proper morals.

Men throughout history has commonly been punished more severely for adultery than women have. Venus asserted that women bear responsibility for adulterous affairs, just as they do for violence against men. Venus has long been recognized as a goddess of love. Juno, in contrast, had a cold and distance marriage. Minerva was a virgin, career-woman. Venus’s wisdom about women, men, and love should be taken at least as seriously as that of Juno and Minerva.

Venus had keen understanding about how a woman can please heterosexual men. She appealed to Paris:

“What can riches, kingdoms, and arms add to the life
of a strong man, whose kingdom is greater than half the world,
whose riches are Phrygia, and whose strength is the Trojan people?
But if the comforting of a royal marriage-bed is lacking,
if strength, if scepter are nothing without the experience of having a wife,
then have Venus’s gift, a gift that Sparta proudly holds,
a gift that Juno would like to be called, and Minerva to be!
Why delay? Come closer to probe Dione’s inners;
the thing is to be handled openly. Now we uncover our naked breasts.
With this face I guide Phoebes among the stars,
with this appearance I lead forward the dawn. Beautiful judge,
reward the deserving and the similar, do not despise my appearance!”
So saying, she seizes and pulls off her mantle and reveals her cheeks
and her naked shoulders. Exposing her hollow, the day rose fully
in the opening. The other goddesses shamefully yielded the triumph to Venus.

The other goddesses were ashamed for not understanding what men seek. Venus loved men, and men loved her. Not surprisingly, Paris choose Venus as being more beautiful than Juno and Minerva.

Paris’s choice of Venus led to the deaths of many men in the brutal violence against men of the Trojan War. Today, the Judgment of Paris illustrates the grave public offense of gazing upon a beautiful woman. Within the logic of contemporary gynocentric myth-making, the Trojan War is best understood as collective retribution that men rightly suffered as a consequence of Paris favoring the beautiful, naked Venus.

The quotes above are from Joseph of Exeter’s twelfth-century epic poem, Ylias Daretis Phrygii {Iliad of Dares Phrygius}, also known as De Bello Trojano {About the Trojan War}.

7 thoughts on “men-loving Venus victorious; she shames Juno and Minerva”