Agents of ignorance and bigotry have created a myth of medieval European sexual repression, and even worse, misogyny. In fact, medieval literature describes men’s passionate desire for women and the joy of heterosexual intercourse. Medieval men’s ardent desire for women led some of them into servitude to women and effectively sexual feudalism. Medieval men could buy sex from a variety of women. Some clerics advocated for clergy having multiple concubines. Nonetheless, popular medieval wisdom, without referring directly to Christian teaching, taught men to settle for having sexual relations with just one woman.

In human affairs no other matter is such as this:
if there is a young woman beautiful in all ways,
she makes herself pleasing so that many men compete to obtain her.
If she perishes, what will there be that any man wishes to love?
Neither gold nor gemstones will please, royal purple cloth will fade,
a man will even be despised and will regard himself as shameful.
She gives value to the things we hold in esteem:
she herself pleases, and nothing else pleases from its own merit.

Men typically buy expensive jewelry, seek high-status positions, and engage in violence against men in large part to impress women or to please women. The aggressive, laborious, and dangerous masculine drive to be a “big man” has evolutionary roots in men’s desire to obtain women’s favor. Such reality can scarcely be described in our repressive and doctrinaire age.

The clerical text praising women introduced a special clerical claim to women. According to this text, the goddess Venus gave all the beautiful women to the clergy, regarded as men worthy in appreciating divine gifts. She gave merchants and soldiers no woman — nothing but the worldly evils associated with their professions. She told monks to keep chanting “Lord have mercy {kyrie eleison}” and to enjoy nothing but salty beans. Like men deprived of mercy from women, the monks wept inside their cloisters. If you believe in the goddess Venus, the clergy having all the beautiful women was the divinely ordained medieval distribution of women. 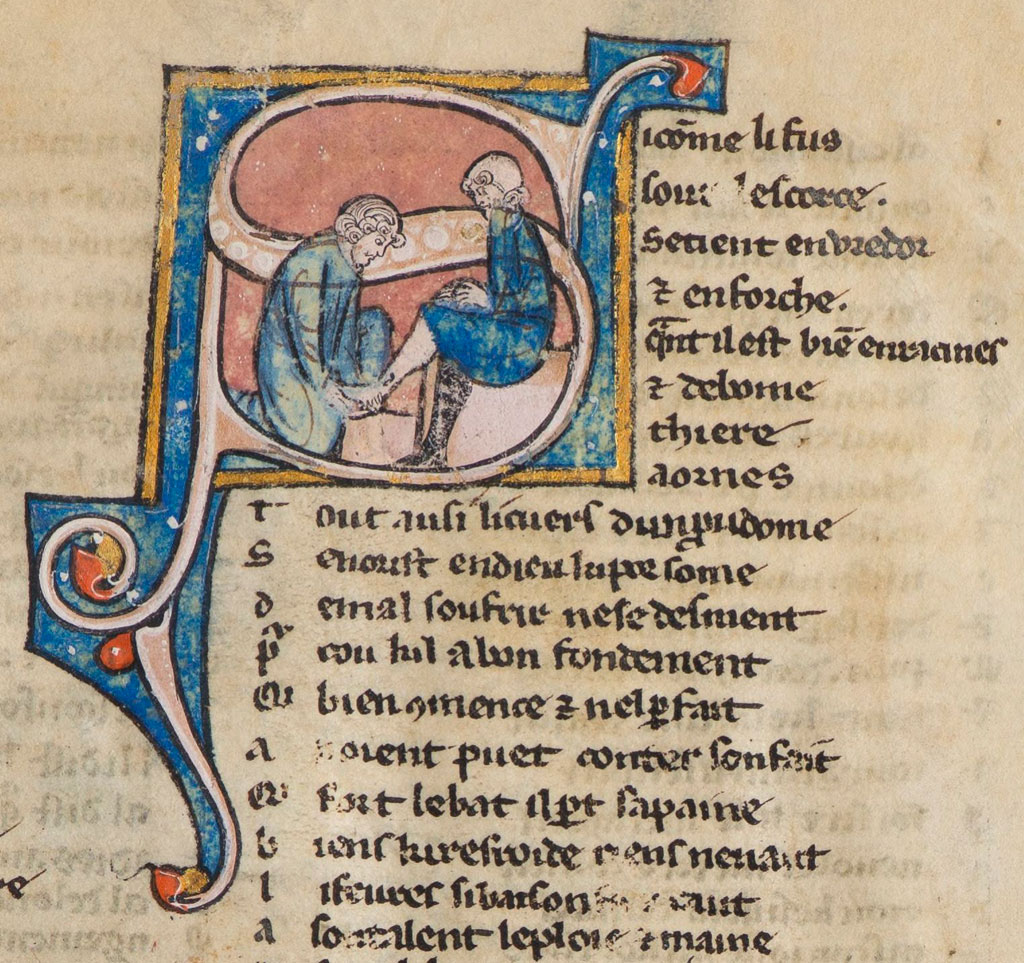 Lacking a divine gift of women, ordinary men relied on their own efforts. Their efforts tended to position them as abject women-servers:

Bright shining star, with beautifully radiant face,
here I am. Suffer your servant to speak.
If your nobility, probity, and beautiful figure
are rightly praised, nothing remains like you.
You exceed in your outstanding figure all young women,
and you would conquer Venus, if she weren’t a goddess.
…
When I don’t see you, I pine and long to be seen by you.
Contemplating you, I die, for my love burns so fiercely.
I’m already your servant. If you please, I will give myself
to you and do what you alone command me to do.
If you should look at me or stoop to love me,
I would rejoice more than if kingdoms were given to me.
I pray only for this: that you acknowledge your servant worthy of your love,
so that through you he may live, you who are my life and my salvation! 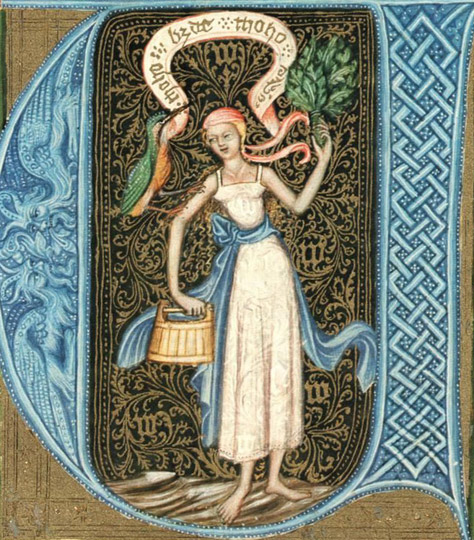 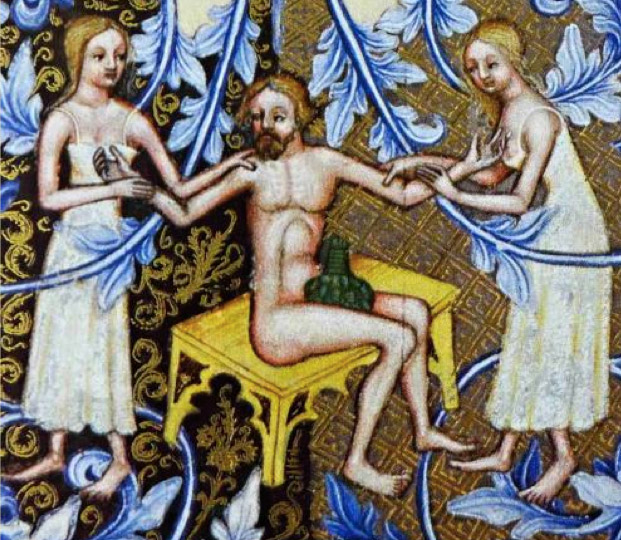 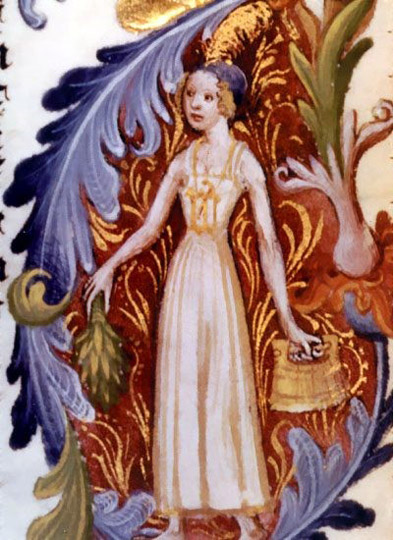 Medieval literature recognized men’s interest in having more than one woman. In the Old French Romance of the Count of Poitiers {Roman du comte de Poitiers}, composed about the year 1240, a king had a beauty show in which thirty young beautiful women stripped naked for his judgment. The king concluded that he would like to have all thirty as wives and lovers.[3] The Old French lay Ignaure, from perhaps a few decades earlier, describes Ignaure carrying on simultaneous love affairs with twelve noble women living in one castle. The thirteenth-century fabliau About the young man of the twelve wives {Du vallet aus douze fames} describes a man wanting to have twelve wives. Libro de buen amor from the fourteenth century recounts how a lusty young miller aspired to three wives. The miller came to realize that he was barely strong enough to satisfy one wife. He evidently was no sexual superhero like Charlemagne’s peer Oliver.

Popular medieval wisdom with good reason instructed men to limit themselves to just one woman for intimate relations. A medieval biographical fictionalization of the classical poet Ovid began, “Oh, how dear to me and how desirable was the female sex {O quam carus erat mihi quamque optabilis ille femineus sexus}!” Nonetheless Ovid, regarded in medieval Europe as a great teacher of love, declared:

In truth, as the popular saying holds,
having a hundred young woman is like having none,
and likewise having one counts as having a hundred,
since you will be no one’s while none claims possession of you,
and one will be as sufficient as if you alone had a hundred.
Everyone chooses for himself what he prefers, and what
doesn’t please him, he refuses. As for myself, I know that
I would want one young woman more than none, and an agreeable one
more than many young women, one of whom might slander me.

Ovid’s morality is based on individual choice (what one prefers) in relation to consequences (risk of slander). The popular saying makes no explicit reference to Christian morality. It’s historically appropriate for Ovid living at a time before Jesus.

The popular saying implicitly supports Christian morality of love. In Christian understanding, love is a complete, freely given gift of self to the beloved. A complete gift of self can be to only one person. Moreover, Christian spouses owed each other unlimited acts of sexual intercourse within the context of loving care for each other. In the narrow sense of sexual opportunities, one Christian spouse is as sufficient as a hundred.

Medieval men passionately desired many women. In actual love practice, medieval men often made themselves subservient to just one woman. Men’s burden of subservience to women deterred men from having multiple concurrent amorous relationships. Men’s risks in love with women and Christian moral teaching also steered men away from having multiple ongoing sexual relationships with women. Popular medieval wisdom that having one woman was better than having a hundred shows ordinary reason enlightening medieval men’s desire.

[2] On love {De amore} vv. 79-84, 105-12, Latin text and English translation (modified) from Hexter, Pfuntner & Haynes (2020) pp. 352-5. This poem is an extract from the twelfth-century poem known as Facetus: Moribus et vita or the Facetus of Aurigena. At the University of Krakow in medieval Poland, this text was used to teach Latin grammar and the art of composing letters {ars dictandi}. Jegorow (2018).

Ovid earlier held a rather different view on the merits of having many women:

Fair ones capture me: I’m captured by young blonde women,
but Venus is still pleasing with dusk-colored ones.
If dark tresses hang on a snowy neck,
then Leda was famed for her black hair.
If they’re blonde, Aurora’s saffron hair pleases.
My desire adapts itself to all the stories.
Young girls entice me, older ones move me —
she pleases with her body’s looks, she with its form.
In brief, whichever young women one might commend in the city,
my desire has ambitions on them all.

[image] (1) Man putting a slipper on a woman’s foot. Illumination from instance of Recueil d’anciennes poésies françaises. Folio 18r of manuscript Bibliothèque nationale de France. Bibliothèque de l’Arsenal. Ms-3527. (2-4) Images of bathhouse women from Bible of Wenceslas IV {Wenzelsbibel / Bible Václava IV}, created about 1400. From Österreichische Nationalbibliothek Codex Vindobonensis 2759-2764. Wenceslas / Wenceslaus IV, of the House of Luxembourg, was King of Bohemia from 1378 until his death in 1419. The Bible of Wenceslas IV contains the Biblical text in German and is one of the earliest German-language bibles. Here’s some information about Wenceslas and his beloved bath attendant Susanne.