Good lady, you may burn or hang him
or do anything you happen to desire,
for there’s nothing that he can refuse you,
as such you have him without any limits. 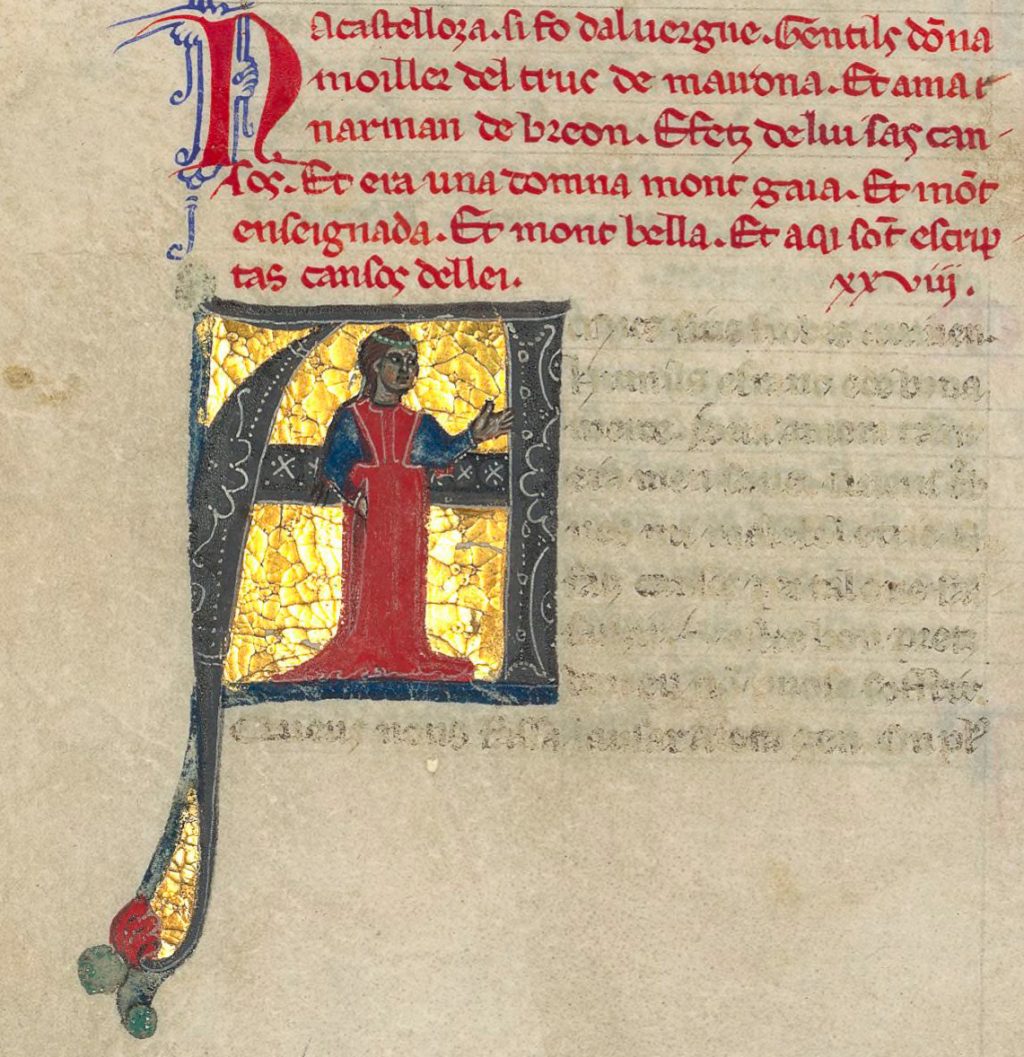 Men have long been sexually disadvantaged. While men’s structural disadvantages are scarcely acknowledged within gynocentric society, a small number of medieval women writers courageously advocated for men. In Occitania early in the thirteenth century, the extraordinary trobairitz Lady Castelloza spoke out boldly against gender inequality in love and men having the status of serfs in sexual feudalism.

And if she tells you a high mountain is a plain,
agree with her,
and be content with both the good and ill she sends;
that way you’ll be loved.

Just as is the case for many women today, many medieval women didn’t adequately support and defend men. When Giraut de Bornelh asked his lovely friend Alamanda about his love difficulties, she advised him to be totally subservient to his lady. Alamanda was a maiden to that lady. Lord Giraut apparently had lost his lady’s love by seeking sex with a woman who was not her equal, probably none other than her maiden Alamanda. But what had that lady done to him? She had lied to him at least five times before! When women speak, men should not just listen and believe. Unwillingness to question a woman led a Harvard Law professor to personal disaster. Men should not act as doormats for women or as women’s kitchen servants.

The trobairitz Maria de Ventadorn insisted to Gui d’Ussel that a woman should retain her superior position even in a love relationship with a man. Gui felt that men and women in love should be equals. But Maria wanted men to fulfill all the pleas and commands of their lady-lovers. That’s the pernicious doctrine of yes-dearism. Just say no to female supremacists!

Lady {Maria de Ventadorn}, among us they say
that when a lady wants to love,
she should honor her love on equal terms
because they are equally in love.
…
Gui d’Ussel, at the beginning lovers
say no such thing;
instead, each one, when he wants to court,
says, with hands joined and on his knees:
“Lady, permit me to serve you honestly
as your servant man” and that’s the way she takes him.
I rightly consider him a traitor if, having given
himself as a servant, he makes himself an equal. 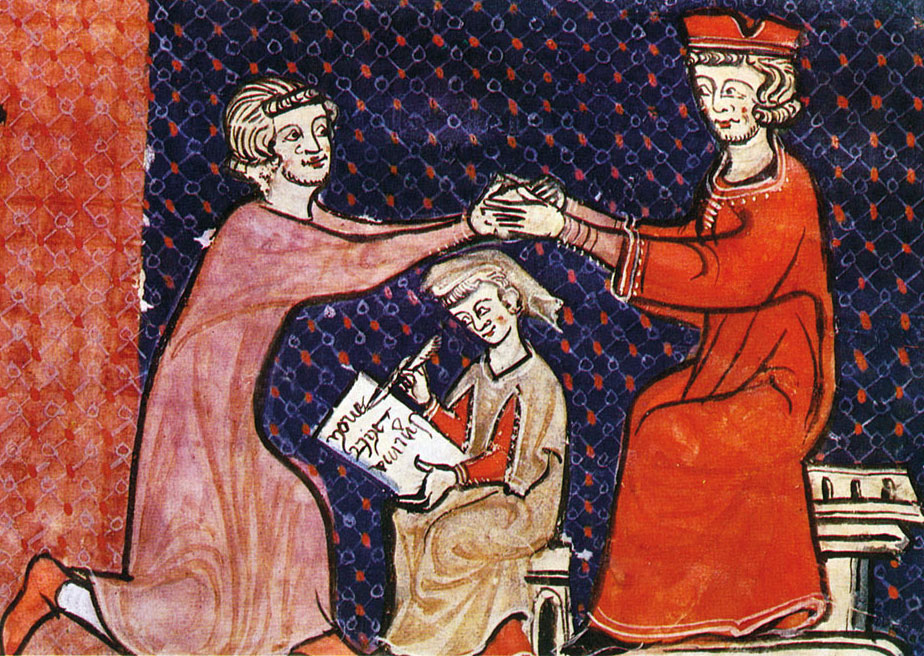 Because of their great love for women, men are reluctant to demand that women treat them with equal human respect and dignity. Men tend toward gyno-idolatry. The man on his knees before a woman, with his hands clasped, is making a gesture of faithful subordination. She then puts her hands around his hands to complete this feudal gesture known as the immixtio mannum {intermingling of hands}. A man today who goes down on his knee to ask a woman for her hand in marriage is preparing to be a vassal to his woman-lord midons. That’s folly. That’s fine preparation for a sexless marriage. From studying Ovid the great teacher of love to modern empirical work on sexual selection, men should know that self-abasement is a losing love strategy.

Oh Love, what shall I do?
Shall we two live in strife?
The griefs that must ensue
would surely end my life.
Unless my Lady might
receive me in that place
she lies in, to embrace
and press against me tight
her body, smooth and white.
…
Good Lady, thank you for
your love so true and fine;
I swear I love you more
than all past loves of mine.
I bow and join my hands
yielding myself to you;
the one thing you might do
is give me one sweet glance
if sometime you’ve the chance.

The medieval trobairitz Castelloza sympathized with men’s subordination in love. She loved a man who didn’t love her. A woman today in such a situation might open a dating app and enjoy a huge number of solicitations from men. Then, if necessary to boost her self-esteem, she might go for sexual flings with a few, or at least exploit traditional anti-men gender dating roles to get some free dinners. With a keen sense for social justice, Castelloza refused to live according to such female privilege:

I certainly know that it pleases me,
even though people say it’s not right
for a lady to plead her own cause with a knight,
and make long speeches all the time to him.
But whoever says this doesn’t know
that I want to implore before dying,
since in imploring I find sweet healing,
so I plead to him who gives me grave trouble.

Castelloza recognized that, in pleading with a man for love, she was transgressing the norms of men-oppressing courtly love. When women treat men merely as dogs, women don’t experience the full gift of men’s tonic masculinity. The master dehumanizes herself in dehumanizing her man-slaves. Castelloza, in contrast, understood that a man’s love can ennoble a woman. She understood that a man can offer much to even the most privileged woman.

I’m setting a bad pattern
for other loving women,
since it’s usually men who send
messages of well-chosen words.
Yet I consider myself cured,
friend, when I implore you.
for keeping faith is how I woo.
A noble women would grow richer
if you graced her with the gift
of your embrace or your kiss.

Men’s lack of imagination and unwillingness to protest helps to keep them in their gender prison of gynocentrism. Men rightly appreciate, admire, and love courageous, transgressive women like the trobairitz Castelloza. But men must take responsibility for winning their own liberation. A man showing loving concern about his close friend getting married isn’t enough. Men should be more daring and, like Matheolus, raise stirring voices of men’s sexed protest. Men Going Their Own Way (MGTOWs) struggled against misandry and castration culture even in the Middle Ages, and they continue to do so today. MGTOW is merely prudent personal action. To dismantle gynocentric oppression, men must recover, create, and disseminate protest poetry as potent as the medieval troubadours’ feudal songs of men’s love serfdom.

Peire, if spanning two or three years
the world were run as would please me,
I’ll tell you how with women it would be:
they would never be courted with tears,
rather, they would suffer such love-fears
that they would honor us,
and court us, rather than we, them.

Men’s abasement in sexual feudalism is pervasive in trobairitz song. Men engage in gyno-idolatry and imagine that they will die without a woman’s love:

I bow down to you, whom I love and adore,
and I am your liegeman and your household servant.
I yield myself up to you, who are the noblest
and the best being that was ever born of a mother.
And since I cannot help but love you,
for mercy’s sake, I beg you, don’t let me die.

by virtue of being a woman she is below him socially, thus rendering her statement simultaneously true and drawing attention to the place of women in society as opposed to the artificial pedestal they sit upon in traditional Troubadour poems. Regardless of her title, class, or wealth, in love, much like in life, the woman is beneath the man and must beg his favor like Castelloza here does.

Yup, so Anne of France was beneath day-laboring men gathering stones in fields.

Much influential recent scholarship on trobairitz has been based on dominant gender delusions. A relevant critique:

Gravdal’s argument here is based on her assumption that, for the men, powerlessness is a pose, a rhetorical strategy; the male speaker adopts an abased position only to use it as a springboard to higher status and sociopolitical clout. That Castelloza’s speaker does this as well is frequently overlooked, because it is assumed that for the women, powerlessness is a reality. This assumption is not supported by the evidence for noblewomen’s sociopolitical situation in Occitania during the time of the trobairitz.

Almost smirkingly Castelloza acknowledges that her behavior sets a terrible example for all other female lovers while synchronously encouraging them to do the same. She is not apologizing as much as drawing attention to the solidarity between women who will now partake in this perhaps liberating behavior and act upon their desires as opposed to remaining within the confined roles of passive love interests.

In Castelloza’s songs, the man she loves has neither voice nor activity. Siskin & Storme (1989) pp. 119-20. Self-centeredness is a common characteristic of women’s writing, particularly in the last few decades of literary scholarship.

Bernart de Ventadorn was one of the greatest troubadour love poets. His desire for women to experience men’s subordinate position in love is coupled with appreciation for gender equality and reciprocity in love:

The love of two good lovers lies
in pleasing and in yearning’s thrill
from which no good thing will arise
unless they match each other’s will.
The man was born an imbecile
who scolds her for her preference
or bids her do what she resents.

McQueen, Kelli. 2015. That’s Debatable!: Genre Issues in Troubadour Tensos and Partimens. Thesis for Degree of Master of Music. Theses and Dissertations. Paper 819. The University of Wisconsin-Milwaukee.

Siskin, H. Jay and Julie A. Storme. 1989. “Suffering Love: The Reversed Order in the Poetry of Na Castelloza.” Ch. 6 (pp. 113-127) in Paden, William D., ed. The Voice of the Trobairitz: perspectives on the women troubadours. Philadelphia: University of Pennsylvania.