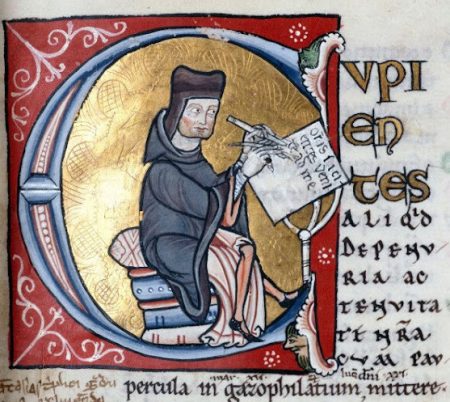 Unlike a more humane, more passionate understanding of chivalry, the long-reigning ideology of courtly love deepens men’s subordination to women. Courtly love ideology proclaims that women are morally superior to men. It urges men to labor for women’s “ennobling  love.” Peter Lombard, medieval Europe’s most influential systematic theologian, rejected that ideology.[1] Drawing upon the most highly regarded Jewish and Christian authorities, Lombard established in his monumental Sentences that men and women in love are intended to have an equal conjugal partnership.

Peter Lombard understood the creation of Eve from Adam’s rib to indicate that women and men belong together in an equal partnership. In his Sentences, he explained:

she {Eve} was formed not from just any part of his body {Adam’s body}, but from his side, so that it should be shown that she was created for the partnership of love, lest, if perhaps she had been made from his head, she should be perceived as set over man in domination; or if from his feet, as if subject to him in servitude. Therefore, since she was made neither to dominate, nor to serve the man, but as his partner, she had to be produced neither from his head, nor from his feet, but from his side, so that he would know that she was to be placed beside himself

Lombard emphasized that marriage is a conjugal partnership of equals:

consent to carnal joining or to cohabitation does not make a marriage, but consent to conjugal partnership, expressed by words of present tense, as when a man says: I take you as my wife, and neither as one to lord it over me, nor as a slave-girl. … she is not given as slave-girl or as one to lord it over him; in the beginning she was not formed either from the highest part, nor from the lowest, but from the side of man, for the sake of conjugal partnership.

Courtly lovers abase themselves and pedestalize women. Yet woman are flesh-and-blood humans just like men are. Those who believe otherwise deny human nature and deny revelation that ancient Jewish and Christian authorities understood.

Many Christians have believed in the sinfulness of man in the sense of those today decrying “toxic masculinity.” Medieval theologian Peter Lombard, in contrast, provided sympathetic understanding of Adam’s sin.[4] According to Lombard, Adam knew that eating fruit from the tree of knowledge was a sin, but, out of concern for Eve, Adam didn’t go his own way:

Adam … reflected on penance and God’s mercy, even as he humoured the woman and consented to her persuasion, not wishing to sadden her and leave her alienated from herself, lest she should perish. He judged that it {eating the fruit} was a venial, not a mortal, sin.

Adam’s fundamental sin was being too meek and submissive toward a woman. Courtly love encourages and celebrates exactly that horrendous sin.[6]

In our age of ignorance, superstition, and bigotry, many believe that men are privileged relative to women. These believers believe that violence against women is the most pressing human rights problem in the world today. The fact that violence is much more frequently directed against men doesn’t matter to the believers’ beliefs about gender equality. The believers shudder at perceived threats to women’s constitutionally established reproductive rights, but they show no concern about forced financial fatherhood currently imposed on men and men having no reproductive rights whatsoever. The believers look upwards and gaze upon the genitals of mega-corporation CEOs and national political leaders. They don’t see the gender of the many more numerous persons authoritatively deprived of custody of their children or locked up in prison and jails, even when those persons are their relatives and neighbors. We are living in a Dark Age.

We have never been medieval like the medieval theologian Peter Lombard. His systematic, enlightened thinking about women and men in love rejected the oppressive, gynocentric ideology of courtly love. Although highly influential, Lombard’s reason wasn’t enough to overcome the darkness in which men disbelieve what they see with their own eyes.[7] Better education in medieval literature offers men and women the best hope for enlightenment.

[1] Born about 1100, Peter Lombard became a professor at the cathedral school of Notre Dame in Paris about 1145 and Bishop of Paris in 1159. He was a renowned master-teacher who engaged with other leading theologians such as Hugh of St. Victor and Peter Abelard. Lombard finished his second and final draft of the Sentences in 1158.

Lombard’s Sentences became the most commented upon Christian work other than the Bible. More than 1,400 commentaries on it are known to have been written. Lombard’s Sentences was the standard university-level textbook on theology from the early thirteenth century to the mid-sixteenth century throughout western Europe. Rosemann (2004) pp. 3-4. On its influence, Rosemann (2007).

From the middle of the eleventh century to the Fourth Lateran Council of 1215, clerics trained in cathedral schools rose in influence to become the agenda-setters and arbiters of elite reasoned belief. The University of Paris, which helped to institutionalize clerics’ broad societal importance, was founded about 1150 as a corporation associated with the cathedral school of Notre Dame in Paris. For intellectual history of Lombard’s Sentences within the socio-intellectual development of the clerical class, Monagle (2013).

[2] Peter Lombard, Libri Quatuor Sententiarum {Sentences}, Bk. 2, Distinction 18, Ch. 2, from Latin trans. Silano (2007) Bk. 2, p. 77. Silano’s translation is based on Ignatius Brady’s 1971 critical edition. The Latin text is from the Quaracchi edition of 1916, available online at Magister Sententiarum. While the Quaracchi edition has faults, they don’t seem relevant to the quotes above.

Scholars today find Lombard’s view surprising for the wrong reasons. For example, Finn (2011), p. 60, called Lombard’s view on conjugal partnership “a surprising conclusion, given the patriarchalism of his world and his sources.” Notional patriarchy is merely the integument of gynocentrism. Lombard’s view is surprising in its overt recognition of the possibility of women’s dominance and its decisive rejection of that dominance. The situation within local churches may have been particularly salient to Lombard’s concern about women dominating men.

[4] A particularly shameful example of claiming “toxic masculinity” is pathologizing men who are vastly disproportionately victims of lethal violence. The influential work of Augustine of Hippo taught that the sin of Eve and Adam is propagated through all subsequent humans through men’s semen. See Augustine, On Marriage and Concupiscence.

From our contemporary perspective, Lombard’s description of Adam’s motives for sinning must appear slightly amusing

Rosemann (2007) p. 110. Lombard’s description might not appear amusing to those who judge our contemporary orthodoxy about demonic males to be absurd and hateful.

[6] Silano began the introduction to Lombard’s Sentences with a story honoring a woman’s adultery:

A story that was already old by the end of the Middle Ages had it that there had once been three brothers, born of an adulterous union. Their mother, on her deathbed, confessed her sin, and her confessor, noting its gravity, urged her to much sorrow and penance. The woman acknowledged that adultery is a great sin, but professed an inability to feel compunction, in view of the great good that had come of it, since each of her sons had become a luminary in the Church. The confessor agreed that her sons had done much useful work for the Church, but this had been God’s gift; her contribution had been the commission of adultery, and for this she ought to sorrow, or at least she ought to sorrow at her inability to feel sorrow. The three brothers born of this unrepented sin were Peter Comestor, Gratian, and Peter Lombard.

[7] Literature and philosophy throughout history have generally failed to recognize men’s distinctively masculine being and have tended to consider humans generically. That failure is starkly apparent in Johnson’s Dictionary (1755) and continues in current scholarship. Monagle (2015) provides a gynocentric perspective on Peter Lombard’s failure to appreciate men’s distinctively masculine being.

[image] Peter Lombard within illuminated initial from one of the earliest manuscripts of Lombard’s Sentences. Lombard is writing Omnes sitientes venite ad me {all you who thirst, come to me}. A scribe named Michael of Ireland wrote this manuscript in 1158. Michael plausibly worked for the abbey of St. Victor in Paris. He thus would have seen Peter Lombard in person. Rosemann (2004) pp. 41-2. Illumination from Troyes. Bibliothèque Municipale MS 900, fol. 1r. Image thanks to Wikimedia Commons.

Silano, Giulio, trans. 2007-2010. Peter Lombard. The Sentences {Libri Quatuor Sententiarum}. 4 vols. {Book 1: The mystery of the Trinity; Book 2: On creation; Book 3: On the Incarnation of the Word; Book 4: On the Doctrine of Signs}. Toronto: Pontifical Institute of Mediaeval Studies.