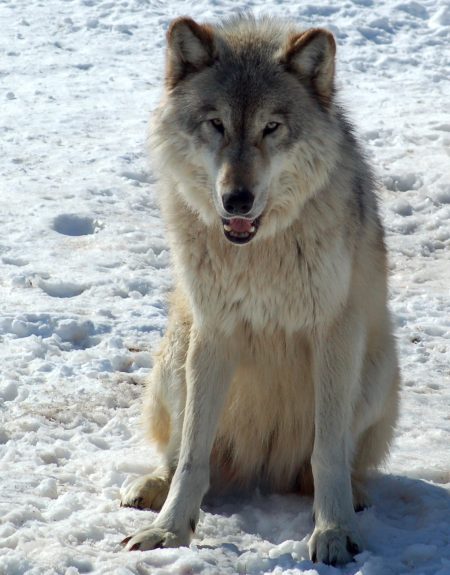 A ninth-century Jewish text coming from Babylon set out a song of gratitude for Jews to use in celebrating the Passover Seder. The song hypothesizes fifteen gifts of God to the Jews. After each gift is supposed, the persons around the table respond, “דַּיֵּנוּ‎ {Dayenu}!” This response means, “That would have been enough for us.”[1] In mid-twelfth-century Flanders, a Christian cleric incorporated the spirit of the Jewish song into the outrageous Latin beast epic Ysengrimus. Using “That is enough” to express gratitude to God subsequently became an important part of Christian devotional practice.

In the Ysengrimus, a monkish wolf named Ysengrimus is always nearly dying to eat more. Ysengrimus’s treacherous pseudo-nephew Renard the fox counseled him:

I know of ponds, stocked with innumerable fish;
the greater number die in the cramped conditions of the stream.
The fisherman, so that the fish remaining might be able to swim,
agreeably draws in one fish that has been shoved towards him by another.
Nor do I think anyone is better equipped than you
to empty this place crammed with monsters.
Although the recesses of your belly are so abundant and roomy,
if you’re not stuffed full there, you never will be.

Ysengrimus cried out with joy at this good news. He immediately renounced eating meat. He urged Renard to take him to the pond as quickly as possible so that he could start catching fish.

Ysengrimus used the phrase “that is enough” to describe his desire for fish. Ysengrimus, a wolf who identified as a monk, disparaged monks’ gluttony:

I say “That is enough”  when I’m sated, while a monk still says, “That is not much.”

Yet Ysengrimus immediately went on to declare his desire for an enormous amount of fish:

Would the weight of a heap protruding eight miles above the clouds
be too much for me if it were placed on my back?
But no, it’s easy for me to carry those that the waters conceal;
I pray that none may swim away until I say, “That is enough.”
If kind Fortune smiles on my attempts,
I’ll drag off enough to be sufficient for me for ten years.

On a winter’s day, Ysengrimus stuck his tail through a hole in the ice covering the pond. Imagining his tail to be a fishing implement, Ysengrimus the wolf sat above the hole like an ice fisherman. He hoped to pull in a large catch of fish.

Ysengrimus unreasonably rationalized being greedy. Reynard advised him to be satisfied with catching small fish:

Take care not to catch salmon or sturgeon or huge pike,
in case you’re immobilized by their excessive size.
Take eels and perch and smaller fish
that for you may be easy to raise, even though a numerous heap.

Keep your opinion to yourself; I’m directed by my own counsel!
By this gray head, if I were as well acquainted with the water
as I am with all the crisscrossing tracks of the woods,
only because I wasn’t yet ready to plunder the waters,
would Jonah lack an avenger up to now.
Shall I prefer a crab to a sturgeon or a dolphin to a whale?
That isn’t what my father did or advised.
The smaller the mouthful, the more unhappily it goes down.
Small portions are the devil’s; full abundance is of God!
…
So I’ll fish by whatever rule I like.
There’s a certain similarity between the greedy man and God:
the greedy man wants everything, and God has and gives everything.

Ysengrimus was very greedy. He even believed that God favored the greedy.

When he first felt ice starting to form around the top of the hole, Ysengrimus should have said “that is enough.” Instead, he waited, hoping to pull in an enormous catch. He subsequently found his tail to be frozen to the ice. He called out to Reynard for help:

If you don’t mind, freeze your step! …
I didn’t think my catch would be so numerous as I feel it to be.
My load of booty holds me back; help me!
…
All of Scotland is hanging onto my arse.
Eleven times I’ve stuck fast while trying to be freed.
I’m fettered, sitting more firmly than the motionless Alps.

Ysengrimus would have given much more than thirty pieces of silver to be free.[4] Even without catching any fish, he should have said “That is enough.” Yet because of his ingratitude and greed, he became another horrifically wounded victim of castration culture.

The witness of Saint Francis Xavier testifies to the enduring influence of the Ysengrimus on Christian devotional practice. In 1534, while a student at the eminent University of Paris, Francis Xavier along with six other students unofficially founded what became the Society of Jesus (the Jesuits). Francis and the Jesuits were renowned for their scholarly learning and fearless missionary zeal. Francis, who died in 1552, was formally canonized as a saint in 1622. In 1637, his body was placed in a magnificent silver casket. On the top of his casket is a cross and two angels. One of the angels holds a legend that reads:

When he felt the spiritual blessings of God, Saint Francis called out these words.[5] They come from the rich cultural stream containing the ancient Jewish Passover song of gratitude and the foolish greed of the wolf-monk Ysengrimus.

“That is enough” are words for everyone to remember. Recall with gratitude the gifts you have been given. Don’t get your ass frozen to ice.

[1] This Passover song is recorded in a responsum of Amram. Amram was the head (goan) of the Talmud Academy of Sura in Babylon (present-day Iraq) during the ninth century. His resposum is now known as the Seder Rav Amram.

[4] Cf. Matthew 27:3. Ysengrimus failing eleven times to be free associates him with Judas, who was unlike the other eleven apostles.

[image] Gray wolf sitting on ice. Photo at the Wildlife Science Center in Minnesota on March 28, 2006. Thanks to Derek Bakken, who authored the source photo for this image and made it available on flickr under a Creative Commons By (2.0) license.