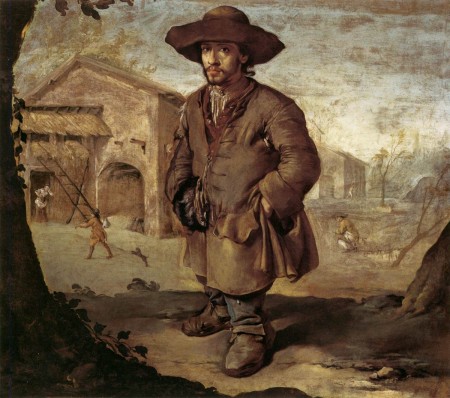 In the last surviving fragment of the eleventh-century Latin romance Ruodlieb, the title character Ruodlieb captured a dwarf. The dwarf promised to show Ruodlieb treasure. The dwarf in return asked to be unchained. Ruodlieb, suspecting deceit, refused to unchain him. The dwarf then protested:

Far be it that such fraud prevail among us dwarves!
For then we would not be so long-lived nor so healthy.
Among you, no one speaks unless deceitfully.
Therefore you will not attain a ripe old age.

Ruodlieb personally experienced the dwarf’s observation about deceit among humans. In Ruodlieb’s earlier, failed marriage proposal, deceit had filled all sides of the affair.

The lady whom Ruodlieb had sought as a wife had a reputation for integrity, virtue, chastity, and nobility. In reality, she was having a secret sexual affair with a cleric. She at first accepted Ruodlieb’s marriage proposal. To the messenger conveying that proposal, she responded with courtly love lyrics:

Beautiful words, but full of deceit, as subsequent events would show.

Ruodlieb cruelly deceived the lady he proposed to marry. She welcomed his love messenger with a sumptuous meal, the best wine, and mead served from golden vessels. Ruodlieb had arranged with his messenger for him to pretend to forget to give the lady a gift until after he had enjoyed her hospitality and she had responded to Ruodlieb’s proposal. The gift was sealed in a box. Ruodlieb deceived his messenger about the nature of the gift. When the lady opened the box, she found a scarlet cloth in which were wrapped her headdress and her garters. She had lost them at her cleric-lover’s house. Ruodlieb had somehow acquired them. The lady was mortified. She then gave the messenger a new message, with the same formal rhetorical figure as her earlier one, but different substance:

Tell your relative and friend that if
there were no other man alive save him alone,
and if he gave to me the whole world as a present,
I do not wish to marry him. You tell him truly!

The emphatic “you tell him truly” underscores the deceit on all sides of this affair. Ruodlieb, with mean obnoxiousness like his nephew’s bride had shown during their wedding, rejoiced and laughed at how he had tricked and insulted the lady that he proposed to marry.[4]

Ruodlieb depicts a world in which courtliness and noble character can suddenly vanish. The last surviving lines of Ruodlieb are uncannily apt. They depict the magnanimity of the dwarf’s wife. After Ruodlieb had captured her dwarf husband, she acted to save him:

Small, very beautiful, decked out in gold and clothes,
she fell at Ruodlieb’s feet, uttering complaints:
“Best of all men, release my husband from his chains!
Hold me for him until he settles his whole debt.”

When the courtliness of dwarves rises above that of knight and lady, romance has stagnated and the artistic poet has turned to parody.[6]

[1] Ruodlieb XVIII.18-21, Latin text and English trans. Kratz (1984) p. 199 (modified slightly). All subsequent quotes are from id. The Latin text of Ruodlieb is online. The phrase “no one speaks unless deceitfully” (nemo loquitur nisi corde doloso) has biblical resonances (cf. Jeremiah 17:9). Moreover, “doloso is rare in classical Latin, but common in the Vulgate.” Grocock (1985) p. 231. The promise of more life is central to Jewish and Christian scripture.

[2] Ruodlieb XVII.11-4, p. 191. On the lady’s reputation, XVI.65-70, XVII.35. The messenger seems to have been Ruodlieb’s nephew. Dronke (1970) p. 61. When the lady asked him about the local women (“their reputation, beauty, morals {famae, formosae sint an honestae}”), the messenger responded like the bishops in the Life of Saint Pelagia:

“I have no knowledge of what you ask me about,”
he answered with a smile, “for nothing matters less
to me than following things like the doings of
our ladies. I leave such behavior to the dandy.
If I walk by by a place where I see ladies standing,
I bow to them and keep my intended way.

[4] The messenger-nephew, much more willing to stand up to his uncle than to his bride, told Ruodlieb never to ask him to serve as his envoy again. Ruodlieb XVII. 57-8. Dronke, who relishes the bride’s obnoxious behavior, describes Ruodlieb’s trick as cruel and declares of the lady’s sexual affair with a cleric, “a perfect Christian would no doubt have forgiven” it. Donke (1970) p. 60. Following that pattern of thinking, if the lady had become a perfect Christian, she would have informed Ruodlieb that she rejected marriage and that she would emulate the penitent life of Mary of Egypt.

[6] Dronke’s influential analysis presents Ruodlieb as “the emergence of romance” and describes it as “the first medieval verse romance.” Dronke (1970) pp. 33-4. While manuscripts are lacking, Ruodlieb itself suggests a tradition of romance continuing from the Greek novels.

[image] The Dwarf. Giacomo Ceruti, 1720s. Oil on canvas. Thanks to Wikimedia Commons.