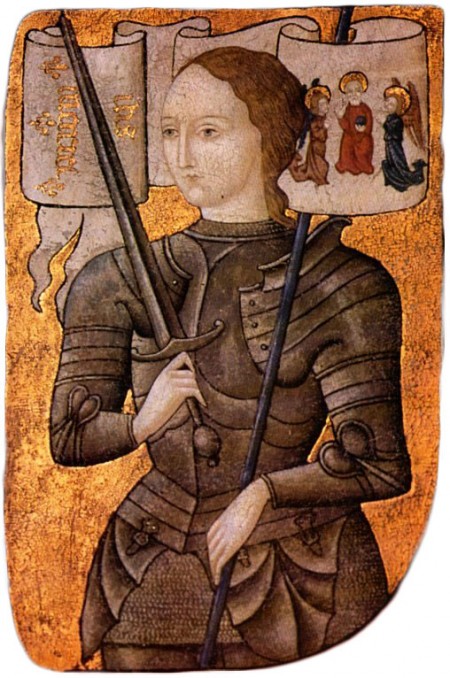 Heloise of the Paraclete, a leading figure in twelfth-century Europe, described women and men as by nature created unequal. She described women as the weaker sex, and men, the stronger sex.[1] These epithets, of course, are merely conventional, misleading descriptions of physical sex differences. Nonetheless, Heloise noted that St. Gregory the Pope had written gender inequality into his Pastoral Rule of 591:

men are to be admonished in one way, women in another; for heavy burdens may be laid on men and great matters exercise them, but lighter burdens on women, who should be gently converted by less exacting means.

Heloise sought to lessen women’s burdens. But she didn’t believe that women are generally inferior to men. She argued that women should be allowed any sort of food and drink, because women are less prone to gluttony and intoxication than are men.[3] Abelard, a leading scholar of logic, should have been able to figure that out.

we can see in his religious writings an exceptional theological exaltation of womankind. He is to my knowledge the first theologian to suggest that “the creation of woman surpasses that of man by a certain dignity, since she was created within paradise, but man outside it”; he argues that “inasmuch as woman is physically the weaker sex, to that extent her virtue is more acceptable to God and more worthy of honor”; Christ asks the Samaritan woman at the well for a drink of water “to indicate plainly that women’s virtue is the more pleasing to him in that they are weaker in person”; the saints who are virgin martyrs have achieved “a perfection of virtue that we know to be rare in men but frequent in women”. [4]

Abelard also declared that male bodies are not as beautiful as female bodies: “maidenly beauty is naturally considered more refined and softer than the male figure {naturaliter puellaris forma elegantior et delicatior virili compositione censetur}.”[5] Abelard has been an influential figure in Europe’s historical development of reason. His influence can be recognized in present-day elite scholarship.

Heloise, who delighted in Abelard’s body as well as his mind, teased Abelard for his attempt to recognize that she was not his inferior. She began a letter to him with a courtly admonishment:

I am surprised, my only love, that contrary to custom in letter-writing and, indeed, to the natural order of things, you have thought fit to put my name before yours in the greeting which heads your letter, so that we have woman before man, wife before husband, handmaid before lord, nun before monk and priest, and deaconess before abbot. Surely the right and proper order is for those who write to their superiors or equals to put their names before their own, but in letters to inferiors, precedence in order of address follows precedence in rank.

Abelard responded at length to explain that Heloise wasn’t his inferior. He sought to avoid Heloise’s blame and reproach.

Heloise taught Abelard boldness and courage. She had argued strongly to him against marriage when their sexual affair was discovered. Abelard, more reluctant to stand up to oppressive laws, insisted that they must marry. After much reasoned protest and tears, Heloise agreed to marry only so as not to offend Abelard.[7] Subsequent terrible events made clear to Heloise her mistake. Heloise became more bold and courageous. She wrote letters with honesty and truth, without concern for offending anyone. Heloise taught Abelard to write like she did.

Again and again women utterly destroy the very greatest of men!  Hence the warning about women in Proverbs: “But now, my son, listen to me, attend to what I say: do not let your heart entice you into her ways, do not stray down her paths; she has wounded and laid low so many, and the strongest have all been her victims. Her house is the way to hell, and leads down to the halls of death.” And in Ecclesiastes: “I put all to the test … I find woman more bitter than death; she is a snare, her heart a net, her arms are chains. He who is pleasing to God eludes her, but the sinner is her captive.”

It was the first woman in the beginning who lured men from Paradise, and she who had been created by the Lord as his helpmate became the instrument of his total downfall. And that mighty man of the Lord, the Nazirite whose conception was announced by an angel, Delilah alone overcame; betrayed to his enemies and robbed of his sight, he was driven at last by sorrow to destroy himself along with the fall of his enemies. Only the woman he had slept with could make a fool of Solomon, the wisest of all men; she drove him to such a pitch of madness that although he was the man whom the Lord had chosen to build the temple in preference to his father David, who was a righteous man, she plunged him into idolatry until the end of his life, so that he abandoned the worship of God which he had preached and taught in word and writing. Job, the holiest of men, fought his last and hardest battle against his wife, who urged him to curse God. The cunning arch-tempter well knew from repeated experience that men are most easily brought to ruin through their wives, and so he directed his usual malice against us too, and tempted you through marriage when he could not destroy you through fornication.

Heloise deserves equal credit for the Samson planctus ascribed to Abelard. Insightful scholarship has recognized the relation of the Samson planctus to Heloise’s writing, but misunderstood that relationship.[9] Abelard learned from Heloise. With that learning, he wrote poetic words of men’s sexed protest:

Oh, ever of the mighty
supreme destruction,
to such catastrophe
was created — woman!

She brought the father of all
down with due speed,
and the cup of death
she hands to everyone.

Holier than David,
wiser than Solomon,
who could be thought?
Or again, more impious —
through women’s fault — or more
fatuous,
who could be found?
Who among the strong
was like the strongest Samson
weakened?

The poem builds to a shocking concluding stanza:

Bare your breast to the asp —
bare it to fire sooner,
wise one, whoever you are,
than entrust yourself
to women’s wiles —
unless you should prefer
towards that catastrophe
to run inexorably
with those already named!

Adam, Solomon, and Sampson were commonly recognized to have been asinine in relation to women, with disastrous results. At the same time, in Christian understanding, they were major figures in salvation history. Boldness and courage imply recognizing danger and moving forward. With the help of Heloise, Abelard not only appreciated the literature of men’s sexed protest, but also greatly heightened its poetic form.[11] Heloise taught Abelard to move forward in Christian understanding with her.

[1] Heloise to Abelard, Letter 6.3, 6, 9, 10, 11, 27, Latin text and English trans. Luscombe & Radice (2013).  All subsequent quotes are similarly sourced, unless otherwise notes. Id. has Historia calamitatum as Letter 1.  Other collections have the subsequent letter as Letter 1.

[6] Heloise to Abelard, Letter 4.1. id. p. 159. Heloise’s implicit dominance is also evident in her sophisticated issuing of demands to Abelard:

we handmaids of Christ, who are your daughters in Christ, come as suppliants to demand of your paternal care two things

we are living in 2000, when, luckily, no judge in any civilized country would forgive the rapist Sichem’s offence.

In the U.S., the leading U.S. government public health institution has categorized men being raped as not real rape. It has obscured the fact that about as many men are raped as women are raped. Today, women who commit rape are much less likely to face punishment than men who commit that offense.

[11] Abelard’s achievement shouldn’t be exaggerated. He blamed only himself for his castration and demeaned his own male sexuality. He lacked the self-regard and social consciousness to recognize that his experience was part of a broader social pattern of violence against men. In Letter 1.69, Abelard cited a line from Juvenal’s Satire 6. Nonetheless, other than in his Samson planctus, Abelard did not show outstanding boldness and courage in thinking and writing about men’s social position.

Relative to some current medieval scholarship, Heloise and Abelard appear to be towering figures of Enlightenment thought. A recent doctoral dissertation on Heloise features as an epigram to its introduction a gyno-solipsistic absurdity:

What would happen if one woman told the story of her life? The world
would split open. — Muriel Rukeyser

St Jerome’s distasteful image of family life with just one significant revision: ‘What man, bent on sacred or philosophical thoughts, could endure the crying of children, the nursery rhymes of nannies trying to calm them, the bustling throng of male and female servants in the household? And what woman will be able to bear the constant filth and squalor of babies?’ Jerome twice wrote ‘what man’ (‘quis … quis?’), whereas Heloise quietly changed the second ‘quis’ to a ‘que’: ‘What woman?’ In short, we hear an educated woman asking disdainfully, in the early 12th century, how she could be expected to bear the filth and squalor of babies. This boggles even 20th and 21st-century minds.

That boggles the mind only of persons ignorant of important medieval literature. Boccaccio counseled men in relation to women:

Even if they have the grace to want children (which is not often the case), it is not necessary to be their slaves.

Orlandi, Giovanni. 2001. “On the text and interpretation of Abelard’s Planctus.” Pp. 327-42 in John Marenbon and Peter Dronke,eds. Poetry and philosophy in the Middle Ages: a festschrift for Peter Dronke. Leiden.

Posa, Carmel M. 2009. The Theology and Spirituality of the Body in the Writings of Heloise of the Paraclete. Doctor of Philosophy thesis, University of Divinity (Melbourne).